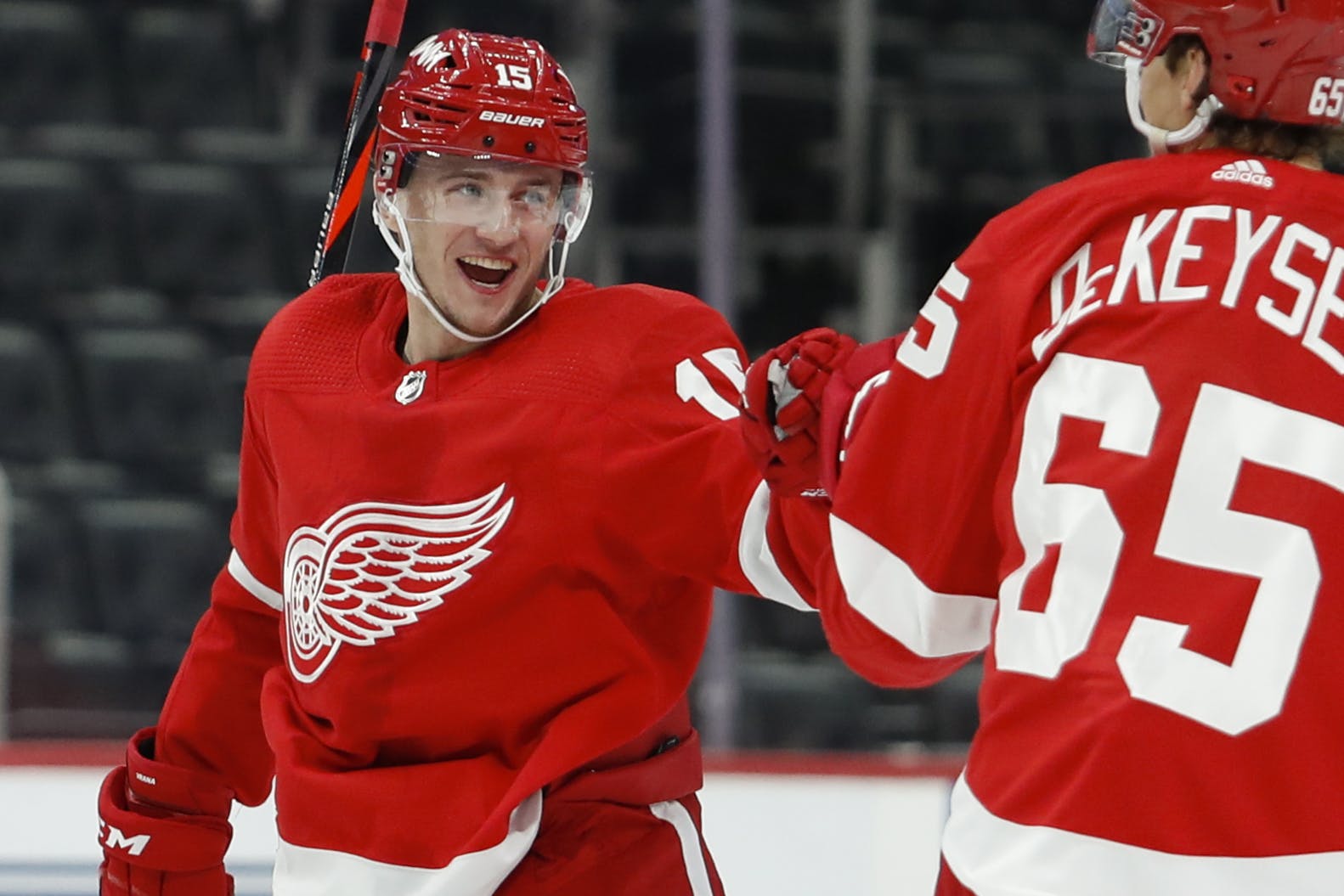 By Scott Ony
9 months ago
In the midst of their encouraging 2021–22 season, it’s easy to forget that the Detroit Red Wings have been without one of their most talented offensive forwards the entire way.
@Jakub Vrana only recently returned to practice in a blue non-contact jersey as part of his recovery from shoulder surgery. While there remains no definitive timetable for his return, MLive’s Ansar Khan reported on Tuesday that Vrana will be re-evaluated “in the next week or so” and could return to game action by the end of the month.
According to Khan, Vrana “reaggravated a previous shoulder injury” on the opening day of his first Red Wings training camp last September and has yet to make his 2021–22 season debut.
Vrana, 25, remains relatively unknown to many Red Wings fans, as he only appeared in 11 games with the team after being acquired from the Washington Capitals at the 2020–21 trade deadline. He certainly made an impression in his first go-round with the Wings, tallying eight goals and adding three assists to finish at exactly a point-per-game pace in Detroit.
Still, it’s fair to wonder what to expect from the former Capital when he eventually returns. Here’s a closer look at the ways the Red Wings benefitted from trading for Vrana — and what the 6′, 196-lb winger projects to add to this team’s promising young core.

The Red Wings and Capitals made one of the biggest splashes on the NHL’s trade deadline day in 2020–21.
On Apr. 12, 2021, the Wings sent power forward @Anthony Mantha to Washington in exchange for Vrana, @Richard Panik, a 2021 first-round draft selection, and a 2022 second-round pick.
Despite Vrana missing the entire 2021–22 season to this point, this trade already looks to be a home run by Red Wings general manager Steve Yzerman.
At the time of the trade, Mantha was in the middle of a down year — along with many of his teammates — with just 11 goals and 22 points in 42 games. Prior to the 2020–21 season, the Red Wings signed the two-time 20-goal scorer to a four-year contract extension carrying an average annual value (AAV) of $5.7 million.
Vrana is one year younger (and five inches shorter) than Mantha. When Detroit pulled the trigger on the deal, Vrana — set to become an RFA in the 2021 off-season — had 25 points in 39 games in 2020–21; he also ranked sixth in the entire NHL in goals (and 18th in points) on a per-60 minute basis over the previous three seasons.
Panik was a pricey UFA signing who had fallen out of favor in the second season of his four-year deal with the Capitals. The Red Wings managed to add more draft capital by taking on the second half of Panik’s $2.75 million-AAV deal.
Both of the draft selections Detroit received in the Vrana deal were Washington’s own. The Red Wings remain in possession of the Capitals’ 2022 second-round draft pick.
After the 2021–22 season ended, Yzerman flipped Panik and Edmonton’s 2021 second-round pick (acquired in the @Andreas Athanasiou deal and eventually used on Aatu Raty) to the New York Islanders for defenseman @Nick Leddy.
The Red Wings retained half of Panik’s salary, further incentivizing the Islanders to deal them an established veteran to aid the progression of youngsters @Moritz Seider and @Gustav Lindstrom (even if Leddy has been less impactful on the ice than anticipated). Leddy will likely be flipped before next month’s trade deadline, further extending the Vrana trade tree.

Before we even get to discussing Vrana, it can’t be overstated how the Red Wings set themselves up to benefit in the long-term by adding another 2021 first-round pick to their arsenal.
Washington sent Detroit its own 2021 first-rounder, which ended up being pick No. 23 in the draft, in the Vrana deal. That selection ended up being used to take center Wyatt Johnston … who is decidedly not a Red Wings prospect.
The Red Wings instead opted to trade up from pick 23 to 15, sending picks 48 and 138 in the 2021 draft to Dallas as compensation. (The Stars used those selections on defensemen Artem Grushnikov and Jack Bar).
After taking Simon Edvinsson with their own first-rounder (sixth overall), the Red Wings selected 6’6″ Edmonton Oil Kings goaltender @Sebastian Cossa with pick 15. Later on draft day, Corey Pronman of The Athletic provided his take on the Wings moving up to take Cossa:

Cossa is a true top goalie prospect and a key piece that Detroit was missing in its farm system, so an aggressive trade up makes a ton of sense. Outside of a true top center or two, it feels like a lot of the pieces are coming together for Detroit. Cossa has the upside to become an upper-echelon starting goaltender.

While some expected Swedish goaltender Jesper Wallstedt to be the first goaltender taken in 2021 (he eventually went to the Minnesota Wild five picks later), it’s safe to say we can trust Yzerman when it comes to drafting netminders in the first round. The last one he selected that high ultimately won two Stanley Cups, the Vezina Trophy, and the Conn Smythe Trophy.

In swapping Mantha for Vrana, the Red Wings managed to add a top-tier goaltending prospect and a future second-round pick to their organization. They also added a quality offensive forward, one who might even turn out to be an upgrade on Mantha.
Hailing from the Czech capital of Prague, Vrana was selected 13th overall by Washington in the 2014 NHL Draft. He became a regular in the Capitals’ lineup in time to win the Stanley Cup as a rookie in 2018.
Playing on a loaded Washington team, Vrana operated mostly out of a bottom-six role and never averaged more than 15 minutes per game during his entire five-season tenure with the Capitals.
Despite ranking eighth on the team with 14:02 per game in 2018–19, Vrana registered 24 goals and 47 points while playing in all 82 contests. He followed that up with 25 goals and 52 points while averaging just 14:53 in 69 games played during the 2019-20 season.
One of the NHL’s most efficient scorers during his tenure in Washington, Vrana also helped his team push play at both ends of the ice — although he undeniably had more impact in the offensive zone.
Mantha never surpassed 50 points in a season during his time in Detroit, although he did manage 25 goals and 48 points in 67 games with the team during the 2018–19 season. The 6’5″, 234-pound winger was nonetheless a fierce presence on the ice and a strong two-way forward as a Red Wing.
As Mantha slumped in 2020–21, Vrana remained largely consistent. He scored 11 goals and 25 points in 39 games with the team prior to the trade deadline — good for a 52-point pace in an 82-game season — but the Capitals still decided to move on from him.
Vrana exploded onto the scene with the Red Wings following the trade, immediately seeing his average ice-time increase from 14:22 in Washington to 17:16 in Detroit. He scored in his first game with his new team and had a four-goal performance a week later.
In the 2021 off-season, Yzerman rewarded Vrana with a three-year contract extension carrying an AAV of $5.25 million. He’ll be a 28-year-old unrestricted free agent when the deal expires in 2024.

After such a lengthy absence, it will be difficult for Vrana to come in and contribute immediately upon his return from injury. What we do know is he will be put in a position to succeed.
For now, the “Guelph Connection” line of @Tyler Bertuzzi, @Robby Fabbri, and @Pius Suter will likely remain intact. @Filip Zadina has impressed on the left side of @Dylan Larkin and @Lucas Raymond. If those lines remain intact, expect Vrana to potentially start alongside @Vladislav Namestnikov and @Michael Rasmussen as he gets back up to speed:
@Filip Zadina – @Dylan Larkin – @Lucas Raymond
@Tyler Bertuzzi – @Pius Suter – @Robby Fabbri
@Jakub Vrana – @Michael Rasmussen – @Vladislav Namestnikov
@Givani Smith – @Joe Veleno – @Sam Gagner
Extras: @Gemel Smith, @Carter Rowney, @Mitchell Stephens
Make no mistake: at his best, Vrana is a clear-cut top-six forward who fits the mold of an ideal winger in today’s NHL. In a bigger role, it’s not a stretch to think he can be a 30-goal scorer as the Red Wings continue to improve. Vrana has high-end skills with the puck and blazing speed that allow him to create offense all on his own.
It remains extremely impressive that Yzerman was able to acquire Vrana plus additional draft capital for Mantha. To this point in their respective careers, Mantha and Vrana have managed similar raw offensive production; however, Vrana is both younger and cheaper than his larger counterpart. (Mantha has also missed significant time with a shoulder injury this season).
With Vrana, Raymond, Bertuzzi, Fabbri, and Zadina in the fold, Detroit looks to be set on the wings for the foreseeable future. While it will be exciting to see what Vrana can do when he returns later this season, look for him to truly emerge in 2022–23.