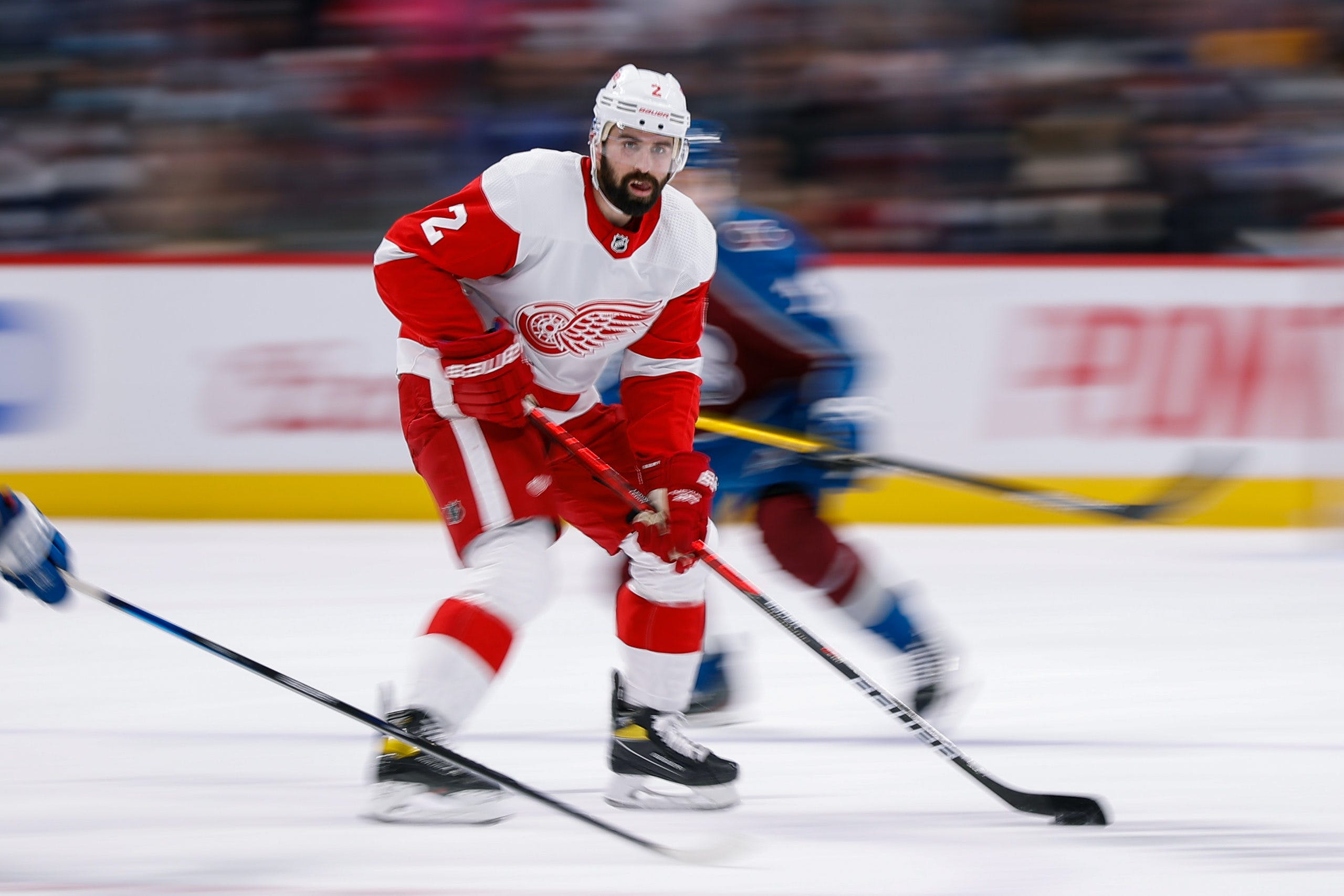 By Mike Gould
10 months ago
It’s time to hand out some more grades.
Last week, we assessed the individual members of the Detroit Red Wings’ forward group on their play through the first half of the 2021–22 National Hockey League season.
With the All-Star break now behind us, the time has come to focus on the Red Wings’ defensemen and goaltenders. From Calder Trophy contenders to declining veterans, all sorts of players will be discussed below.
We’ll start with the defensemen. Bet you can’t guess who received the top marks.

Part 1 (Forwards) can be found here!

Detroit Red Wings defenseman @Moritz Seider (53). Photo credit: Raj Mehta-USA TODAY Sports.
Moritz Seider (A+) — As if we would give him anything else! We here at WingsNation have already made our stance on Seider more than clear. He’s an excellent two-way defenseman playing in every conceivable situation while managing to elevate a partner who might not even be in the league next season. He’s the best rookie in the NHL and projects to contend for the Norris Trophy if he continues on his current trajectory.
Gustav Lindstrom (B+) — It’s been very encouraging to watch Lindstrom develop as a Low-Event King™ in a bottom-pairing role this season. The 23-year-old righty has consistently hummed along in his first full campaign with the Red Wings, becoming one of the team’s most heavily used defenders in shorthanded situations and posting a very good expected goal differential at five-on-five. According to Natural Stat Trick, Lindstrom ranks fourth on the Red Wings (behind only @Tyler Bertuzzi, @Dylan Larkin, and @Lucas Raymond) with a 50.19 on-ice expected goals percentage at full strength.
Marc Staal (B) — Ranking one spot behind Lindstrom on the Wings’ expected goal percentage leaderboard? The 35-year-old veteran Staal, who has been an ideal veteran presence in Detroit this year. Not a whole lot is expected to happen in either end when Staal is on the ice surface, although the Red Wings have been scoring at an inflated rate — 11.15 percent, second on the team behind Bertuzzi — during his shifts at five-on-five. As a result, Staal ranks second on the team with a plus-8 rating, but take that figure with a grain of salt. It wouldn’t necessarily be a bad idea for the Red Wings to give Staal another cheap one-year deal for the 2022–23 campaign.
Filip Hronek (B-) — Remember when we described Lindstrom as a “Low-Event King™”? Hronek decidedly does not live up to that moniker. The 24-year-old righty has been one of the Red Wings’ top offensive players this year — even if his finishing hasn’t quite been up to par — but his defensive results have been decidedly less encouraging. The only Red Wings defender on the ice for more expected goals against per 60 minutes this season (according to Natural Stat Trick) is also the only “F”-grade recipient on this list. Still, Hronek is paid to help the Red Wings score, and he’s done just that in all offensive situations this year.
Jordan Oesterle (C) — Look, Oesterle is decidedly more effective in his own end than the Red Wings’ No. 65. He’s also probably a better partner for Seider. But, all that being said, he’s still not especially effective in isolation. The Wings haven’t generated a whole lot in the offensive zone with Oesterle on the ice this season and, with one exception, he hasn’t been able to create many chances on his own. His defensive results have been solid, albeit likely bolstered by his time playing against weaker competition while on the Wings’ lower pairings.
Nick Leddy (D) — The Red Wings acquiring Leddy never made a whole lot of sense. It always seemed like a high cost to pay for a player on the decline who was unlikely to be part of a winning Wings team before the end of his contract. At best, the Red Wings must have hoped they might be able to get a first-round pick at the trade deadline if they retained half of Leddy’s $5.5  million cap hit. With the way he’s played this season, they’d be awfully lucky to recoup the second-rounder they dealt to the New York Islanders back in July 2021. Leddy has been unproductive (if, in fairness, a little unlucky), defensively porous, and very costly. That’s not a good combination.
Danny DeKeyser (F) — It’s been an incredibly difficult season for DeKeyser. Despite being paired with defensive wunderkind Seider for much of the year, DeKeyser has struggled mightily at both ends of the ice and was relegated to the press box for three games in late January (returning when Leddy suffered an upper-body injury). DeKeyser has dealt with significant health issues over the duration of his six-year, $30 million contract and is now a shell of the strong two-way defender he was in the early 2010s. Given his significant decline and the pending expiry of his current deal, it would be legitimately surprising to see DeKeyser stick around in the NHL beyond this season.
Troy Stecher (Inc.) — After being a positive influence on play at both ends of the ice in his debut go-round with the Red Wings, Stecher suffered a wrist injury and underwent surgery after playing just six games in 2021–22 and has been recovering ever since. The good news: Stecher started skating with the Red Wings in late January while wearing a non-contact jersey.

Detroit Red Wings goaltender @Alex Nedeljkovic. Photo credit: Timothy T. Ludwig-USA TODAY Sports.
Alex Nedeljkovic (A-) — Even without considering how little the Red Wings gave up to acquire him, Nedeljkovic has provided excellent value this season. According to Evolving-Hockey, Nedeljkovic ranks 19th among 100 NHL goaltenders this season with 5.51 goals saved above expected (GSAx); his 13–13–5 record and .911 save percentage have been enough to put him on the outskirts of the Calder Trophy race (after being named a finalist while with the Carolina Hurricanes in 2020–21). Already 26 years old, Nedeljkovic might not be the Red Wings’ goalie of the future, but he looks like a solid bet to be a legitimate starting option for the foreseeable future.
Thomas Greiss (D) — Whereas Nedeljkovic ranks in the top fifth of the league in terms of GSAx, Greiss currently places 78th out of 100 by virtue of having allowed 6.08 more goals than expected of him. The 36-year-old German was once a capable tandem option (particularly during his time with the New York Islanders) but now appears to be on his last legs. His .894 save percentage in 16 games this year ranks among the league’s worst in that category. Barring an extension (which looks less likely with every passing game), Greiss will become an unrestricted free agent in July.
Calvin Pickard (Inc.) — The 29-year-old journeyman has appeared in just two games with the Red Wings this season, making 36 saves to win his lone start (a 3–2 shootout victory over the Pittsburgh Penguins on Jan. 28). Once the starting goaltender and a rare bright spot on a truly horrendous 2016–17 Colorado Avalanche team, Pickard has since bounced around five different organizations while struggling to find a foothold in the NHL. He’s certainly made his case for a promotion this season, having posted a 13–10–5 record and a .922 save percentage in 29 appearances with the AHL’s Grand Rapids Griffins.