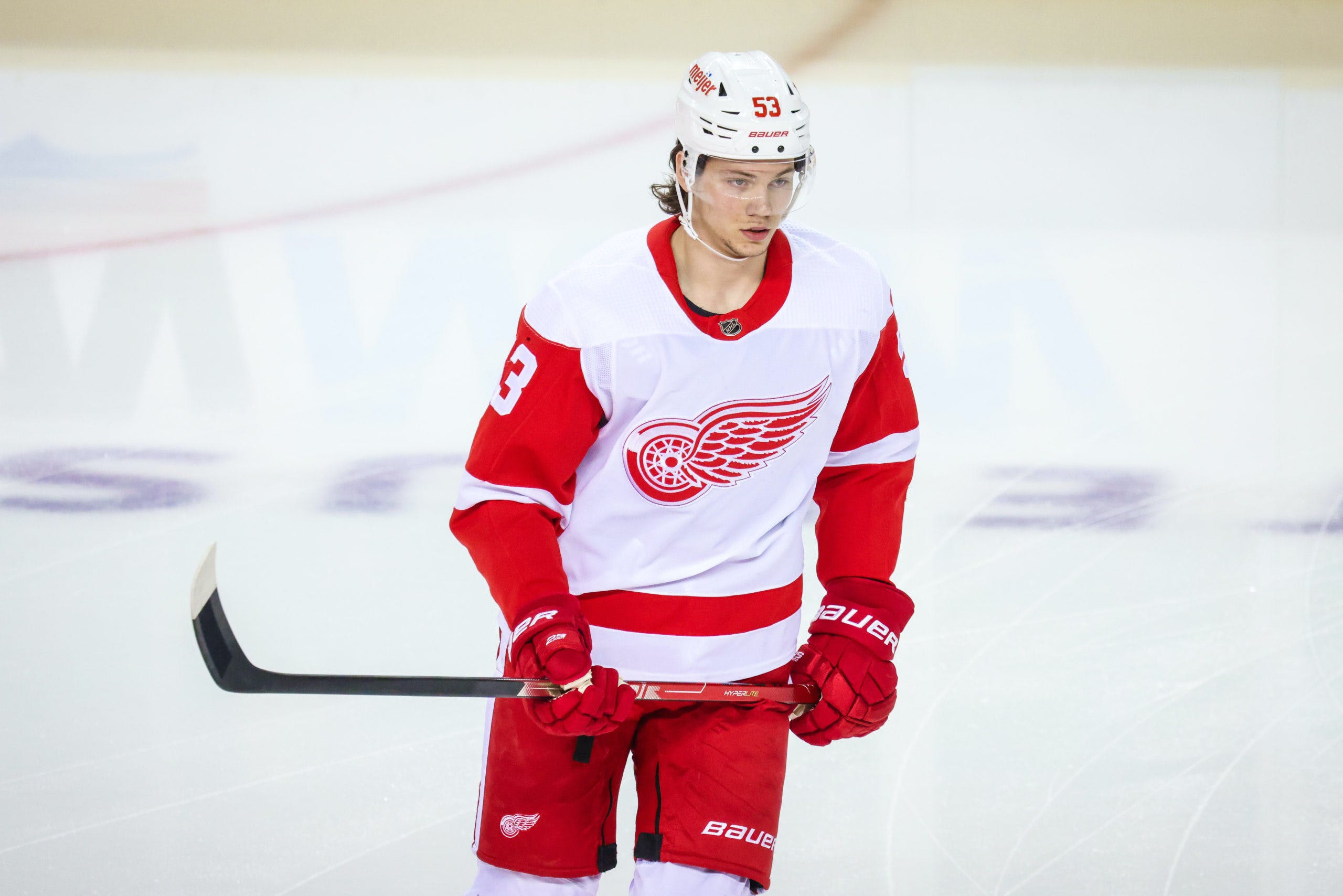 By Mike Gould
6 months ago
The debut seasons of @Moritz Seider and @Lucas Raymond will come to an end on Friday evening when the Detroit Red Wings take on the New Jersey Devils at Prudential Center (7:00 p.m. ET, Bally Sports Detroit).
In a season that has alternated between being exciting and frustrating, the Red Wings’ duo of rookie skaters has remained a positive constant.
Both Raymond and Seider have appeared in each of the Red Wings’ first 81 games of the 2021–22 campaign. The Swedish winger ranks third in team scoring with 23 goals and 56 points; Seider sits in fourth place with 49 points (six goals, 43 assists).
The Red Wings have won both of their games against the Devils this year, taking a 5–2 decision at Little Caesars Arena back on Dec. 18, 2021, before prevailing by a 3–0 score in Newark last week.
While Raymond and Seider are both still searching for their first goals against the Devils, fellow Detroit rookie @Alex Nedeljkovic posted a 17-save shutout in the victory on April 24.
Nedeljkovic has had an up-and-down year with the Red Wings, with his 20–24–9 record and .901 save percentage falling well short of what he managed in his brief tenure with the Carolina Hurricanes.
However, his four shutouts are the most by a Red Wings rookie since Roger Crozier compiled six in the 1964–65 campaign en route to winning the Calder Trophy. To this day, Crozier is still the last Red Wing to receive the NHL’s top rookie award.
While Seider and Raymond will almost certainly be in the Red Wings’ lineup in New Jersey on Friday, it remains to be seen whether the Red Wings will go with Nedeljkovic, @Thomas Greiss, or @Magnus Hellberg in goal.
Hellberg, 31, has yet to make a single appearance with the Red Wings (apart from being dressed as backup a couple of times) since joining the team earlier this month on a one-year deal.
With Hellberg set to become an unrestricted free agent this summer, it would make sense for the Red Wings to see what he can do in a game to potentially help inform them on a decision about tendering him a new contract.
At the very least, it would be a shame to see his beautiful equipment go to waste.
The Red Wings enter Friday’s action with a 31–40–10 record this season. With @Jack Hughes, @Tomas Tatar, @Jonathan Bernier, @Nico Hischier, @Miles Wood, @P.K. Subban, and @Jonas Siegenthaler all on the sidelines, the Devils sit at 27–45–9.
New Jersey has lost each of its last five games heading into Friday’s season finale. Detroit most recently fell by a 3–0 score against the Toronto Maple Leafs on April 26.
Either way, one of these two teams will head into the summer on a high note. Maybe the Red Wings will give the Devils some Hell of their own along the way.