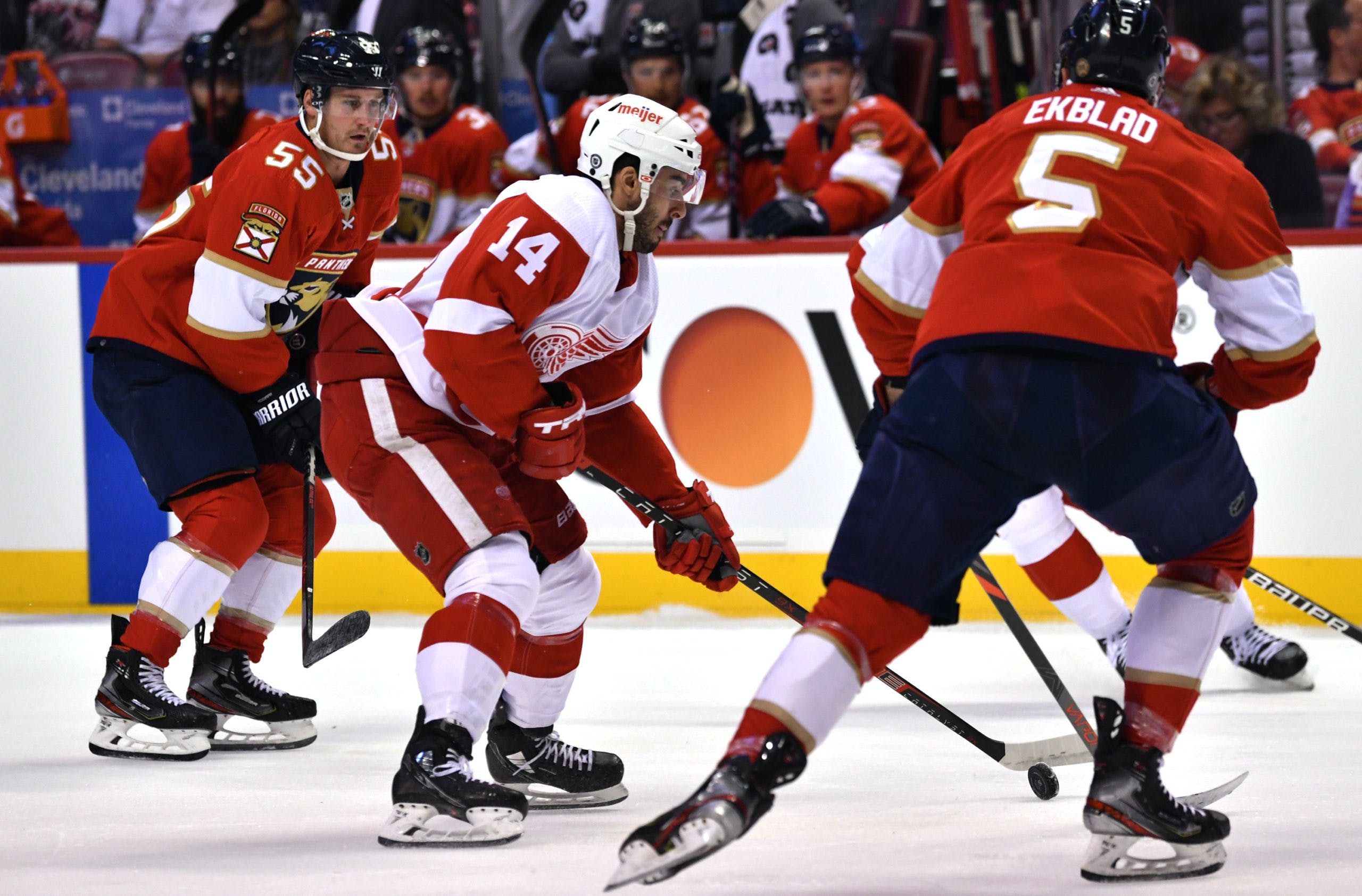 By Mike Gould
9 months ago
The Detroit Red Wings lost in decisive fashion to the Florida Panthers at FLA Live Arena on Saturday night.
Outshot 39–24 in the game, the Red Wings replaced starting goaltender @Thomas Greiss with @Alex Nedeljkovic midway through the second period after Greiss allowed five goals on Florida’s first 23 shots. Detroit ultimately fell to the Panthers by a 6–2 score.
@Mason Marchment opened the scoring for the Panthers at the 4:10 mark of the first period, but Red Wings forward @Robby Fabbri answered right back just over three minutes later to tie the game.
Playing in his 300th National Hockey League contest, Fabbri scored his second goal in as many games to bring the Red Wings level. Danny DeKeyser and @Gustav Lindstrom picked up the helpers on Fabbri’s 16th goal of the 2021–22 campaign.
@Anthony Duclair and @Anton Lundell responded later in the first period to give the Panthers a 3–1 lead.
Lundell’s goal — his first of two in the game — eventually stood as the winning tally in Florida’s 6–2 victory. The rookie center attempted to make a cross-crease pass to Marchment but instead banked the puck off Lindstrom’s stick and past Greiss.
The Panthers added three more goals in the second period to take a commanding 6–1 lead over the Red Wings. @Sam Bennett, @Lucas Carlsson, and Lundell found the back of the net in the middle frame.
Carlsson’s goal was one for his own personal highlight reel. The 24-year-old defenseman broke the puck out of Florida’s zone all by himself before skating it through neutral territory and into Detroit’s end.
After surveying his options, Carlsson unleashed a wrister that beat Greiss low on his glove side. Red Wings head coach Jeff Blashill elected to pull Greiss from the game after he allowed Carlsson’s third goal of the season, which came at the 11:01 mark of the second period.
@Tyler Bertuzzi cut the Panthers’ lead to four goals late in the third period, picking up the puck off a @Joe Veleno faceoff win and firing a wrister past @Sergei Bobrovsky. Bertuzzi is now just six goals shy of the 30-goal plateau.
@Moritz Seider failed to pick up a goal or assist in Saturday’s game, spelling the end of his eight-game point streak (which stands as the longest point streak by a rookie defenseman in Red Wings franchise history).
Nedeljkovic made 15 saves on 16 shots in 28:59 after replacing Greiss. At the other end, Bobrovsky allowed just two goals on 24 shots.
With the victory, the Panthers improved to 37–13–5 on the season and overtook the Tampa Bay Lightning for first place in the Atlantic Division. The Red Wings fell to 24–26–6 after being swept on their two-game Florida road swing.
Little Caesars Arena will be the site of the Red Wings’ next game. They’ll return to action on Mar. 8 to take on the Arizona Coyotes at 7:30 p.m. ET.

WINGS GAME RECAP BROUGHT TO YOU BY DAILY FACEOFF