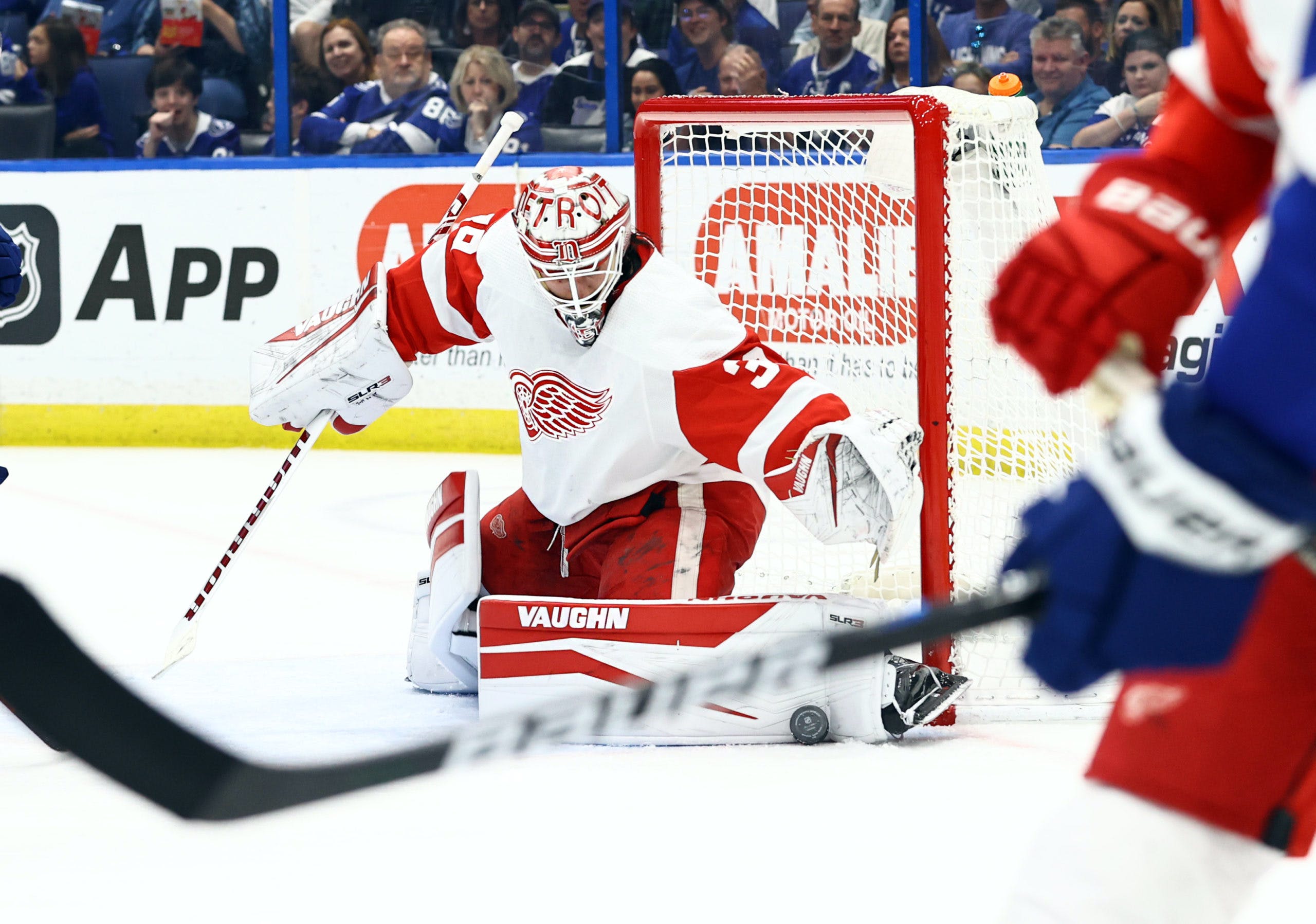 By Mike Gould
9 months ago
@Alex Nedeljkovic played his best game in over a month, but it wasn’t enough to help his Detroit Red Wings avoid a 3–1 loss to the Tampa Bay Lightning on Friday night.
Nedeljkovic had failed to record a save percentage north of .900 in his previous four outings, including two consecutive outings where he allowed a total of 12 goals on just 49 shots. He entered the game in Tampa with his save percentage down to a lackluster .903 through 38 appearances in 2021–22.
The 26-year-old goaltender stopped 35 of the 37 shots he faced at Amalie Arena and helped the Red Wings enter the final 10 minutes of regulation time locked in a 1–1 tie with the two-time defending Stanley Cup champions.
Unfortunately for Nedeljkovic and Co., Bolts defenseman @Mikhail Sergachev was able to give his team a 2–1 lead in the dying seconds of a power play just past the midway mark of the middle frame. @Victor Hedman and @Ross Colton picked up the helpers on Sergachev’s fourth goal of the season.
All three of Tampa’s goals on Friday came with the extra man. Detroit struggled mightily on special teams in the contest, going 0-for-2 on the power play but allowing three goals in the four times they played shorthanded.
@Brayden Point and @Steven Stamkos also scored for Tampa, which improved to 36–12–6 with the victory. Outshot 38–23 in the game, Detroit fell to 24–25–6 on the year. Lightning goaltender @Brian Elliott only had to make 22 saves for his sixth victory of the season.
The Red Wings’ only goal of Friday’s game came off the stick of @Robby Fabbri, albeit with a little help from Elliott. The 36-year-old netminder misplayed a long-range shot from @Moritz Seider, with the puck trickling through him before landing in the crease for Fabbri to deposit.
Seider, 20, extended his personal point-scoring streak to eight games with the primary assist on Fabbri’s goal. He’s one of just four rookie defensemen in National Hockey League history to achieve that feat.
On a related note, Red Wings captain @Dylan Larkin saw his own point streak end at 10 games after Friday’s loss. The 25-year-old center remains atop the team’s scoring leaderboard with 27 goals and 56 points in 50 contests.
@Carter Rowney exited Friday’s game after taking a Hedman shot to his shin. During the third period of the game, the Red Wings announced that Rowney had suffered a lower-body injury and would not return.
The Red Wings will wrap up their two-game Florida road trip with a stop in Sunrise when they take on the Florida Panthers on Saturday. Puck-drop on that one will go exclusively on Hulu at 7:00 p.m. ET.

WINGS GAME RECAP BROUGHT TO YOU BY DAILY FACEOFF