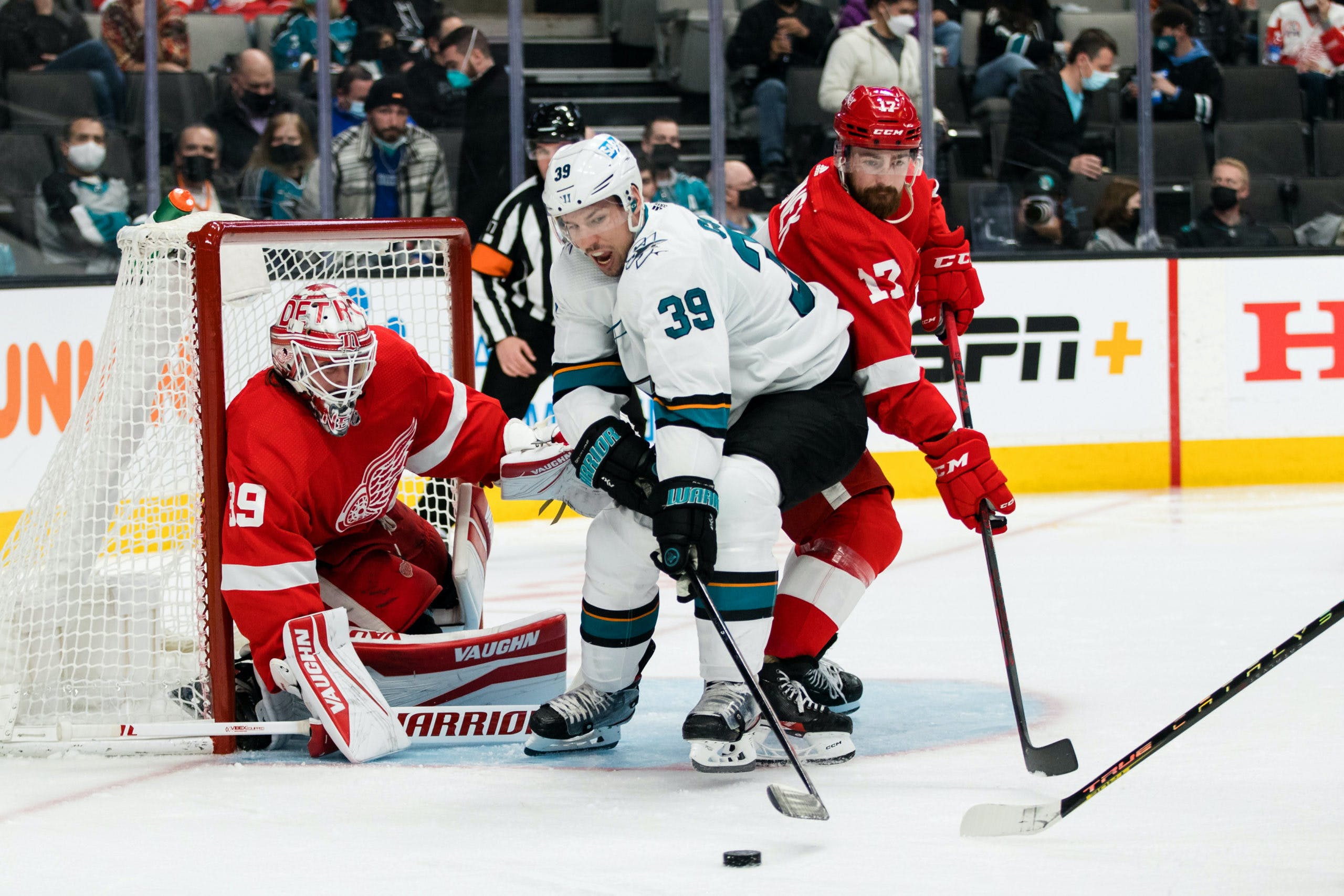 By Mike Gould
10 months ago
At long last, the wait is over for @Nick Leddy.
On the day where the greatest defenseman in Detroit Red Wings history returned to the organization in an executive role, the Red Wings’ biggest defensive acquisition of the 2021 offseason finally scored his first goal with the team.
With the Red Wings and San Jose Sharks tied 1–1 early in the third period of their game on Tuesday, Leddy carried the puck all the way from behind his own net across the Sharks’ blue line before firing a wrister that eluded @Adin Hill.
Leddy, who has endured a very difficult start to his first season with the Red Wings, broke a 45-game goalless drought on the play. The 30-year-old defenseman is set to become an unrestricted free agent in July and could see his potential value at the trade deadline increase with more goals like the one he scored on Tuesday.
@Filip Hronek and @Tyler Bertuzzi assisted on Leddy’s first goal of the 2021–22 season, which gave the Red Wings a 2–1 lead at the 1:48 mark of the final frame. (@Jeffrey Viel ultimately tied the game just 90 seconds later).
Leddy’s goal was technically Detroit’s second in just 2:10 of game time, although the Red Wings’ first goal came near the end of the second period. With the entire second intermission lodged between the two goals, that 2:10 difference was more like half an hour.
After @Timo Meier gave the Sharks a 1–0 lead late in the first period, San Jose did everything in its power to extend the lead in the middle frame. Red Wings goaltender @Alex Nedeljkovic faced 14 shots in the period before his team went on a two-man advantage late in the second, with the Sharks still ahead by only one goal.
Nedeljkovic’s teammates rewarded him for his outstanding play by tying the game on that extended power-play opportunity. Bertuzzi managed to score his team-leading 17th goal of the season — and his eighth in as many games — by deflecting a Hronek pass over Hill’s blocker.
@Moritz Seider picked up the secondary assist on Bertuzzi’s equalizer.
Nedeljkovic ultimately stopped 37 of 40 shots in Tuesday’s game, although he allowed a goal on the only one he faced in overtime. He was named the game’s second star for his efforts.
Sharks captain @Logan Couture managed to seal a 3–2 victory for his team with a greasy goal off a scramble in the crease, sending the Red Wings back home from California with zero wins and two points in three games.
Red Wings captain @Dylan Larkin missed Tuesday’s game with an upper-body injury but has not been ruled out for Thursday’s game against the Winnipeg Jets. He still leads Detroit with 32 points in 32 games this season.
With the loss, the Red Wings fell to 16–16–5 on the season and remained at a .500 points percentage. Their next opponent, Winnipeg, currently ranks fifth in the Central Division with a 16–12–5 record and 37 points in 33 contests.
Uncategorized
Recent articles from Mike Gould