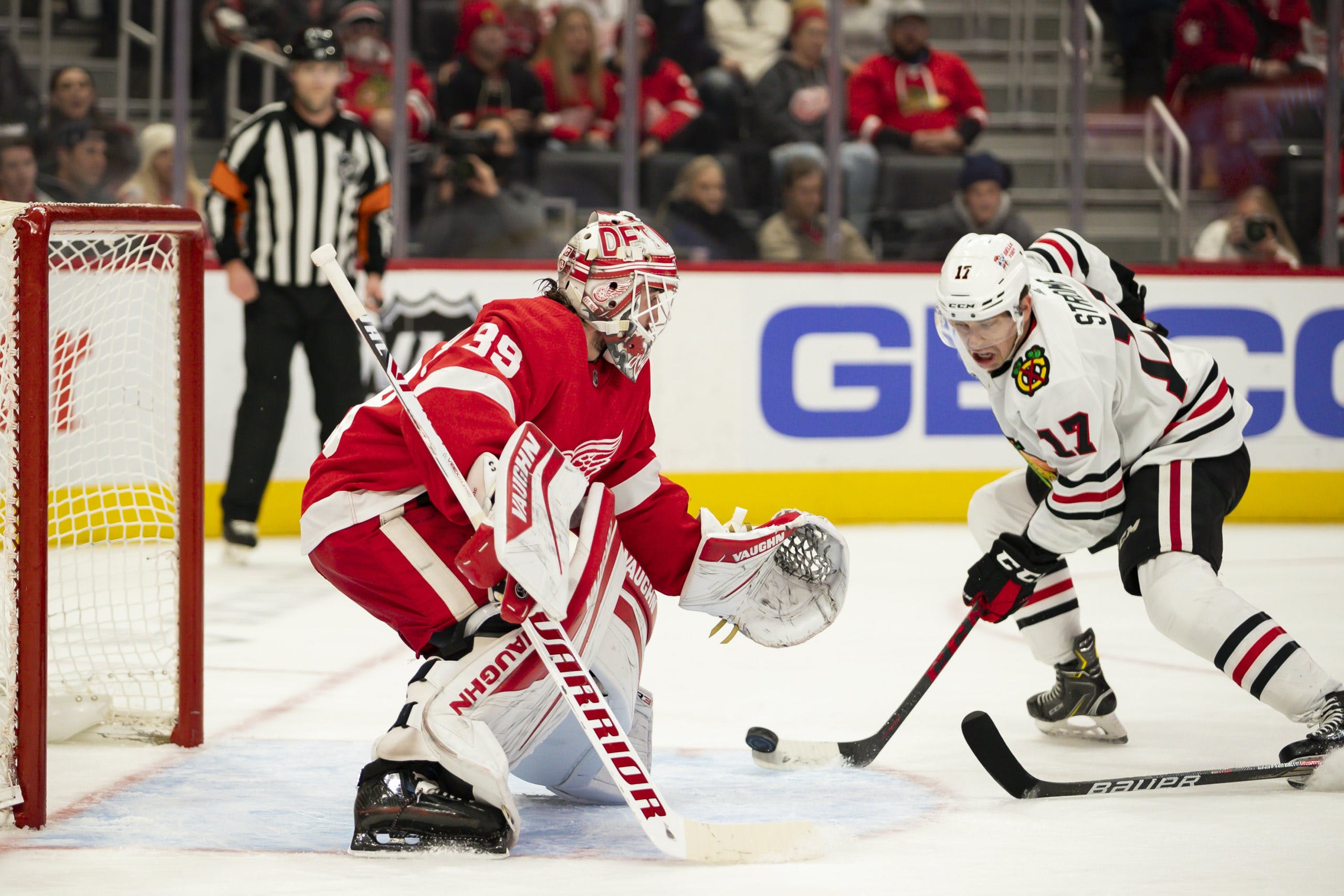 By Mike Gould
10 months ago
Detroit Red Wings goaltender @Alex Nedeljkovic was pulled for just the second time this season in his team’s 8–5 loss to Chicago on Wednesday.
Nedeljkovic, 26, allowed four goals on 16 shots in the first period as the Red Wings fell behind 4–0 against the Hawks. Backup goaltender @Calvin Pickard replaced Nedeljkovic for the final two periods and stopped 18 of 21 shots the rest of the way.
Chicago forward @Dylan Strome recorded the first hat trick of his National Hockey League career in the victory. The 24-year-old center scored two of the Hawks’ four unanswered goals in the opening frame.
@Alex DeBrincat scored twice for the Hawks, with @Dominik Kubalik, @Sam Lafferty, and @Brandon Hagel each recording a single goal.
The Red Wings responded to Chicago’s offensive outburst in the first period with three consecutive goals from the “Guelph Connection” line (@Robby Fabbri, @Tyler Bertuzzi, and former Hawk @Pius Suter) in the middle frame. Bertuzzi’s marker was his 20th of the 2021–22 season; Suter’s goal was his first against his old team.
Strome and DeBrincat scored back-to-back goals early in the third period to put Chicago up 6–3, but the Red Wings quickly responded to keep the game close.
@Moritz Seider and @Dylan Larkin tallied 3:20 apart just past the midway mark of the final frame to bring the Wings back to within a goal.
With his marker, Larkin became the second Red Wing to score 20 goals in 2021–22 (joining Bertuzzi, who reached the plateau one period earlier). The captain has only bested 20 goals in a season on two previous occasions, scoring 23 in 80 games as a rookie in 2015–16 before netting 32 in 76 during the 2018–19 campaign.
With 20 goals through his first 38 games, and with only 39 left to play, Larkin is on pace for a career-high 41 goals this year.
Hagel restored Chicago’s two-goal lead just 48 seconds after Larkin’s tally. DeBrincat sealed the deal with an empty-netter at the 18:17 mark of the third period.
The Hawks outshot Detroit 38 to 33 in Wednesday’s contest. The Wings will return to action when they visit the Pittsburgh Penguins on Friday at 7:00 p.m. ET.
Uncategorized
Recent articles from Mike Gould