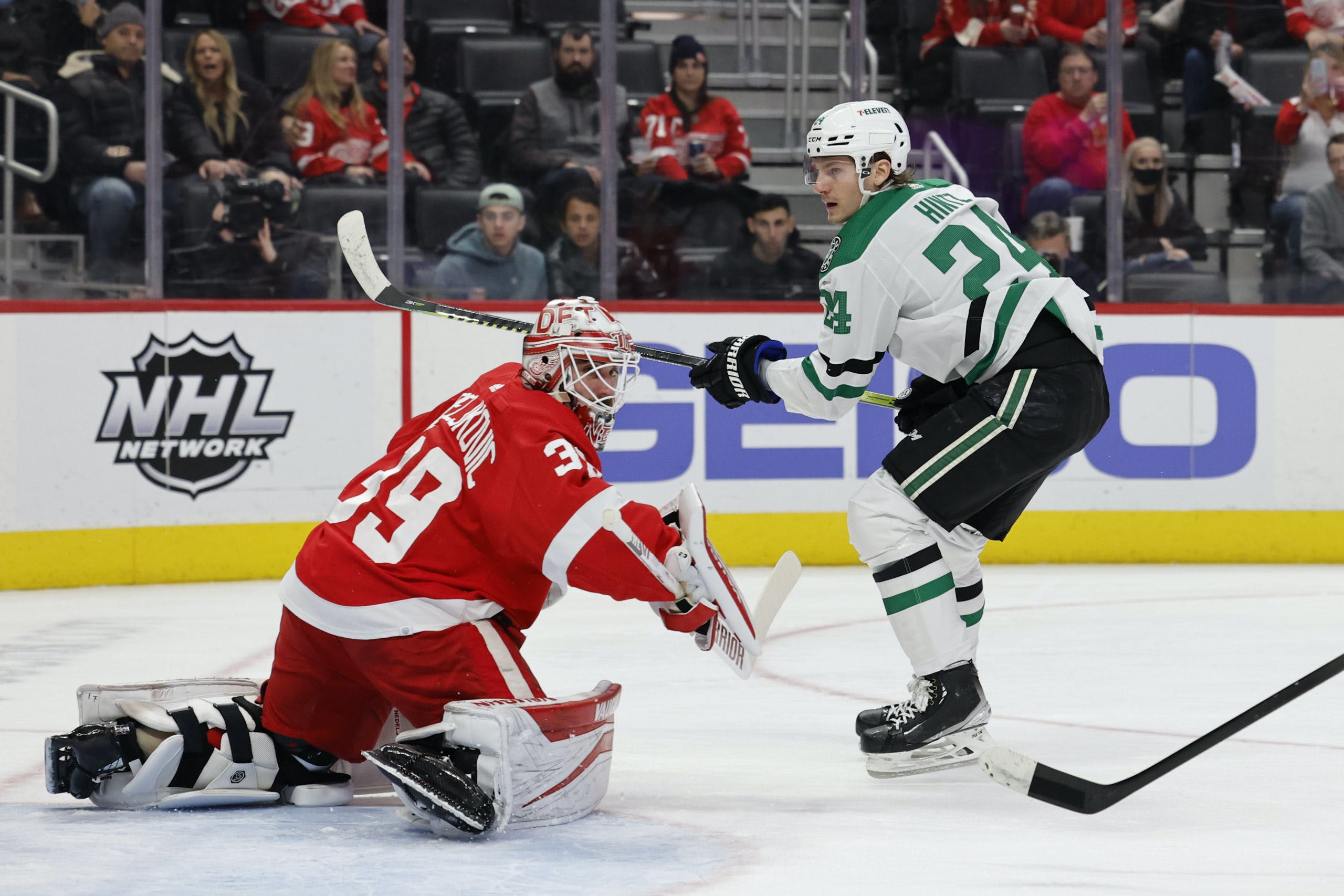 By Mike Gould
10 months ago
Detroit Red Wings captain @Dylan Larkin scored what will go down as one of the goals of the 2021–22 NHL season in his team’s 5–4 overtime loss to the Dallas Stars on Friday.
As he barreled into the offensive zone, Larkin flat-out embarrassed Stars defenseman @John Klingberg with a slick deke before firing a quick wrister that bounced high off goaltender @Braden Holtby and over the goal line.
Larkin’s unassisted goal gave the Red Wings their first of two one-goal leads in Friday’s game. Detroit failed to score a single insurance goal, however, and ultimately fell 5–4 in overtime. Stars forward @Jason Robertson tied the game with 1:03 remaining in regulation before @Roope Hintz netted the winner 2:51 into the extra frame.
Red Wings goaltender @Alex Nedeljkovic had an uncharacteristically shaky outing on Friday, allowing five goals on 32 shots for his fifth overtime loss of the season.
Nedeljkovic, who’s now 12–10–5 with a .916 save percentage in 29 games with Detroit, gave up multiple stinkers against the Stars. @Ryan Suter beat him from an awful angle to open the scoring in the first period; near the end of the second, fellow Stars defenseman @Esa Lindell scored from nearly the exact same spot to tie the game at 3–3.
Yikes.
On a more positive note, the Red Wings’ “Guelph Connection” line had an excellent outing on Friday.
Detroit’s second unit — made up of 2014–15 Guelph Storm teammates @Pius Suter, @Tyler Bertuzzi, and @Robby Fabbri — combined for the team’s first two goals and wound up with a 74.27 on-ice expected goals percentage at five-on-five (according to Natural Stat Trick).
Larkin wasn’t the only Red Wing to score a highlight-reel goal on Friday. The “Guelph Connection,” er, connected less than a minute after Dallas’ Suter opened the scoring, with Fabbri deftly receiving a Bertuzzi pass with his right skate before undressing Holtby with a beautiful move for his 11th goal of the season.
All three members of the “Guelph Connection” scored in Friday’s game, with Bertuzzi’s marker coming on a power play to give the Red Wings a short-lived 4–3 lead in the third period.
Dallas has officially won its 2021–22 season series against the Red Wings. The Stars previously beat Detroit in Dallas by a 5–2 score on Nov. 11, 2021.
Friday’s game also served as an opportunity for the Red Wings to welcome @Luke Glendening back to Detroit. The 32-year-old forward signed a two-year deal with the Stars last July after spending the first eight seasons of his NHL career with the Red Wings.
The Red Wings won’t have to wait long to return to action. They’ll be in Nashville on Saturday evening to take on the Predators at 8:30 p.m. ET. You’ll be able to catch that game on Bally Sports Detroit and on WXYT-FM 97.1 “The Ticket.”

RED WINGS GAME RECAP BROUGHT TO YOU BY DAILYFACEOFF