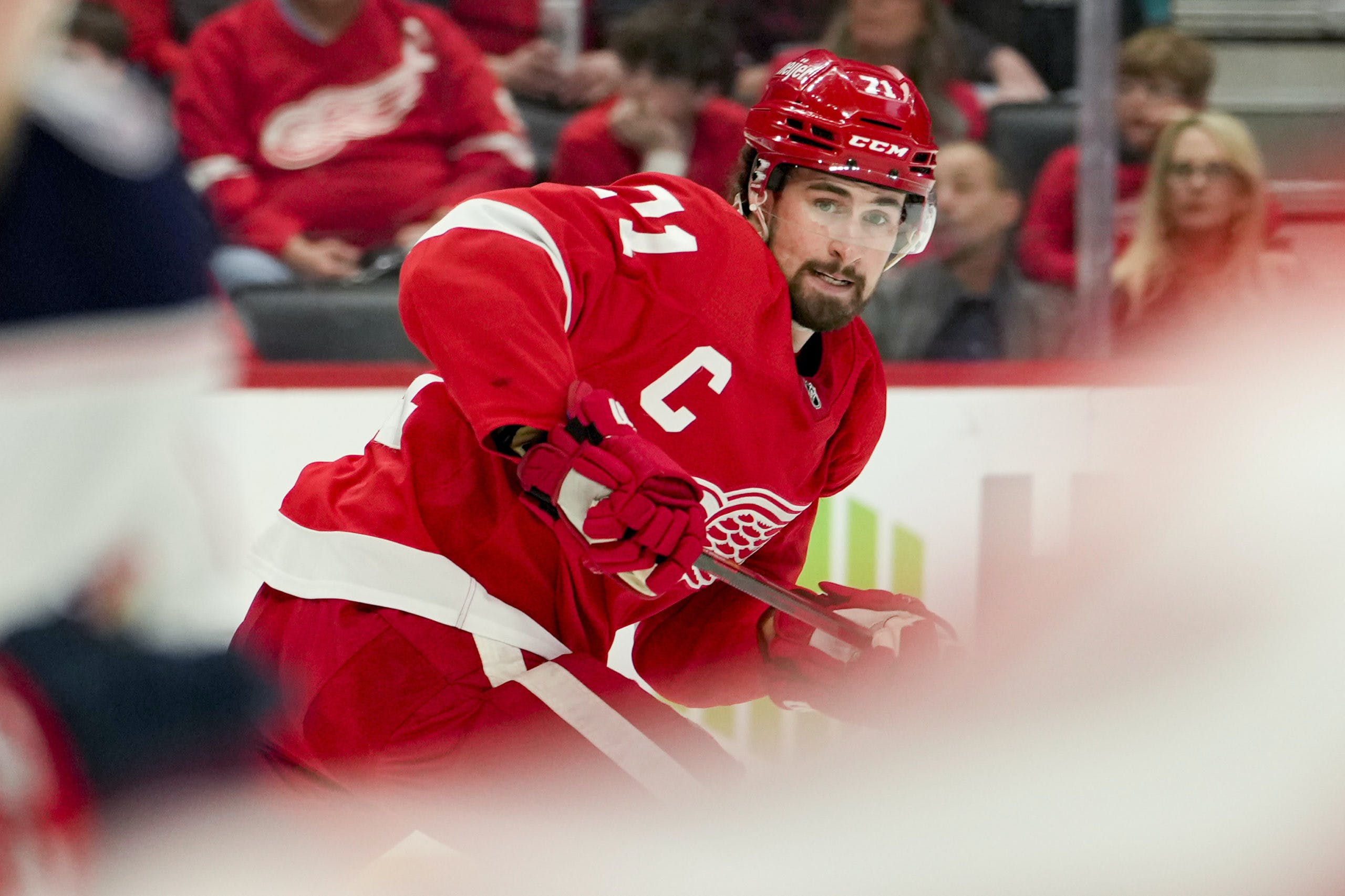 By Mike Gould
7 months ago
Detroit Red Wings captain @Dylan Larkin will look to get his team back on track — and potentially reach the 70-point plateau — when the Eastern Conference-leading Florida Panthers visit Little Caesars Arena on Sunday afternoon.
Larkin, 25, fired a pair of shots but was a team-worst minus-three in the Red Wings’ 4–0 defeat at the hands of the New York Rangers on Saturday. Detroit has now suffered through seven shutout losses this season.
“We defended a lot, so, when we got the puck, we were tired,” Larkin told reporters after the loss. “We were just chipping it in and trying to get a change. It’s hard to generate offense, it’s hard to build momentum playing like that.”
The Rangers are heading to the playoffs on the strength of their excellent 49–21–6 record. They have one of the best goaltenders in the world and some legitimate superstars on defense and at forward, including @Adam Fox and @Artemi Panarin.
Detroit’s next opponent is even stronger. The Florida Panthers (53–15–6) are one of only two NHL teams with more than 50 wins this season. They have 10 players with more than 40 points and a two-time Vezina Trophy winner in goal.
The Panthers have won nine games in a row and are a perfect 2–0–0 against the Red Wings this season. Even without @Aaron Ekblad, Florida has three excellent defense pairings; @Sergei Bobrovsky has an eye-popping 36–6–3 record to go along with a .911 save percentage.
Exactly one member of the Red Wings has recorded at least one point in both of the team’s previous meetings against the Panthers this season. Unfortunately for Detroit, that player — @Robby Fabbri — is done for the year with a knee injury. Larkin has yet to score a point against Florida this season, although he does have 12 shots in two games against the Panthers.
Remember how the Panthers have 10 40-point scorers this season? The Red Wings have only four, with @Filip Hronek the only other player in striking distance. Larkin leads the team with 69 points (31 goals, 38 assists) and will likely wind up surpassing 70 for the second time in his career.
Larkin previously amassed 73 points (32 goals, 41 assists) in 76 games with the Red Wings in 2018–19. The 2014 first-round pick needs just one more goal and four more points to match his career-best marks in those respective categories; the Red Wings have seven games left to play this season.
Things aren’t going to get much easier for Detroit in the final two weeks of the 2021–22 campaign. While they will play against the New Jersey Devils (26–42–7) twice, the Red Wings also have two dates against the Panthers on the docket and will also face the playoff-bound Pittsburgh Penguins, Tampa Bay Lightning, and Toronto Maple Leafs.
There might be some more lopsided games still to come for the Red Wings, but fans of the team can still look forward to potentially seeing Larkin reach new heights as he continues his excellent career. The Waterford, MI product has one year remaining after this one on his $6.1 million-AAV contract.
Larkin and the Red Wings will drop the puck against the Panthers at 1:00 p.m. ET on Sunday. You’ll be able to watch the game at Little Caesars Arena or on ESPN.