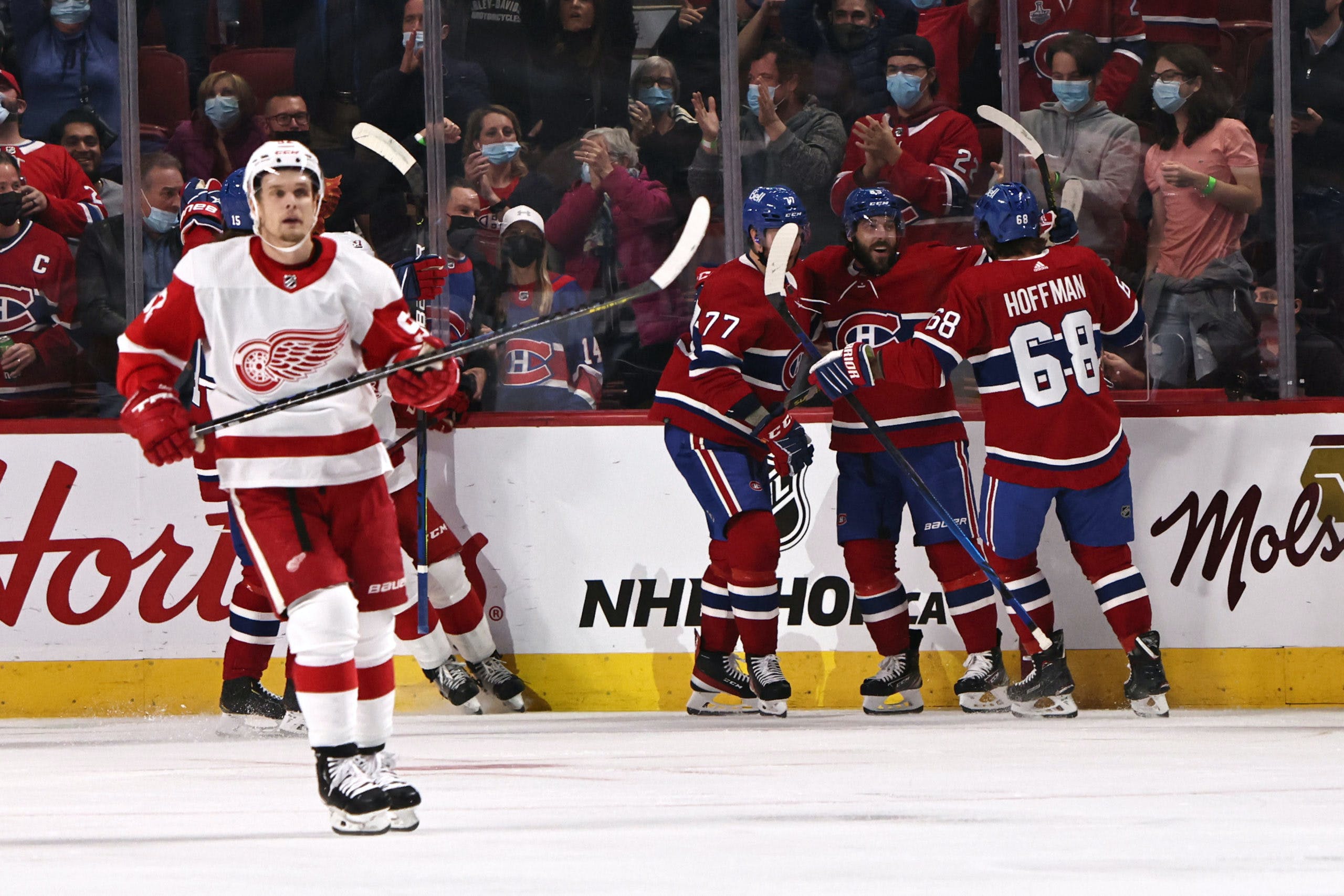 By Mike Gould
1 year ago
Talk about embarrassing.
The Detroit Red Wings lost to the Montreal Canadiens on Saturday by a stunning 6-1 score. The Habs entered the game with a dismal 0-5-0 record but it sure didn’t look it as they scored six unanswered goals to seal their first win of the season.
@Dylan Larkin scored the Wings’ only goal in the game. @Thomas Greiss had a disastrous night in goal for Detroit, allowing five goals on 17 shots before being pulled for @Alex Nedeljkovic halfway through the second period.
@Mathieu Perreault scored a natural hat trick for Montreal, with @Ben Chiarot, @Mike Hoffman, and @Christian Dvorak also tallying for the Canadiens. @Jake Allen stopped 26 of the 27 shots he faced in the win.

With the way Detroit started the game, you’d be forgiven for thinking they were about to hand Montreal a sixth loss.
The Red Wings controlled 55.63% of the 5-on-5 expected goals in the first period, according to Natural Stat Trick. They also scored the first goal, with team captain @Dylan Larkin wristing home a beauty on the power play to give his team a 1-0 lead just 5:25 into regulation.
It was all Montreal from there. Chiarot tied the game for the Habs at the 14:10 mark of the first; just 2:05 later, Hoffman scored his first goal as a Canadien to give his team the lead.
The Canadiens utterly dominated the second period, controlling 67.96% of the 5-on-5 expected goals and exiting the frame with a 5-1 lead. Dvorak got things going early for the Habs, making it 3-1 just 3:17 into the period.
Perreault followed that up with his first two goals in a Montreal sweater, which came just 2:14 apart and resulted in the Wings replacing Greiss with @Alex Nedeljkovic with more than half the game remaining.
Nedeljkovic was perfect in relief, although the Wings ultimately conceded one more goal when head coach Jeff Blashill decided to pull his goalie for an extra attacker with more than seven minutes remaining in regulation.
With Nedeljkovic’s crease vacated and Detroit still down by four goals, a certain Canadiens hometown hero jumped on the ice aiming to cap off a big night. Perreault scored his third goal of the game with 6:44 remaining in regulation to seal a 6-1 Canadiens win.

Montreal certainly carried the play on Saturday but not to the extent where Greiss’ goaltending performance was excusable. The Red Wings had the second-best starting goaltender in the game and it wasn’t particularly close.
The Wings were also without their leading scorer, @Tyler Bertuzzi. He was ineligible to travel to Canada for Saturday’s game because of his choice not to get vaccinated against COVID-19.
Here’s the shot heatmap from Saturday’s game, as posted by Natural Stat Trick: 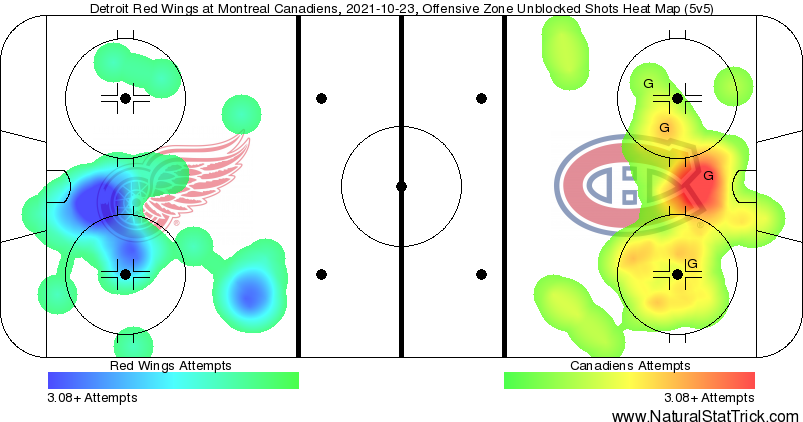 We’ll go with @Dylan Larkin, who scored Detroit’s only goal and led the team with 0.31 individual expected goals at 5-on-5. With Larkin on the ice, the Red Wings controlled 65.06% of the expected goals and were generally dominant (even without Bertuzzi).
Maybe a few more of those expected goals turn into real goals if Larkin had more help on Saturday.

The Red Wings will waste no time getting back into action. They’ll be back in America on Sunday — picking up @Tyler Bertuzzi along to way — to face Chicago at the United Center. Puck-drop will go just after 7:00 p.m. ET on Bally Sports Detroit.
Uncategorized
Recent articles from Mike Gould