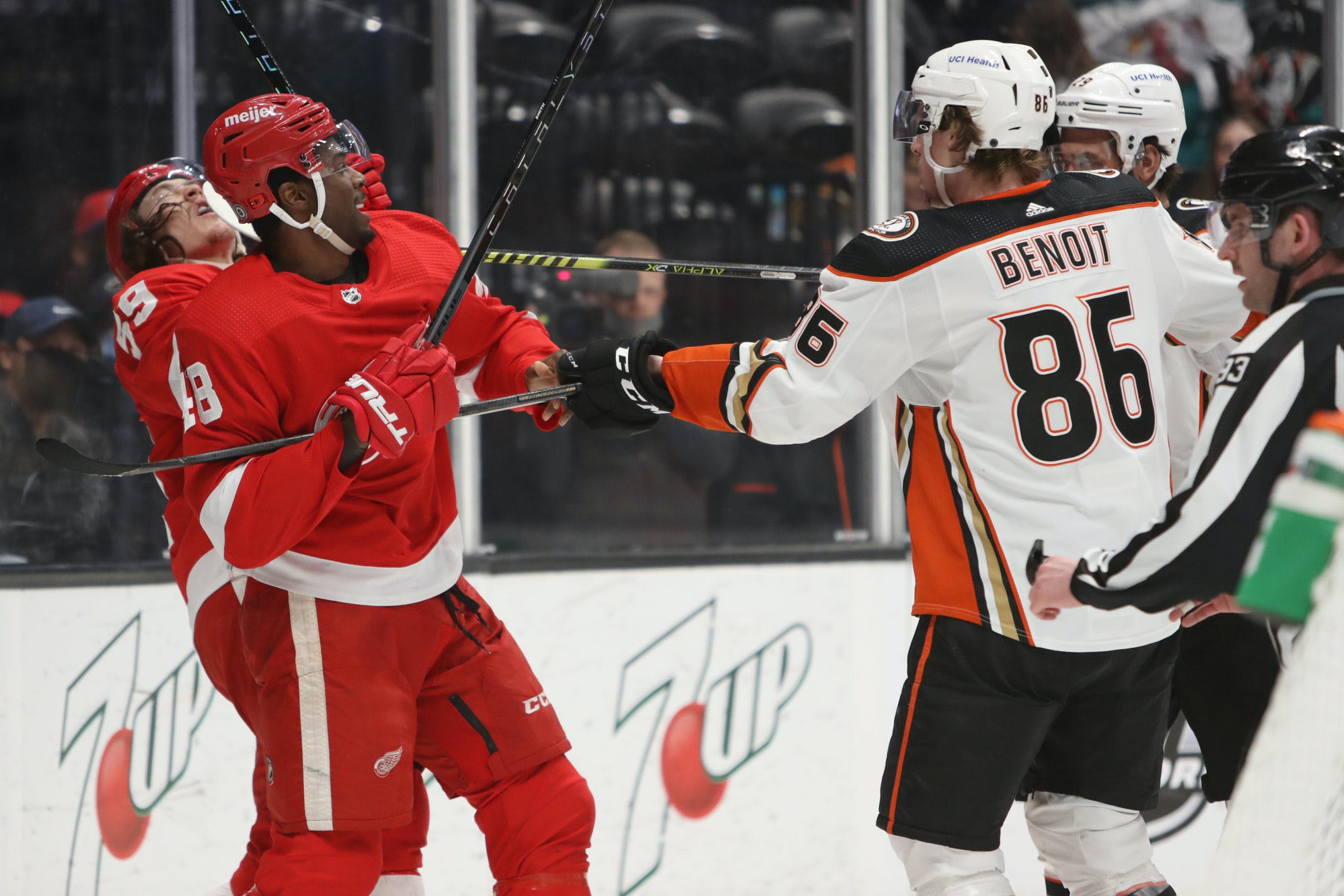 By Mike Gould
10 months ago
@Tyler Bertuzzi’s seventh multi-point game of the 2021–22 season wasn’t enough to prevent the Detroit Red Wings from losing in a shootout against the Anaheim Ducks on Monday.
Bertuzzi recorded a goal and an assist during the second period of Monday’s game, with his 16th tally of the season giving the Red Wings a 2–1 lead at the 15:07 mark of the middle frame.
Detroit’s lead was short-lived. @Troy Terry (who else?) tied the game late in the period with his 22nd goal of the season before @Maxime Comtois scored his first goal of the season to put the Ducks ahead 3–2 just 2:01 into the final frame.
@Vladislav Namestnikov managed to bring the game back even with a nifty deflection midway through the third period. The 29-year-old Russian became the fourth Red Wing to reach double digits in goals this season, joining Bertuzzi, @Dylan Larkin, and @Lucas Raymond in the club.
Ducks rookie and Calder Trophy contender @Trevor Zegras opened the scoring in Monday’s game at the 6:32 mark of the first period. The Red Wings had to wait all the way until the opening minute of the second to respond, with Bertuzzi and @Moritz Seider — one of Zegras’ Calder counterparts — setting up @Filip Hronek for the equalizer.
Bertuzzi’s goal came nearly 15 minutes after Hronek’s fourth of the season. The 26-year-old winger managed to one-time a wraparound pass by @Marc Staal past Ducks goaltender @Lukas Dostal — making his NHL debut — for his seventh goal in his last seven games.
Raymond — yet another Calder candidate — recorded the secondary assist on Bertuzzi’s goal, passing franchise icon and current general manager Steve Yzerman to become the fastest teenager to hit 20 career assists in the history of the Red Wings franchise.
After Namestnikov’s game-tying goal, the score remained tied through the end of regulation time. Overtime proved fruitless, resulting in a shootout. Detroit outshot Anaheim 36–27 through 65 minutes.
The Red Wings opted to use Raymond and @Adam Erne in the skills competition, but Dostal managed to stop both. Detroit goaltender @Thomas Greiss stopped Terry but allowed consecutive goals to Zegras and @Rickard Rakell to seal the shootout victory for Anaheim.
In addition to the lost point in the standings, the Red Wings lost their captain during Sunday’s game. @Dylan Larkin left with an upper-body injury and did not return shortly after taking two very brief shifts early in the second period.
It remains to be seen whether Larkin will be in the lineup when the Red Wings return to action for their game against the San Jose Sharks on Jan. 11. Detroit last faced San Jose on Jan. 4, winning 6–2 at Little Caesars Arena largely due to Bertuzzi and @Pius Suter both scoring a pair of goals.
Uncategorized
Recent articles from Mike Gould