Third round sleepers for the Detroit Red Wings 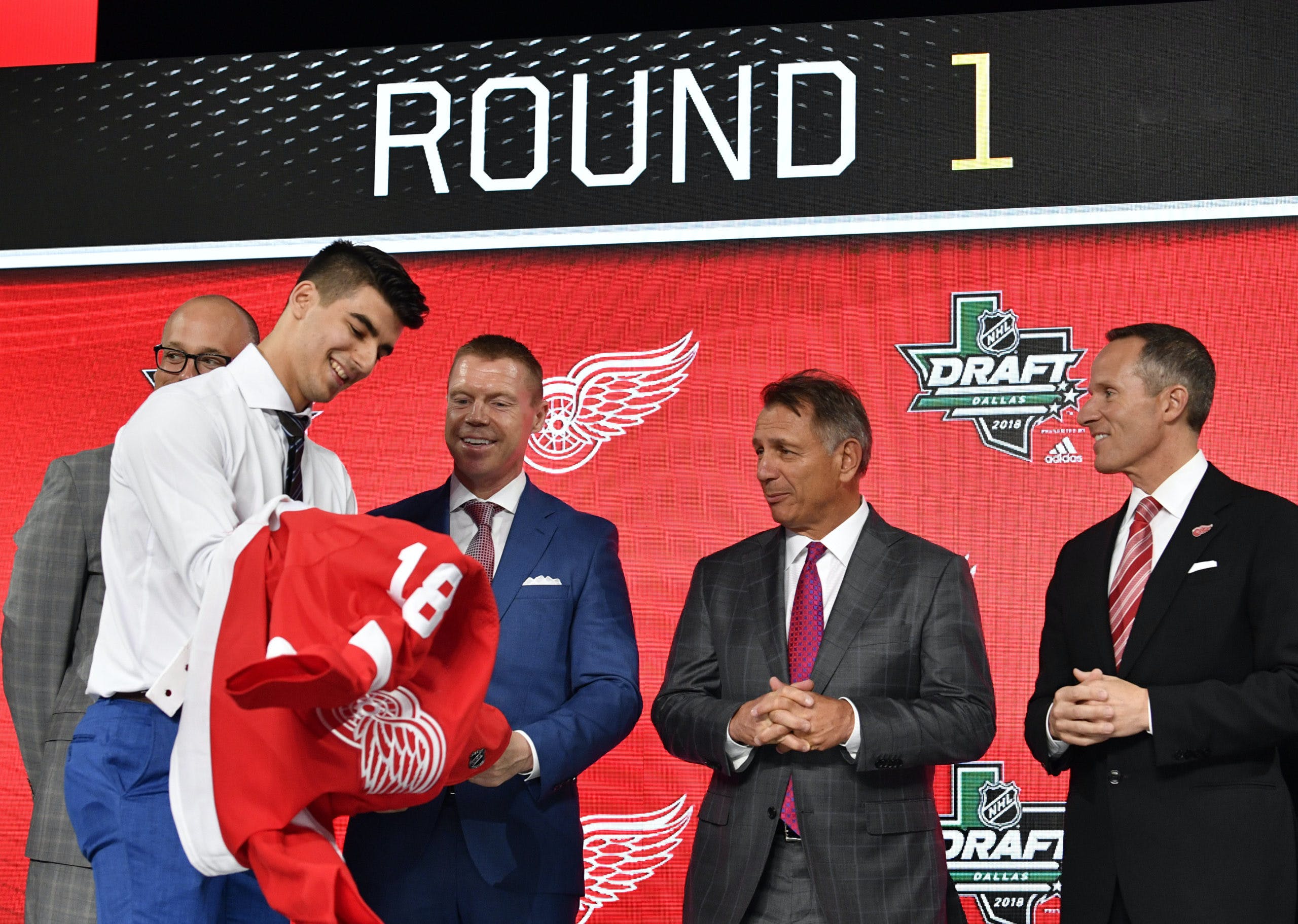 By Nation World HQ
1 year ago
By Austin Broad
FCHockey Contributor
There will be more misses than hits at the 2021 NHL Draft. History has shown this.
It’s a law of diminishing returns, too.
The later in the draft you get, the longer the odds that your pick-turned-prospect will blossom into an NHL player, much less an NHL star.
And whether you feel the 2021 NHL Draft class is lacking in punch, power, or prestige, it isn’t without its intrigue.
Undoubtedly, most prospects will fizzle. It’s the nature of the game. But some will hit, blossoming into an NHL player that’ll leave fans and organizations alike wondering what one team saw that 31 others didn’t. Many of those will come beyond the first round.
With that, here are five targets from the class that could hit, and your team should consider selecting in the third round of the 2021 NHL Draft:

Danila Klimovich is a dazzling forward who possesses elite puck skills and thrives in one-on-one situations. He uses his skating and puck skills to attack on the rush. He’s not afraid to showcase his puckhandling skills either, as he’s a confident player who can make defenders miss easily.
Klimovich scored a lot in Belarus this past season, rocketing up the draft rankings. His performance with Belarus at the 2021 IIHF World Under-18 Championship really helped cement his status as a potential early round draft pick. After scoring 28 goals in 37 games in Belarus Vysshaya, he scored six goals in five games at the Under-18s.
“Klimovich is very much a shoot-first player whose playmaking arsenal is somewhat basic at the moment, but his ability to get power behind both his wrist shot and one-timers makes him a threat to score from nearly everywhere in the offensive zone,” FCHockey scout Brandon Holmes said. “At the U18 World Championships I saw a much more engaged player who brought his best in every game, which is what Klimovich will need to be in order to succeed at the next level.”
RELATED: CHECK OUT FCHOCKEY’S FULL 300-PLAYER RANKING FOR 2021

Ville Koivunen is a smart, skilled player who does everything a team would want in the offensive zone. He can play a skilled game, using his skating and puck skills to generate offense, but also has a feistiness that allows him to be effective in puck battle situations. Koivunen was great playing in U20 SM-sarja for Karpat U20, scoring 23 goals and adding 26 assists in 38 games. He also put up 10 points (four goals, six assists) in seven games for Finland at the Under-18s.
With his offensive upside and feistiness, Koivunen would be a perfect gamble for any team in the third round of the draft. He has the potential to be a top-six forward, but has a safe floor as an energy player as well.
“Koivunen is a creative forward with the puck who is aggressively trying to make a play regardless of how challenging it may be,” FCHockey scout Curtis Schwartzkopf said. “He has some goal scorer instincts with his positioning in front of the net and an accurate shot that gives goalies fits in the high slot.”
RELATED: BUILD YOUR OWN CUSTOM MOCK DRAFT AT FCHOCKEY

Zack Ostapchuk is a big-bodied forward who can play both a physical game and a finesse game. His ability to control the puck in tight spaces and make flashy plays is extremely rare to see in someone with that is 6-foot-3 and 187 pounds. Ostapchuk can do everything. He has the offensive traits that allow him to produce for his team and the strength and size to play a typical power game. He uses his size and skating ability to get open around the net and has the skill to create chances for himself.
Ostapchuk, who had 16 points (seven goals, nine assists) in 22 games with the Giants last season, has the physical traits and his high-end offensive skill to outperform his draft stock.
“When he’s around the net, he is always dangerous too because his hand speed is terrific and he’s able to tip and redirect shots or passes coming through,” FCHockey scout Joel Henderson said. “I’d just like to say that among WHL forwards long-term, I think Ostapchuk has about as high of potential as anyone.”
RELATED: SEARCH FCHOCKEY’S DATABASE FOR YOUR FAVORITE ELIGIBLES

Sean Tschigerl is the type of player that possesses so many strengths in his game. He’s a well-rounded player who, while not be elite in any one area, does so many different things well it’s difficult to find a weakness. Tschigerl, who had 21 points (13 goals and eight assists) in 21 games with Calgary this season, is a strong skater who uses his mobility on offense and defense, and has a skillset that makes him effective at both ends of the ice.
With that, Tschigerl has a lot of hype around him heading into the draft. He is player that seems like a lock for a bottom-six NHL role with some untapped offensive potential.
“There are so many players in the WHL who wish they had the ability to accelerate and change direction with the mobility that Tschigerl has,” Henderson said. “I very much think he’s capable of adding more finesse style changes of pace to his arsenal since he’s shown high-end power puck control with speed already, but it’s something Tschigerl currently doesn’t use very often at all.
RELATED: UNLOCK FCHOCKEY’S FULL SCOUTING DATABASE

A strong skater with offensive upside, Ethan Cardwell spent his draft season on loan to Sweden’s HockeyEttan playing with Surahammars IF. He is capable of driving transition, using his skating ability to push the defense back into their own zone and generate offense off the rush. It was evident in Sweden, as the 19-year-old draft overager was dominant in recording 27 points (nine goals, 18 assists) in 18 games.
If Cardwell can reign in his aggressive mindset just a little bit, he will be an effective player at the next level.
“A thorn in the side of defenders, Cardwell is an aggressive forechecker who plays well through transition and owns an underrated shot,” FCHockey scout Dylan Galloway said. “He does an incredible job of forcing defenders to make a decision deep in their zone, which creates a ton of havoc and mistakes to capitalize on. The main thing Cardwell will need to fix is that he needs to know when to attack and when to sit back.”
Austin Broad is a scout and contributor at FCHockey.
Nation Network readers can get 25% off FCHockey’s 2021 NHL Draft Guide with promo code NATIONNETWORK. Unlock your savings at checkout!
Uncategorized
Recent articles from Nation World HQ