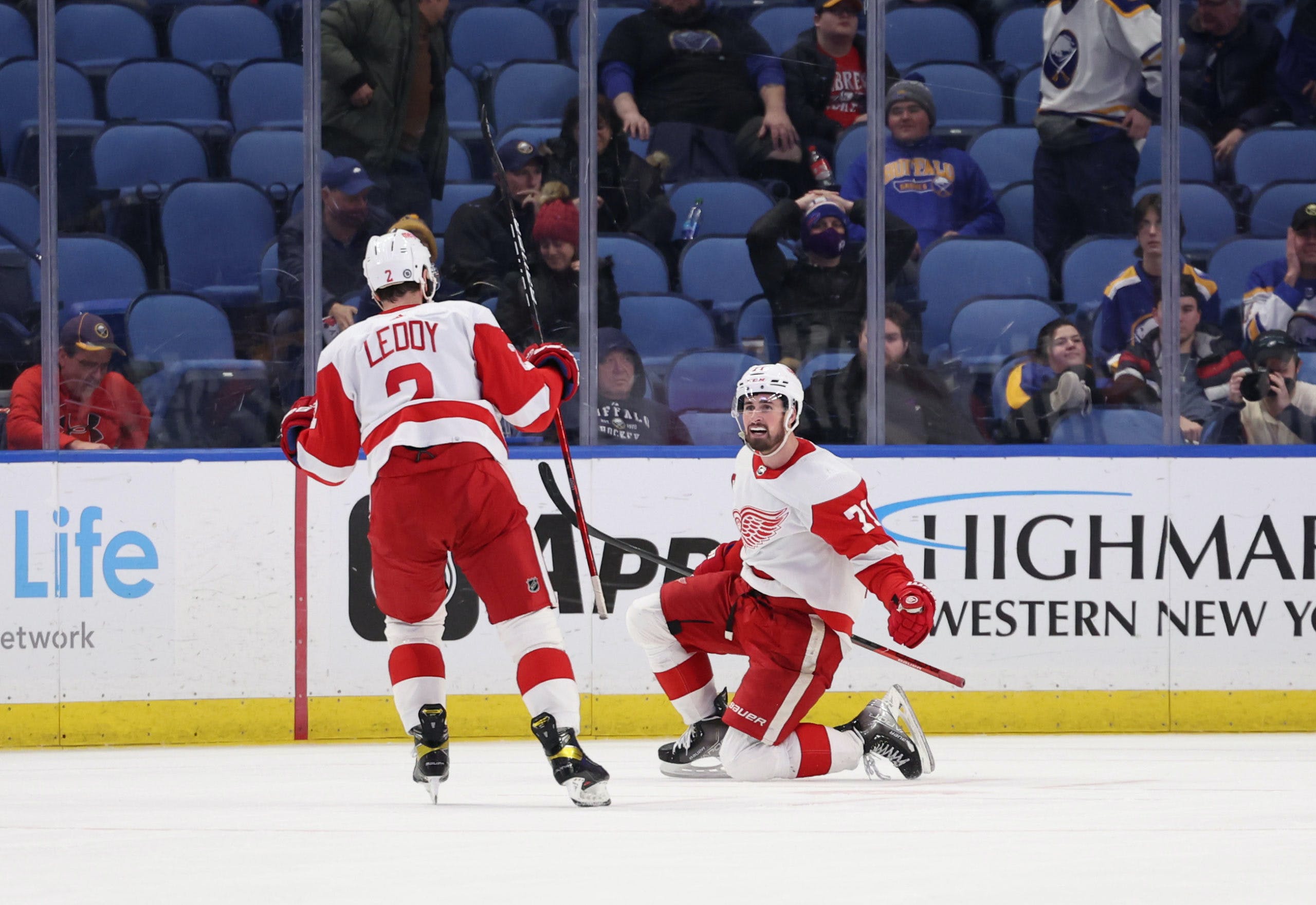 By Mike Gould
10 months ago
Hot take: @Dylan Larkin is really good.
After the Detroit Red Wings went down 2–0 to the Buffalo Sabres midway through the third period of Monday’s game, Larkin scored the final two of his team’s three unanswered goals to propel the Wings to a 3–2 overtime victory.
@Vladislav Namestnikov got the Red Wings on the board at the 10:21 mark of the third period, with @Moritz Seider and @Tyler Bertuzzi picking up the assists. Just over three minutes later, Larkin netted his first of the game to tie things up at 2–2.
Finally, at the 2:07 mark of the overtime period, Larkin sealed the deal. He first forced a turnover in the Sabres’ defensive zone before capitalizing off a give-and-go play with Red Wings defenseman @Nick Leddy, taking a return pass and immediately firing a hard wrister past Sabres goaltender @Aaron Dell.
The Red Wings improved to 18–17–5 on the season with the win, although they remain distantly behind both the Boston Bruins and Pittsburgh Penguins for an Eastern Conference wild-card playoff spot.
After Monday’s performance, Larkin sits in a tie for the Red Wings team lead in goal-scoring. The captain now has 18 goals in 35 games this season; Bertuzzi has the same number of goals in three fewer contests.
With the win, the Red Wings have officially swept their 2021–22 season series against the Sabres. Here are the results of Detroit’s four games against Buffalo this year:
If you’ll recall, @Moritz Seider’s first NHL goal was also the overtime winner in Detroit’s victory over Buffalo on Nov. 6. Fellow rookie @Lucas Raymond scored the OT clincher on Nov. 27.
Larkin was named the first star of Monday’s game. @Alex Nedeljkovic stopped 26 of 28 in the win, improving to 12–10–4 on the season.
The Red Wings will return to action on Jan. 21 when they host the Dallas Stars at Little Caesars Arena.
Uncategorized
Recent articles from Mike Gould