By Mike Gould
1 year ago
Despite largely holding their opponents at bay in the final two periods of play on Thursday evening, the Detroit Red Wings fell to the Calgary Flames by a 3-0 score at Little Caesars Arena.
The Flames mustered just 0.53 expected goals at 5-on-5 in the final 40 minutes but managed to hold onto the 2-0 lead they built in the opening frame. Jacob Markström was excellent for Calgary, making 33 saves for his first shutout of the season.
@Alex Nedeljkovic stopped 26 of 28 shots at the other end. On most nights, that probably would’ve been good enough to at least get his team one point (if not two).
Unfortunately for Detroit, the Flames scored first and locked things down in the third period after a wide-open second. @Elias Lindholm, @Andrew Mangiapane, and @Matthew Tkachuk scored for Calgary.

Forget an opening goal — Thursday’s Detroit/Calgary game had an opening fight.
Flames heavyweight @Milan Lucic took on Wings upstart @Givani Smith just 2:34 seconds into the first period. Props to Smith for taking on one of the league’s toughest players, even if he didn’t fare all that well in the bout.
The Flames struck first just past the mid-way mark of the first period after a lengthy stretch of carrying the play in Detroit’s end.
@Johnny Gaudreau picked up the puck behind @Alex Nedeljkovic’s net and found a wide-open @Elias Lindholm in front with a backhand pass. The Swedish centre buried a quick shot to give the Flames an all-important 1-0 advantage.
Calgary wasted little time in doubling its lead. After picking up the secondary helper on Lindholm’s goal, @Erik Gudbranson notched the primary assist on the insurance marker when @Andrew Mangiapane picked up his rebound to the side of Nedeljkovic and quickly deposited it into Detroit’s cage.
@Dillon Dube also assisted on Mangiapane’s second goal of the season, which came just 4:27 after Lindholm opened the scoring.
The start of the second period brought an onslaught of chances for the home side. Detroit sent 14 shots Jacob Markström’s way in the middle frame while conceding just four.
Markström was perfect in all three periods on Thursday and was at his best in the second period, starting things off in spectacular fashion with this stop on @Nick Leddy.
After an evenly-matched third period, the Wings pulled their goaltender with less than three minutes remaining in regulation time. Moments later, @Matthew Tkachuk made Detroit pay with a 150-foot bullet into the centre of Nedeljkovic’s vacated net.
Gaudreau picked up the lone helper on Tkachuk’s first goal of the season, which clinched a 3-0 shutout victory for the Flames.

Detroit peppered Markström with shots from all over the offensive zone, including some very dangerous areas, but couldn’t finish on any of their opportunities.
The Red Wings needed to capitalize on some of their chances during the second period, in which they outshot the Flames 13-2 and won the expected goals battle 1.09 to 0.13 at 5-on-5. Calgary managed to hold on and did a much better job of holding the Wings to the outside in the final 20 minutes.
Here’s a look at the offensive heatmap from Thursday’s game, via Natural Stat Trick: 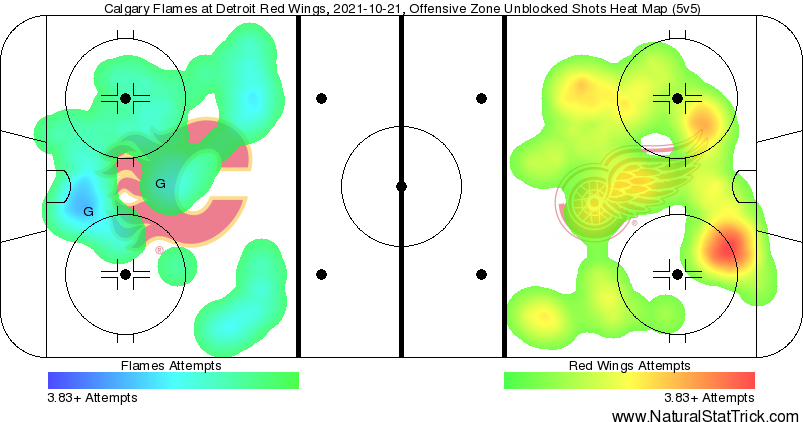 We’ll go with @Sam Gagner for this one. The 32-year-old journeyman had a very strong night on the defensive side of the puck, with the Red Wings allowing zero expected goals in Gagner’s 11:09 of play at 5-on-5 (according to NST).
With Gagner on the ice at 5-on-5, the Wings managed four scoring chances and allowed none. Not bad at all. Detroit could’ve used a few more Gagners to pick up the gagne on Thursday.

The Red Wings are heading out on the road! They’ll be at the cavernous Bell Centre on Oct. 23 to take on the 0-5-0 Montreal Canadiens. Puck-drop will go just after 7:00 p.m. ET on Bally Sports Detroit.
Uncategorized
Recent articles from Mike Gould