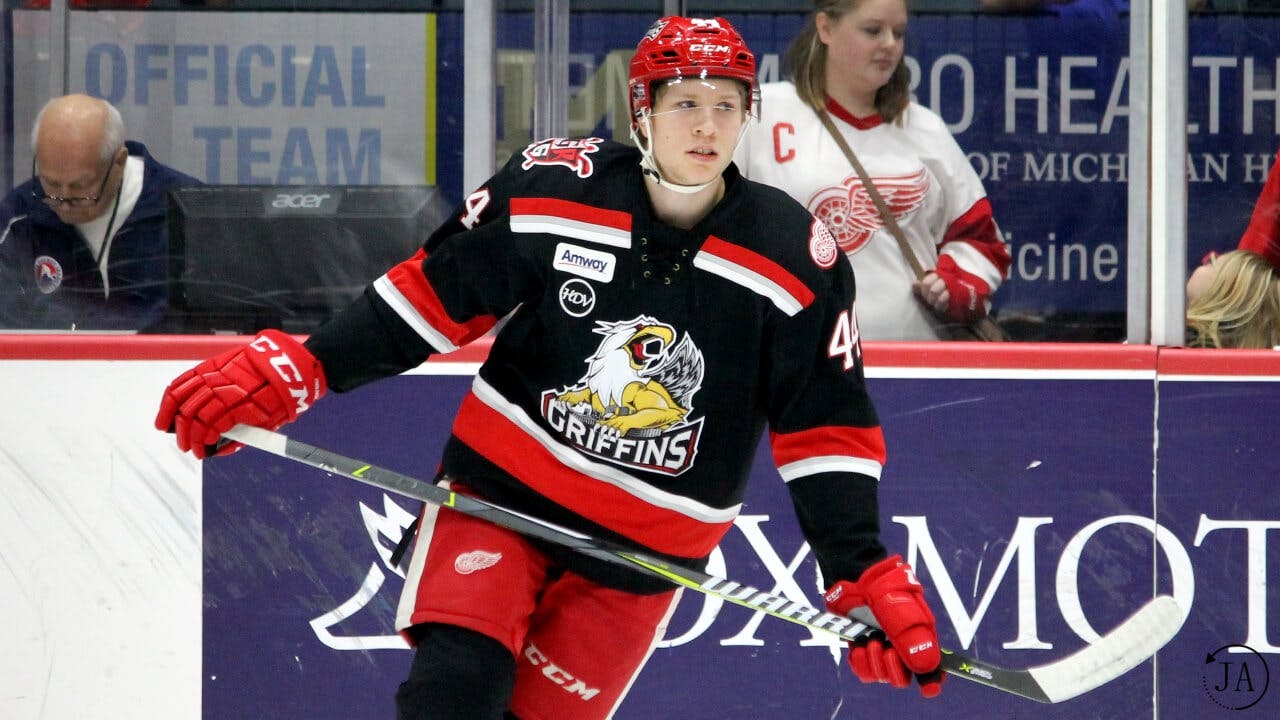 By Adam Laskaris
4 years ago
Comments
Would you rather have one Pavel Datsyuk‘s cap hit for one more year (as a fled-to-the-KHL retiree) and Jakob Chychrun, or Dennis Cholowski and Filip Hronek? That’s essentially the debate that Detroit had internally with themselves at the 2016 draft, where they eventually traded away the 16th pick away to Arizona along with Joe Vitale (who has not played a hockey game since) and Pavel Datsyuk’s cap hit,  in exchange for the 20th and 53rd overall pick, which the Wings used on Filip Hronek.
Since that fateful draft day, Cholowski’s development path is one that’s well, to put bluntly, exceedingly dumb.
After sticking around in the BCHL to keep his NCAA eligibility, Cholowski had a decent but not stellar first season with St. Cloud State. He then… turned pro for one game, killing his chances for a return to St. Cloud State, and then spent last season in the WHL, where he put 66 points in 69 games. It’s just one person’s opinion, but the Wings probably should’ve given Cholowski a bigger role when they brought him up to Grand Rapids and let him keep his NCAA eligibility, considering he spent two full seasons in the BCHL to maintain it.
Anyway, let’s get into what Cholowski actually brings to the table. We’ve seen he can obviously be a point-producing defenceman, but internal reports sound like he’s undergone a decent transformation since being selected.
Advertisement
Ad
Advertisement
Ad
From a Detroit Free press article with Red Wings Director of Player Personnel Shawn Horcoff:

“The biggest thing for him is he’s much more responsible defensively. That’s what it will come down to — how quickly can he gain the trust of the coach to be put other there against the other team’s best players? His skating and his offense come naturally for him, but can he gain Jeff Blashill’s trust in order to play?
“We drafted him for his skating and passing, but you have to be able to defend if you want to be an impact player. He has worked hard at it and he’s made good strides.”

Now a ripe 20 years of age, Cholowski will likely get a chance to crack the opening night roster, but unless Nick Jensen (or another defenceman) gets moved before the season gets going, it’s unlikely he’ll be slotting in for regular minutes.
Cholowski struggled to get much time in the AHL in either of his stints there, which is either the Detroit organization not having confidence in his abilities, or choosing to play much older players instead of developing their former first-round pick. Neither are great, but for Cholowski’s sake, that’s hopefully in the past.
Here’s a thread from our own Brad Krysko talking about the future (click to expand past these two tweets, although the Wings re-signing Mike Green kind of changes things):
Advertisement
Ad
Advertisement
Ad

1/ Here’s why at least two of Hicketts, Hronek, Sulak, and/or Cholowski need to make the Red Wings this season

Let’s all agree on one thing first. All of these four are near NHL ready, if not this season then next. Understanding that, Detroit is about to run into a problem.

2/ How many rookie defensemen can one team have at one time? I’d say two at the max so if only one of them make it this season then it means Detroit needs to open up THREE roster spots for 2019-20 and then play THREE rookies all season.

Rebuild or not, that’s too much.

However, even if there’s no trades, a pair of roster spots may open up as early as next season, as Niklas Kronwall and Nick Jensen are set to hit UFA.
It may be a cliche, but Cholowski’s future is as much dependent on him finding his way ahead of the other defensive prospects in the Wings’ system as it is on his own abilities. With an aging defensive core, Cholowski needs to be able to do something to stand out and land a regular roster spot within the next two years to really solidify his place in the NHL.
While unconfirmed, it’s likely he’ll spend much of this year in the AHL with Grand Rapids,