Justin Abdelkader’s big contract extension last season is a sign that the Detroit Red Wings have a lot of faith in him. The contract, worth $29.75 million over seven years ($4.25 AAV), is a clear sign that the team likes what Adbelkader brings to the table and they want him to bring more of it.

Abdelkader had a productive summer. He played on the top line with Patrick Kane for Team U.S.A. at the World Cup of Hockey. While the roster selection has been heavily scrutinized, Abdelkader’s selection and the role he was given is proof that coaches and GMs across the league have the same sort of respect for him as Red Wings management does.

But with America’s swift exit from the tournament, it’s maybe time to re-think where and how to play your grit. Despite leading the team in goals, Abdelkader’s grit wasn’t enough to oust Team Canada. So now he’s back in Traverse City for training camp, getting ready for a season that will be a great challenge for he and his fellow Red Wings teammates.

Hailing from Muskegon, Michigan, Abdelkader is one of four roster players playing for their home state team. He came up via the college route, playing for the Michigan State Spartans. In 2007, he led Michigan State to the NCAA Division 1 National Championship when he scored the game winning goal with just 18.9 seconds left in regulation. He was named the Frozen Four Most Outstanding Player.

In the 2005 NHL Entry Draft, Abdelkader was selected 42nd overall by the Detroit Red Wings. In 2008, he played for two regular season games and ten playoff games with the Red Wings. He joined the Wings for their 2008 Stanley Cup victory, but sadly did not play in enough games to have his name engraved on the Stanley Cup. He played most of the 2008-09 season in Grand Rapids, where he had an outstanding regular season and playoffs, and joined the Red Wings for their playoff run in the Western Conference Finals. He scored his first NHL goal in the 2009 Stanley Cup Finals in game one against the Pittsburgh Penguins. Alas, he hasn’t come that close to getting his name engraved on the Cup again.

Abdelkader has been a Red Wing his entire career and, if his contract extension is any indication, he’ll be one until the day of his retirement. 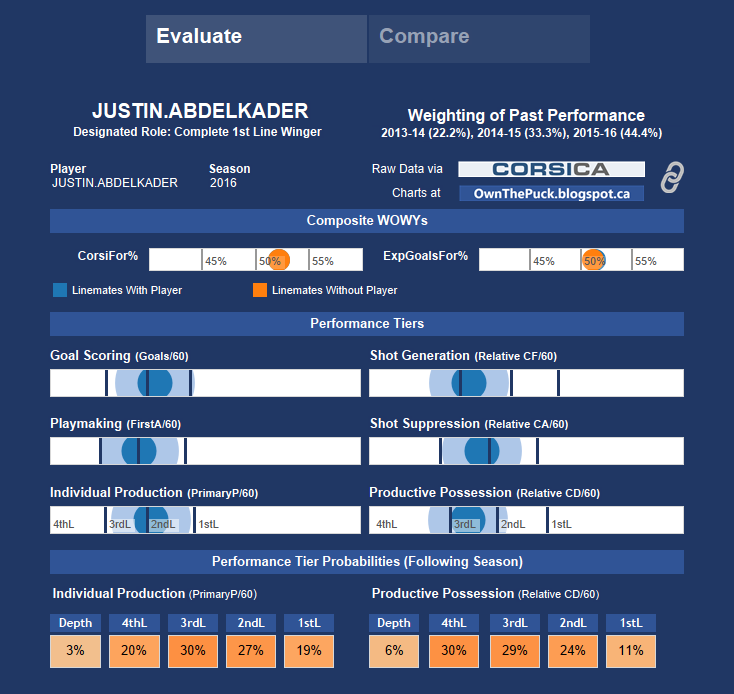 This HERO chart shows the production of a 2nd to 3rd line player, yet Abdelkader spent most of his time last season on the top line. The assumption is that Blashill likes a gritty player (there’s that word again…) playing alongside the skill so that  he can dig the puck out of corners to feed it to the superstars or throw his weight around in front of the net.

And maybe there’s something to that. Abdelkader had the second best offensive season of his career in 2015-16, putting up 42 points which was good for sixth on the team. Though he failed to crack 20 goals (he scored 19), he is still nearly doubling the amount that he was putting up in 2013-14 and prior.

But on the flip side, Abby had the worst possession season of his career. Dropping from a 5v5 CF% of 56.4% in 2014-15, he registered 49.8% last season. And the composite WOWYs in the HERO chart above clearly tell us that his linemates’ stats remain the same whether they play with Abdelkader or not. Basically, his linemates are not relying on him to pad their point production. They are doing it anyways.

In the playoffs, Abby took his grit to the next level as he took it upon himself to agitate the Tampa Bay Lightning team into submission. Unfortunately, it didn’t work as the Wings fell to the Lightning in five games. Abdelkader logged one goal and 35 penalty minutes in the series..

Among Justin Abdelkader’s comparables are three players off the Minnesota Wild roster, who coincidentally is also one of the most average teams in the league. Nino Neiderreiter, Charlie Coyle, and Thomas Vanek all posted 41 to 43 points last season. Travis Zajac of the New Jersey Devils and Artem Anisimov of the Chicago Blackhawks are also among this company, as well ad Bryan Little and Matthieu Perreault from the Winnipeg Jets (another incredibly average team last year).

From a salary perspective, Abby’s new contract falls in line with these comparables, but I can’t say that I’d prefer to have Abdelkader over any of these guys. They are all completely interchangeable from a point production and playing style perspective.

Abdelkader’s grit far outweighs his skill and he’s far from the best player on the Red Wings roster, but there’s no doubt that he’s a motivator off the ice and a workhorse on the ice. It’s why Pavel Datsyuk used to love playing with him.

Watch for Abdelkader to play on the top line with Henrik Zetterberg on the opposite wing and newly acquired Frans Nielsen playing centre. Abdelkader will score at least twenty goals this season and put up 45 points for a career high. He’ll see more time on the penalty kill than he will on the powerplay and he’ll again spend more time in the box than any other Red Wing.

Expect him to come out hot and re-energized this season. He’ll be playing with a chip on his shoulder after the disappointing Team U.S.A. showing at the World Cup of Hockey 2016 and the controversy surrounding his roster spot. He’ll also want to prove those wrong who say that he was only good because Pavel Datsyuk made him good.

Abdelkader has got a lot to prove and I’m ready to be proven wrong.

ALSO IN THIS SERIES