That’s how many current hall of fame players were on the 2002 Stanley Cup winning team. Add to that a legendary head coach, a rookie Pavel Datstyuk, and the Grind Line and you’ve got a recipe for success.

One of the best rosters ever assembled on a hockey team, it was hard to argue that there was any outcome where the Detroit Red Wings did not win the Stanley Cup. After a disappointing 2001 first round playoff exit to the Los Angeles Kings, Kenny Holland had the biggest offseason of his career to bring the team back to being contenders. First, he traded original Russian 5 winger Slava Kozlov and the 2002 First Round Pick to Buffalo for All-Star goaltender Dominic Hasek. Then, he made a big splash in free-agency bringing in elite sniper Brett Hull and veteran forward Luc Robitaille.

It’s amazing when you think that the Red Wings locked up $18M dollars in these two free agency signings, but this was before the salary cap existed and teams could exercise their spending power.

Well that, and Detroit was an attractive free agency destination back then when every year they were contending for a Stanley Cup. 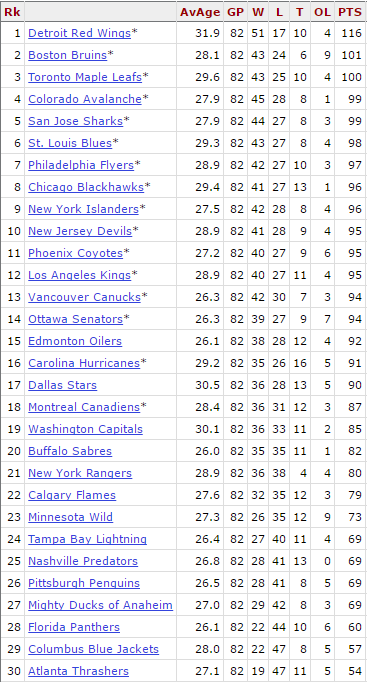 With 116 points, Detroit finished at the top of their division, conference, and the league. After the offseason activity, they were an early and easy pick by fans and media to win the Stanley Cup and the results reflected that. They were a whole fifteen points ahead of the second place Boston Bruins and seventeen points ahead of the next best record in the Western Conference.

The team did everything to live up to the hype once the season got underway, winning 22 of their first 27 games. Even with a weakened Steve Yzerman, who missed 30 games due to a nagging knee injury, the Red Wings frequently outscored their opponents by three, four, and five goals. It seemed as though the team was ready for another championships as all the elite players and team leaders played the best hockey of their careers: 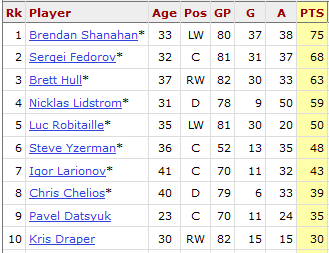 Rookie sensation Pavel Datsyuk quickly proved his worth by joining all of these future hall of famers at the top of team scoring. Both Hull and Robitaille recorded 30 goal seasons, 40-year old Chris Chelios put up 39 points, and Nick Lidstrom’s 59 points was league-leading among defensemen. Even Kris Draper managed to have a 30-goal season as part of The Grind Line.

The Red Wings sold out every single home game during the season. While the team finished 1st overall in the league standings at the end of the season, there were a few individual accomplishments along the way.

Today, the league continues to tease the fans about whether or not its players will participate in the Winter Olympics. In 2002, however, it was not a question. Eleven Red Wings players represented their countries in Salt Lake City and seven of them left with medals. The gold medal game, a nail biter between Canada and the U.S.A. pitted Steve Yzerman and Brendan Shanahan against teammates Brett Hull and Chris Chelios. Team Canada saw its first Olympic gold medal since 1952 that day.

The production by Detroit’s key players transferred over to the International ice as Yzerman led Team Canada in goals with 4 (tied with Mario Lemieux), Hull put up a team-leading 11 points, Lidstrom scored 5 goals, and Chelios recorded 5 assists. This team was all over the scoreboard in the NHL and in Salt Lake City.

The playoffs did not start off how everyone thought they would. Facing the 8th seeded Vancouver Canucks, Detroit lost the first two games of the series 4-3 (OT) and 5-2 respectively. After their second game loss, captain Steve Yzerman called for a players-only team meeting where he delivered a speech to re-invigorate and motivate his teammates. It worked. The team rallied to win the next four games, effectively eliminating the Canucks and moving on to face the St. Louis Blues in the second round.

Other than an embarrassing 6-1 game 3 loss to St. Louis, Detroit had no problem putting the Blues away, closing out the series in five games. Heading into the conference finals, the Red Wings would have to face their greatest challenge yet in their most bitter rival.

Coming off a historic Stanley Cup victory the season before, the Colorado Avalanche were determined to do it again. The two teams exchanged victories for the first four games of the series, two of which went to overtime. Game 5 was another tight bout that went to overtime, but ultimately the Avalanche scored the game winner and became the first team in the series to win two straight games. The Red Wings did not go quietly, though. They came back the following game with a definitive 2-0 win. Then, in game 7, the Wings came out firing as the team of elite players that they were, defeating the Avalanche 7-0 in one of the most surprisingly lopsided game 7 wins in recent memory.

On the other side of the league, in the Eastern Conference, an unlikely candidate emerged, knocking out the 2nd-seeded Toronto Maple Leafs of the Eastern Conference Finals. So when Detroit surfaced from their 7-game series against the Avalanche, the Carolina Hurricanes were waiting for them.

The series began only a few days after the conclusion of the Western Conference Finals and the Hurricanes came out strong, taking game 1 into overtime and winning the game 3-2. But Detroit came firing back in game 2 with a 3-1 victory. Game 3 would prove to be the most intense game, going into triple overtime before Igor Larionov netted the game winner, sending the Wings to a 2-1 series lead. That would be all the gas left in Carolina’s tank as they were shut out on home ice in game 4 and held to only one goal in game 5, where Brendan Shanahan scored two goals to secure the Red Wings third Stanley Cup in six years.

Nick Lidstrom, who led all team defencemen in playoff points with 16, was awarded the Conn Smythe Trophy. He finished the playoffs as the player who recorded the highest TOI and with a plus-6 rating. Steve Yzerman led the team in playoff points with 23. It was later confirmed, to the surprise of nobody, that Yzerman played the entirety of the playoffs with a bummed left knee. His persistence and dedication were second to none and the team rallied behind him to really cement themselves as one of the greatest teams in history.

The 2001-2002 season was an incredibly fun time to be a Red Wings fan. It was a near-perfect season with a perfect finish. The only regret I have about 2001-2002 is that we didn’t get to beat the Maple Leafs in the Stanley Cup Finals. Imagine being armed with that one the next time a Leafs fan throws a chirp your way?