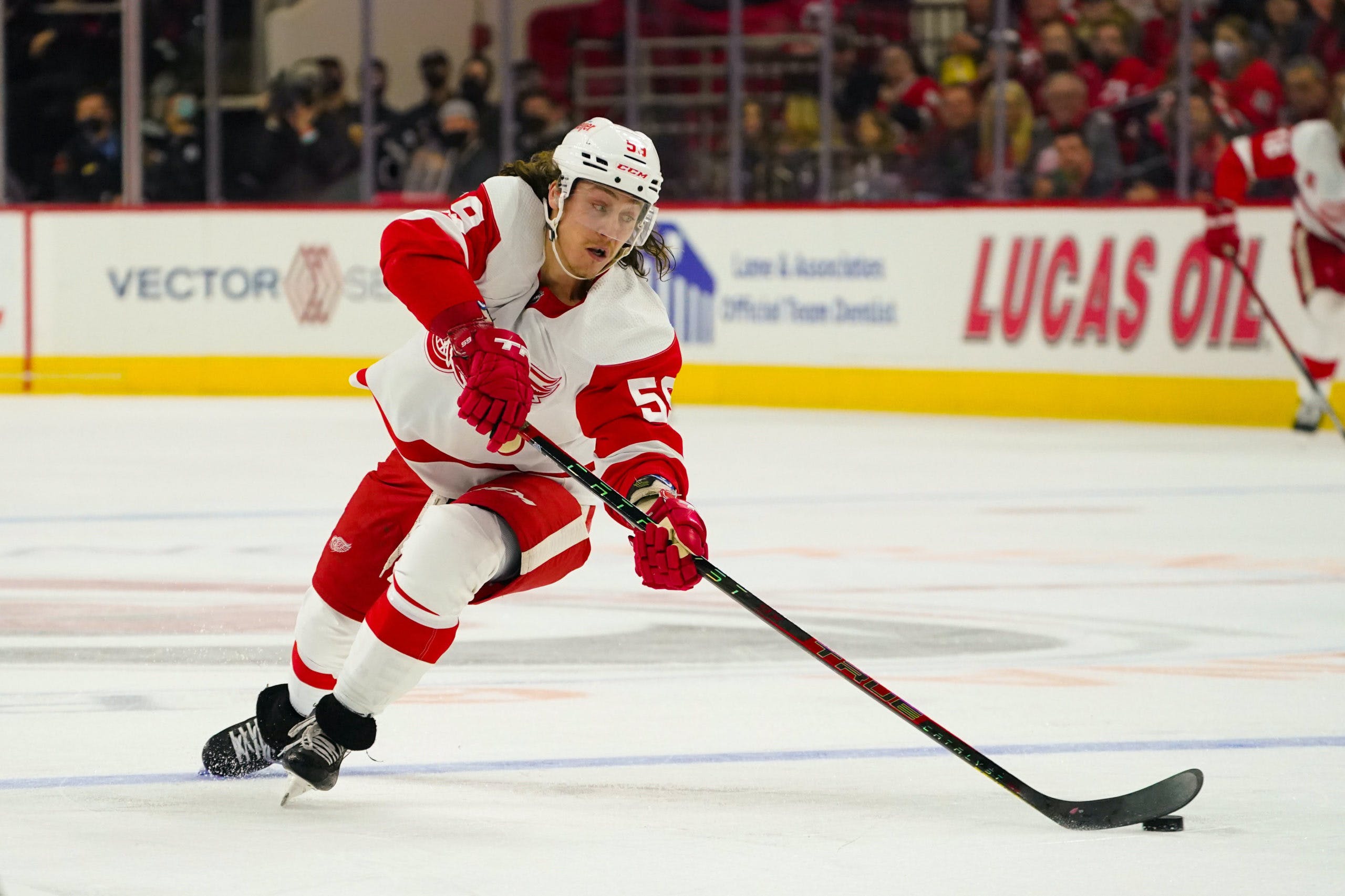 Photo credit: James Guillory-USA TODAY Sports
By Mike Gould
8 months ago
Comments
The Detroit Red Wings should have forward @Tyler Bertuzzi available to slot back into their lineup for Saturday’s game against the Seattle Kraken.
Bertuzzi, 27, was ineligible to play during Detroit’s last three games (all of which took place in Canada) due to his unvaccinated status. The Red Wings went 1–2–0 during that stretch, snapping a six-game losing streak with a 1–0 win over the Vancouver Canucks on Thursday.
No such restrictions extend to Bertuzzi playing in American cities, so he should be good to go in time for the Red Wings’ late-night duel against the Kraken (10:00 p.m. ET, Bally Sports Detroit).
When active, Bertuzzi has been one of the Red Wings’ most formidable players. The chippy winger has 24 goals and 24 assists in 50 games this season and is one point away from setting a new career-high mark in that category.
Advertisement
Ad
Advertisement
Ad
While Daily Faceoff‘s Frank Seravalli has suggested that Bertuzzi could be on the market as Monday’s trade deadline nears, all signs point to No. 59 suiting up for the Red Wings as they finish their first-ever season series against the Kraken.
These two teams last met in Detroit back on Dec. 1, 2021, with @Adam Erne netting the shootout winner to lift the home side to a 4–3 victory.
If he isn’t dealt by the time the puck drops to start Saturday’s game, expect @Nick Leddy to sit out once again as a healthy scratch for “asset protection” purposes. The 30-year-old defenseman is a prime candidate to be moved prior to the trade deadline.
After their win over the Canucks on Thursday, the Red Wings now rank 24th in the National Hockey League with a 25–29–7 record. The Kraken sit in 31st place — just narrowly ahead of the Montreal Canadiens — at 18–38–6.
Advertisement
Ad
Advertisement
Ad

Detroit: The Red Wings have to give @Alex Nedeljkovic the start after his performance on Thursday, right? The 26-year-old goaltender had one of his best outings of the season, stopping all 43 shots the Vancouver Canucks threw at him to help his team escape with a 1–0 shutout victory. It’s been an up-and-down first year in Detroit for Nedeljkovic, but perhaps he can get his save percentage back above .910 with a string of good performances down the stretch.
Seattle: With @Mark Giordano being held out of the lineup in preparation for a trade, expect to see @Vince Dunn given even more leeway to try and create offense from the back-end for the Kraken. The 25-year-old rearguard has found success in relatively bleak surroundings this year and is on track to nearly equal his career-best offensive output (35 points in 78 games) during the St. Louis Blues’ 2019 Stanley Cup season.
Advertisement
Ad
Advertisement
Ad

Saturday’s game at Climate Pledge Arena will be broadcast on Bally Sports Detroit starting at 10:00 p.m. ET. It’ll be sent over the airwaves on WXYT-FM 97.1 “The Ticket” in the Detroit area, as well as on the Red Wings’ official website.