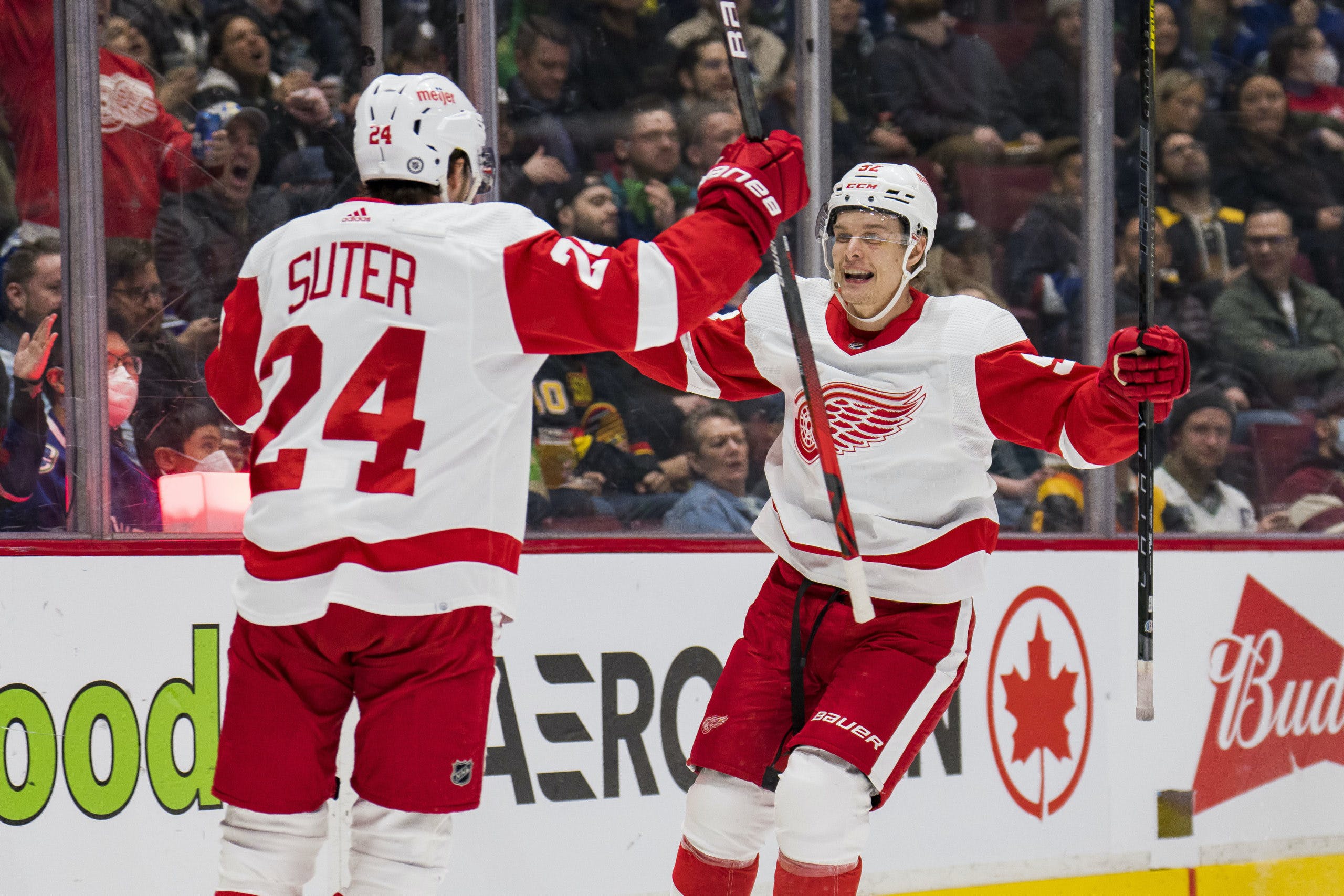 Photo credit: Bob Frid-USA TODAY Sports
By Mike Gould
8 months ago
Comments
Detroit Red Wings forward @Pius Suter snapped his 11-game pointless streak with the winning goal in Thursday’s game against the Vancouver Canucks.
Suter, 25, entered the contest having recorded his last point (an assist) back on Feb. 12 against the Philadelphia Flyers. He hadn’t scored a goal since Feb. 9 (also against Philadelphia).
The Swiss center broke the scoreless deadlock in Thursday’s game at the 8:09 mark of the second period. Suter’s goal came just as @Filip Zadina exited the box after serving a minor penalty for slashing.
With the Red Wings still down a man, Suter stripped the puck from Canucks captain @Bo Horvat in the Red Wings’ zone and quickly fed @Vladislav Namestnikov to kick off an odd-man rush.
Namestnikov sped down the right side into the offensive zone before looking off Canucks defenseman @Quinn Hughes and returning the puck to Suter through an open seam. With only @Thatcher Demko ahead of him, Suter managed to slide the puck between the pads of the Canucks goaltender to give the Red Wings a 1–0 lead.
Advertisement
Ad
Advertisement
Ad

SHORTY! Pius Suter slips one five-hole on the shorthanded odd-man rush to open the scoring for Detroit!#LGRW pic.twitter.com/Pclk6mfrME

Suter’s goal was all the Red Wings would need as they secured a 1–0 win over the Canucks. @Alex Nedeljkovic made 43 saves for his second shutout of the season; at the other end of the ice, Demko stopped 34 of the 35 shots he faced.
Playing in his first game back in Vancouver since being traded by the Canucks to the Florida Panthers last fall, Red Wings defenseman @Olli Juolevi logged 14:57 of ice-time, took a pair of shots, and posted some of the best underlying numbers on the team. (Juolevi also had a couple of suspect turnovers early on, but he settled in as the game progressed).
Advertisement
Ad
Advertisement
Ad

Olli Juolevi tonight against the #Canucks:

(all on-ice figures at 5v5, via @NatStatTrick)

Exactly what you want from a bottom-pair defender. #LGRW

@Nick Leddy sat out of Thursday’s game in Vancouver as an “asset protection” measure. The 30-year-old defenseman is very likely to be moved by the Red Wings prior to Monday’s trade deadline.
The Red Wings snapped a six-game losing streak with the victory over Vancouver and now have a 25–29–7 record in 61 games this season. At 30–25–7, the Canucks remain firmly in the playoff hunt but have lost a bit of ground to the Vegas Golden Knights (victorious against the Florida Panthers on Thursday).
@Tyler Bertuzzi should return for the Red Wings on Saturday evening when they finish their four-game road trip with a date against the Seattle Kraken (18–38–6) at Climate Pledge Arena. You’ll be able to catch that game on Bally Sports Detroit at 10:00 p.m. ET.
Advertisement
Ad
Advertisement
Ad