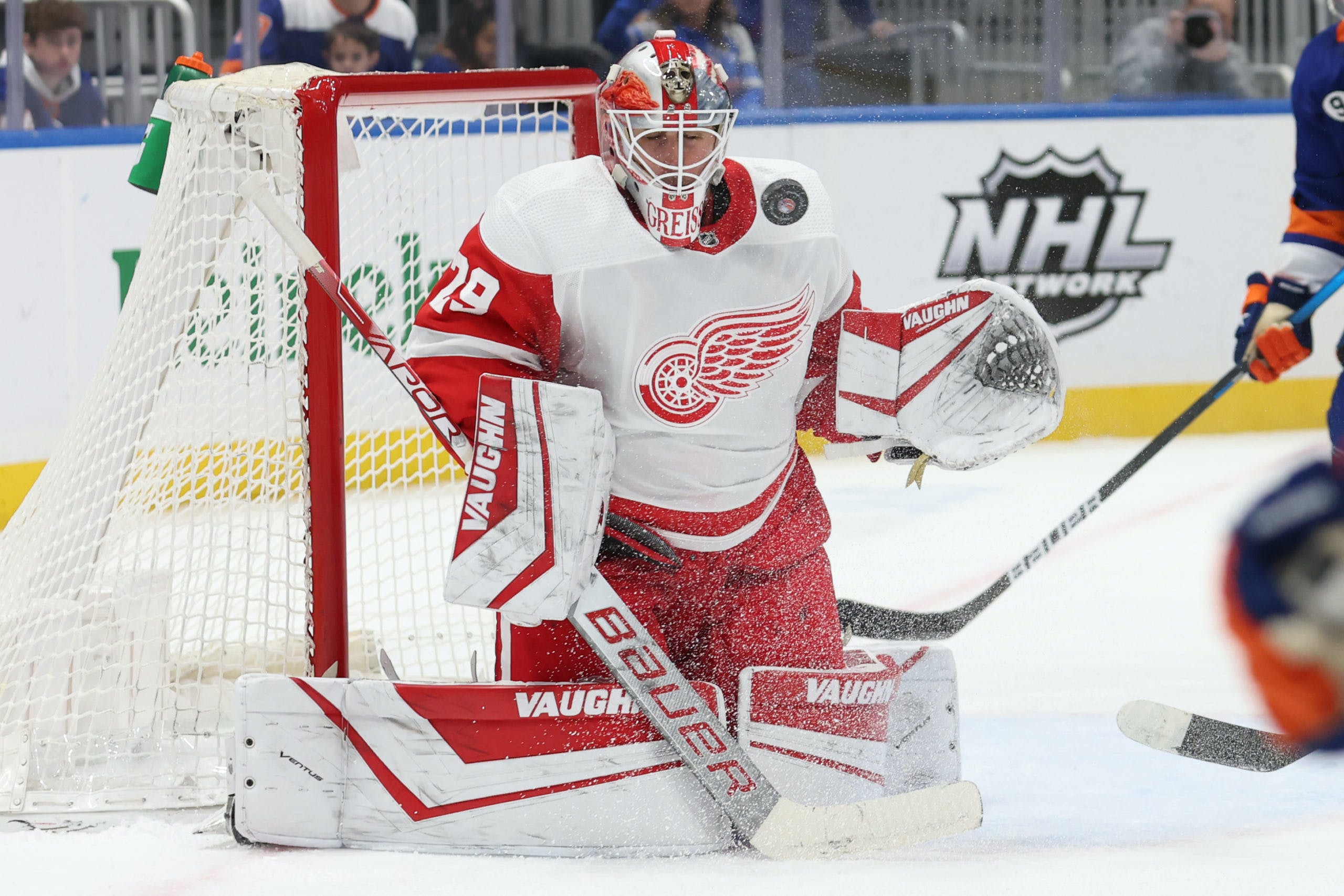 Photo credit: Brad Penner-USA TODAY Sports
By Mike Gould
8 months ago
Comments
Detroit Red Wings goaltender @Thomas Greiss did not finish Thursday’s game against the New York Islanders after being run over by opposing forward @Oliver Wahlstrom late in the second period.
According to Red Wings head coach Jeff Blashill, Greiss’ departure was indeed injury-related. The 36-year-old netminder was playing in his first game back on Long Island since departing for Detroit in 2020 after five years with the Islanders.
In 40 minutes of play on Thursday, Greiss allowed three goals on 16 shots. @Alex Nedeljkovic relieved Greiss for the third period, giving up two more goals on 10 Islanders attempts.
Greiss has now played 40 minutes or less in three of his last four starts. In his second season with the Red Wings, the product of Füssen, Germany has an 8–11–1 record and an .885 save percentage.
Advertisement
Ad
Advertisement
Ad

Thomas Greiss left Thursday's game on Long Island shortly after this collision with Oliver Wahlstrom late in the second period.

Wahlstrom was assessed a two-minute minor penalty for goaltender interference on the play. #LGRW pic.twitter.com/qv9mGjXion

The Red Wings trailed for all but nine seconds of Thursday’s game. Islanders forward @Anthony Beauvillier beat Greiss with his team’s first shot of the contest and the home side never looked back, taking a 4–0 lead by the 1:19 mark of the final frame.
@Brock Nelson scored twice in the game, with both Wahlstrom and @Josh Bailey adding goals of their own in the 5–2 victory. Even though they won, the Islanders were outshot 39–26 by the Red Wings at UBS Arena.
Islanders goaltender @Ilya Sorokin made 37 saves in the game to improve to 22–13–7 on the season. The 26-year-old sophomore has a .927 save percentage in 42 appearances in 2021–22.
Advertisement
Ad
Advertisement
Ad
@Pius Suter and @Sam Gagner scored Detroit’s only goals in the game. Gagner picked up his eighth of the year late in the third period to cut the Islanders’ lead to 5–2, taking a @Jakub Vrana pass in the high slot and rifling a wrister past Sorokin.
Vrana entered Thursday’s action with five goals in seven games with the Red Wings this season. His primary helper on Gagner’s goal was his first assist of the year (and only his fourth in 19 games since being acquired by Detroit at the 2021 trade deadline).

Playing in his National Hockey League debut, Red Wings forward @Chase Pearson logged just 7:40 of ice-time, threw a hit, took a shot on goal, and finished with a plus-one rating.
Advertisement
Ad
Advertisement
Ad
At the other end of the spectrum, Red Wings captain @Dylan Larkin led all forwards with 25:32 total TOI and seven shots on goal … and, like Pearson, zero points.
It remains to be seen which goaltenders will dress for the Red Wings (26–31–7) when they return to action on Saturday afternoon to take on the two-time defending Stanley Cup champion Tampa Bay Lightning (39–18–6) at Little Caesars Arena. You’ll be able to watch that game on Bally Sports Detroit at 12:30 p.m. ET.