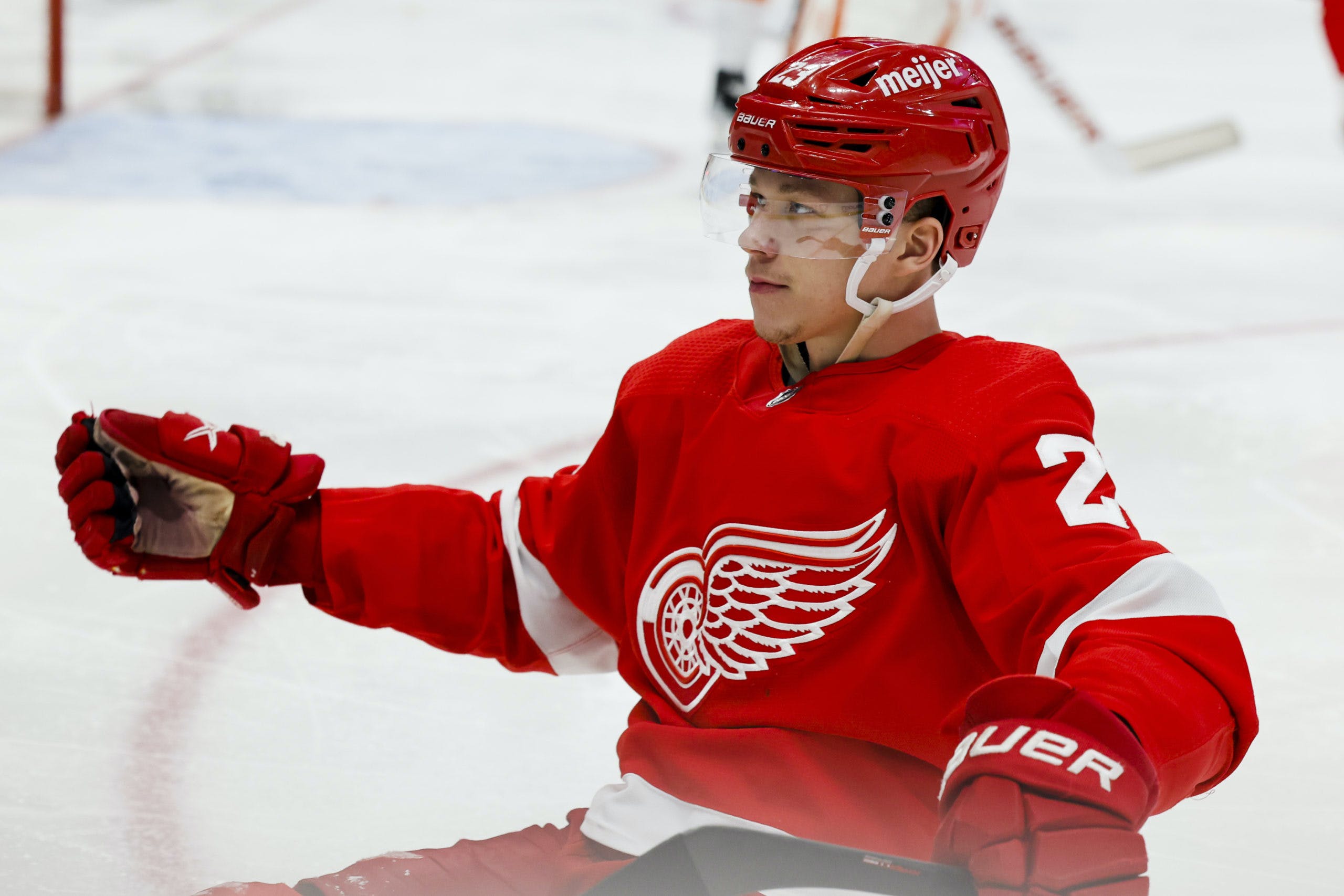 Photo credit: Rick Osentoski-USA TODAY Sports
By Mike Gould
8 months ago
Comments
Detroit Red Wings forward @Lucas Raymond became the third NHL rookie to reach the 20-goal plateau in 2021–22 with a one-time tally early in the second period against the Philadelphia Flyers on Tuesday.
Raymond, 19, set up at the left circle in the offensive zone with the Red Wings in possession and hammered a @Dylan Larkin pass by Flyers goaltender @Carter Hart to give his team a 3–0 lead.
Larkin and @Gustav Lindstrom picked up the helpers on Raymond’s 20th National Hockey League goal, which came at the 1:07 mark of the second period against Philadelphia.

Make that 20 goals on the season for @DetroitRedWings rookie Lucas Raymond! #LGRW pic.twitter.com/j2oezDdziO

Raymond, who the Red Wings selected with the fourth-overall pick at the 2020 NHL Draft, now has 48 points (20 goals, 28 assists) in 63 games this season. He joined Toronto’s @Michael Bunting and Nashville’s @Tanner Jeannot on the list of rookies with 20 goals in 2021–22.
Advertisement
Ad
Advertisement
Ad
In addition, Raymond became the fourth Red Wings rookie to score 20 goals since 1990. The other three members of that club are all pretty good: Larkin, Henrik Zetterberg, and Nicklas Lidstrom.
Finally, Raymond joined Alexis Lafrenière and Tim Stützle as the only members of the 2020 draft class to reach the 20-goal career milestone. Lafrenière and Stützle have both skated in more than 110 NHL games and respectively have 25 and 26 goals; Raymond has just 63 games under his belt and has already scored 20 times.

Three members of the 2020 draft class have now reached 20 goals for their careers:

Is that good? #LGRW

Advertisement
Ad
Advertisement
Ad
The Red Wings defeated the Flyers 6–3 on Tuesday. @Jakub Vrana scored twice for Detroit, which also received goals from @Oskar Sundqvist (in his Wings debut), @Tyler Bertuzzi, @Joe Veleno, and Raymond; @Joel Farabee, @Oskar Lindblom, and @James van Riemsdyk found the back of the net for the Flyers.
@Alex Nedeljkovic stopped 30 of 33 shots in Tuesday’s contest for his 17th win of the season, with the team as a whole improving to 26–30–7. The Red Wings will return to action on March 24 to take on the New York Islanders (27–25–9) at the brand-new UBS Arena.