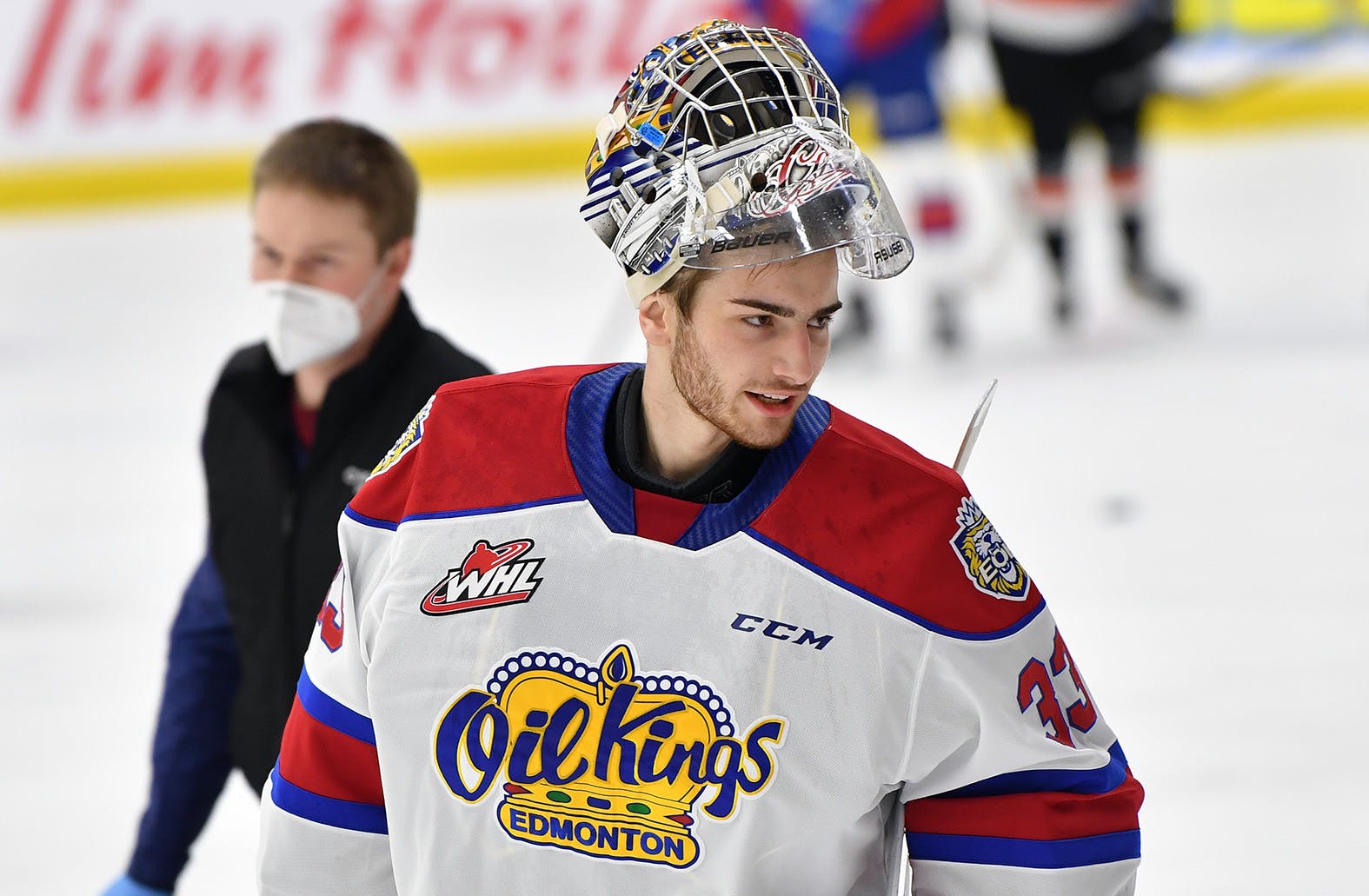 Photo credit: Edmonton Oil Kings on Twitter
By Liam Horrobin
6 months ago
Comments
There’s a brick wall between the home goalposts at Rogers Place — and his name is Sebastian Cossa.
Cossa and the Oil Kings have made it to the second round of the Western Hockey League playoffs and, to this point, have only allowed one goal in four games at home.
Brayden Edwards is the only player to beat Cossa at Rogers Place in the 2022 postseason, scoring late in the third period of Edmonton’s series-opening 4–1 victory over the Lethbridge Hurricanes. The Oil Kings ultimately swept the Hurricanes before advancing to face the Red Deer Rebels.
On Saturday, Cossa secured his third consecutive home playoff shutout, making 26 saves in the Oil Kings’ 5–0 win over the Rebels. The Oil Kings now lead that series 2–0 as the series shifts to Red Deer on Monday.
Advertisement
Ad
Advertisement
Ad
In six playoff appearances this year, Cossa has a .957 save percentage and a 1.00 goals-against average. Those figures improve to .990 and 0.25 when considering only Cossa’s home appearances.
Those are some remarkable numbers.
“Our whole team has been playing great but between [Cossa] and [Dylan] Guenther have been leading the charge for us,” Oil Kings forward Justin Sordiff said on the weekend. “[Red Deer] had a few chances on the powerplay but Sebastian made some timely saves for us.”
The Rebels are hardly a pushover team. They scored 264 goals, good to rank sixth in the entire WHL. Red Deer forwards Arshdeep Bains (112 points) and Ben King (102) respectively finished first and second in league scoring.
While his teammates have done a great job of limiting shots throughout the game by getting in shooting lanes and maintaining possession, Cossa still has to face some high-danger chances every night in the form of breakaways and one-timers.
Advertisement
Ad
Advertisement
Ad
Cossa’s biggest save in Game 2 came off one of those breakaways. Rebels forward Jhett Larson had a clear path to the Oil Kings’ net after Dylan Guenther spilt the puck at the blue line, but Cossa stood tall and denied Larson with a pad save.
“Cossa has been our rock back there,” said Jaxsen Wiebe, who the Oil Kings acquired from the Rebels prior to the 2021–22 season. “Every time they got a power play, they got some grade-A chances and he was there for us. That’s huge for us especially when we are playing a team as dangerous as Red Deer.”
Wiebe scored a pair of goals against his former team in Game 2 after failing to score in the Oil Kings’ first five postseason contests this year. Justin Sordiff (Florida Panthers), Dylan Guenther (Arizona Coyotes), and Jakub Demek (Vegas Golden Knights) also scored for Edmonton in the 5–0 win.
Advertisement
Ad
Advertisement
Ad
Even after posting a 19–3–3 record at Rogers Place during the regular season, Cossa has somehow managed to reach new heights in the playoffs with three consecutive shutouts at home.
Expect Cossa to be back between the pipes on Monday night when the Oil Kings make the short trip to Red Deer for Game 3 of their second-round series.