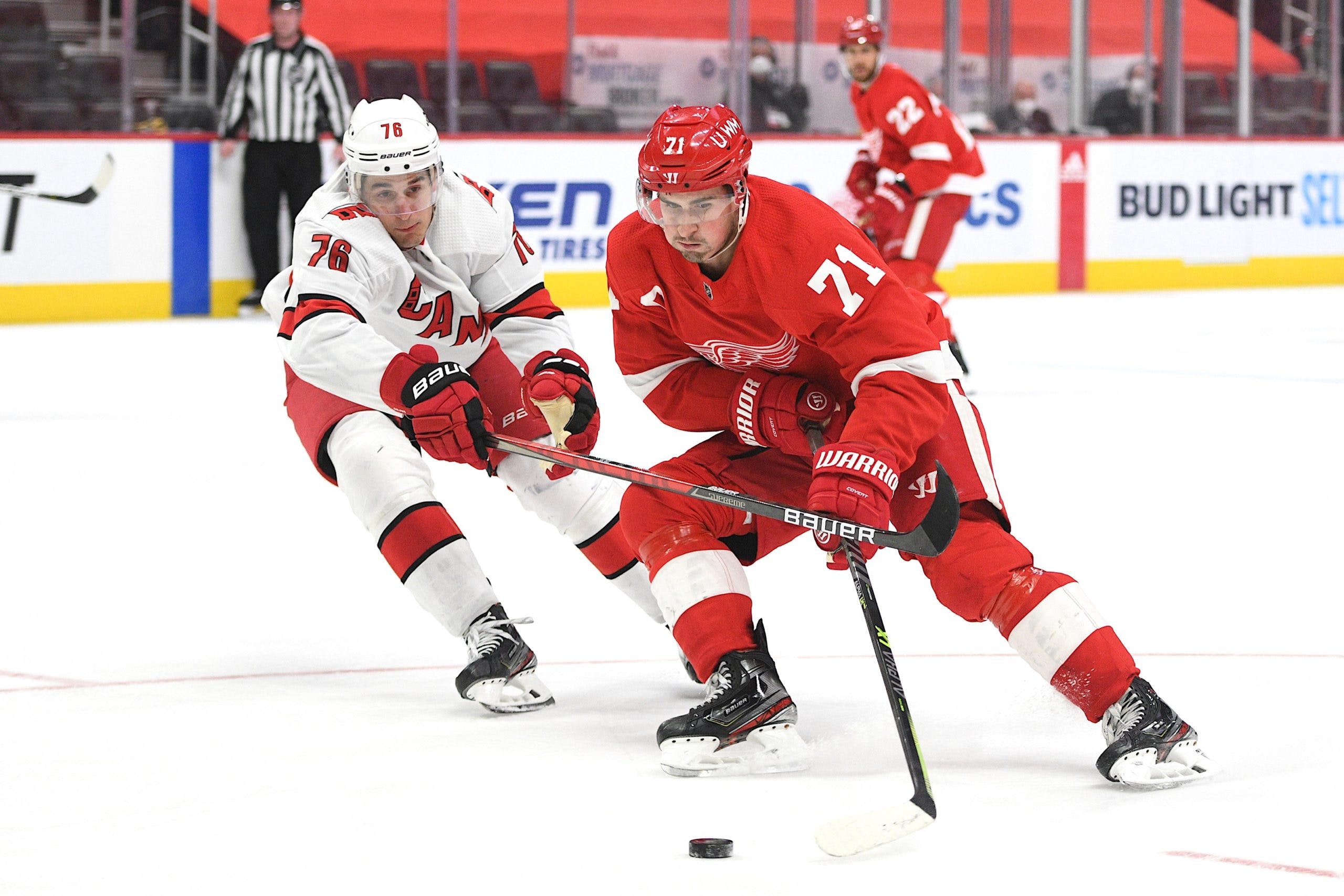 Photo credit: Tim Fuller-USA TODAY Sports
By Mike Gould
9 months ago
Comments
The Detroit Red Wings (23–24–6) will look to find some more stability in their game when they host the formidable Carolina Hurricanes (37–11–4) at Little Caesars Arena on Tuesday.
The Red Wings most recently fell to the Toronto Maple Leafs by a 10–7 score on Feb. 26. Needless to say, Jeff Blashill and Co. would prefer to see a significantly smaller goal total in Tuesday’s contest against the ‘Canes.
Detroit and Carolina have already met once this season, with the Red Wings falling by a 5–3 score in Raleigh back on Dec. 16, 2021. @Tyler Bertuzzi, @Dylan Larkin, and @Sam Gagner scored for the visitors in that contest; @Nino Niederreiter led the way for the home side with a pair of goals.
@Lucas Raymond scored twice in Saturday’s game for Detroit, which also received goals from @Sam Gagner, @Carter Rowney, @Filip Hronek, @Joe Veleno, and @Michael Rasmussen.
Advertisement
Ad
Advertisement
Ad
@Alex Nedeljkovic started in goal for the Red Wings against Toronto but was pulled midway through the first period after allowing three quick goals.
Then, Blashill made the unusual decision to put Nedeljkovic back in for the third period after backup @Thomas Greiss let in four goals during the second. (Good luck predicting Detroit’s starter for Tuesday’s game).
The Hurricanes are one of the National Hockey League’s top teams by nearly every metric and enter Tuesday’s contest on a five-game winning streak. Carolina leads the Metropolitan Division with 78 points in 52 games; Detroit ranks fifth in the Atlantic with 52 points in 53 games.

Detroit: @Lucas Raymond was the only member of the Red Wings’ top line to post a multi-point game in Saturday’s wild loss to the Maple Leafs. The 19-year-old winger scored twice and added an assist in the 10–7 loss, becoming the first NHL rookie to reach 40 points in the 2021–22 season. (@Dylan Larkin, @Tyler Bertuzzi, @Robby Fabbri, @Filip Zadina, and @Pius Suter somehow combined for only a single assist in the game).
Carolina: It feels like @Jordan Staal has been in the NHL forever, but he only just turned 33 last September. The 16-season veteran has been one of the Hurricanes’ few underachievers this year, with just five goals and 18 points to his credit through his first 50 games. Staal has one season remaining after this one at a $6 million cap hit and it remains to be seen how he’ll figure into the plans of a team that needs to re-sign the likes of @Martin Necas, @Ethan Bear, and @Jesperi Kotkaniemi.
Advertisement
Ad
Advertisement
Ad

Tuesday’s game at Little Caesars Arena will be broadcast on Bally Sports Detroit starting at 7:30 p.m. ET. It’ll be sent over the airwaves on WXYT-FM 97.1 “The Ticket” in the Detroit area, as well as on the Red Wings’ official website.