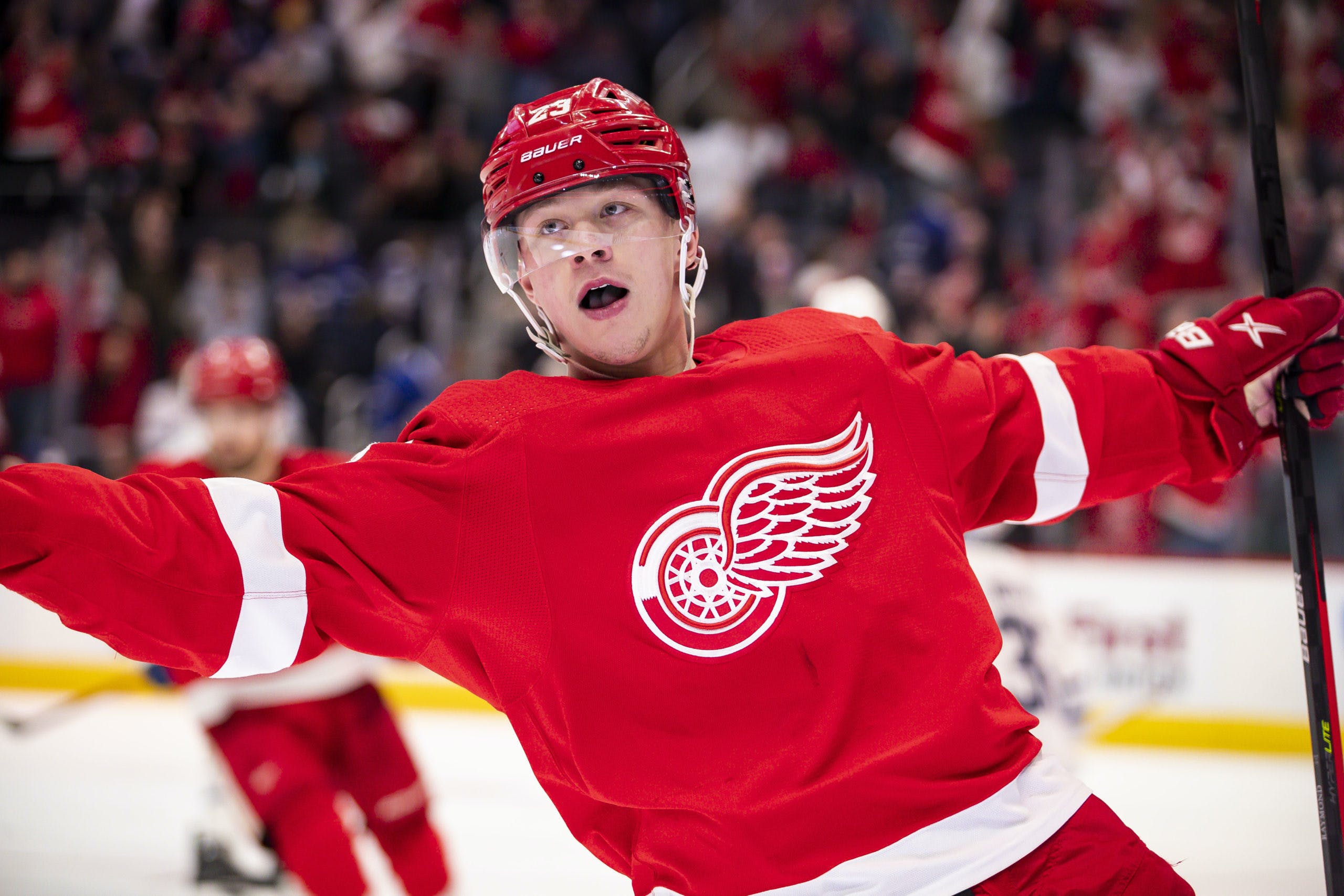 Photo credit: Raj Mehta-USA TODAY Sports
By Mike Gould
9 months ago
Comments
Detroit Red Wings forward @Lucas Raymond continued his excellent rookie season with a three-point outing against the Toronto Maple Leafs on Saturday.
Raymond, 19, tallied a pair of goals and added an assist in Detroit’s wild 10–7 loss to Toronto. With his first goal of the night, Raymond became the first rookie to reach 40 points in the 2021–22 National Hockey League season.
In the process, Raymond cemented his place alongside a certain “Nicklas Lidstrom” in the Red Wings’ history books.

Lucas Raymond boosted his season totals to 14-26—40 (53 GP) and became the first rookie to reach the 40-point mark this season.#NHLStats: https://t.co/IhQQaL7gc3 pic.twitter.com/tKbcr4XeE6

The 2020 fourth-overall pick now has 15 goals and 42 points in 53 games with the Red Wings this season. He trails only team captain @Dylan Larkin (26 goals, 55 points) and winger @Tyler Bertuzzi (23 goals, 44 points) on the Red Wings’ goals and points leaderboards.
Advertisement
Ad
Advertisement
Ad
Raymond scored Detroit’s first and last goals in Saturday’s game, cutting an early Toronto lead to 2–1 at the 10:33 mark of the first period before tallying the fifth (and final) goal of Detroit’s exciting comeback effort in the third period.

The @DetroitRedWings are right back in this one as Lucas Raymond bangs home the rebound! #LGRW pic.twitter.com/FbUsw9x4AX

With a five-point outburst of his own in the high-scoring victory, Maple Leafs forward @Michael Bunting became the second rookie to 40 points on the season. Bunting, 26, was drafted by the Arizona Coyotes way back in 2014 and finally emerged as a full-time NHL player in Toronto this season, having scored 18 goals and 40 points in 52 games in 2021–22 while primarily playing on @Auston Matthews’ wing.
Advertisement
Ad
Advertisement
Ad
@Trevor Zegras (13 goals, 39 points), @Moritz Seider (five goals, 39 points), and @Anton Lundell (12 goals, 36 points) round out the top five in the current NHL rookie scoring race. With two assists in Saturday’s game, Seider extended his own personal point-scoring streak to six games (and tied Reed Larson’s Red Wings record for the longest such stretch by a rookie defenseman).