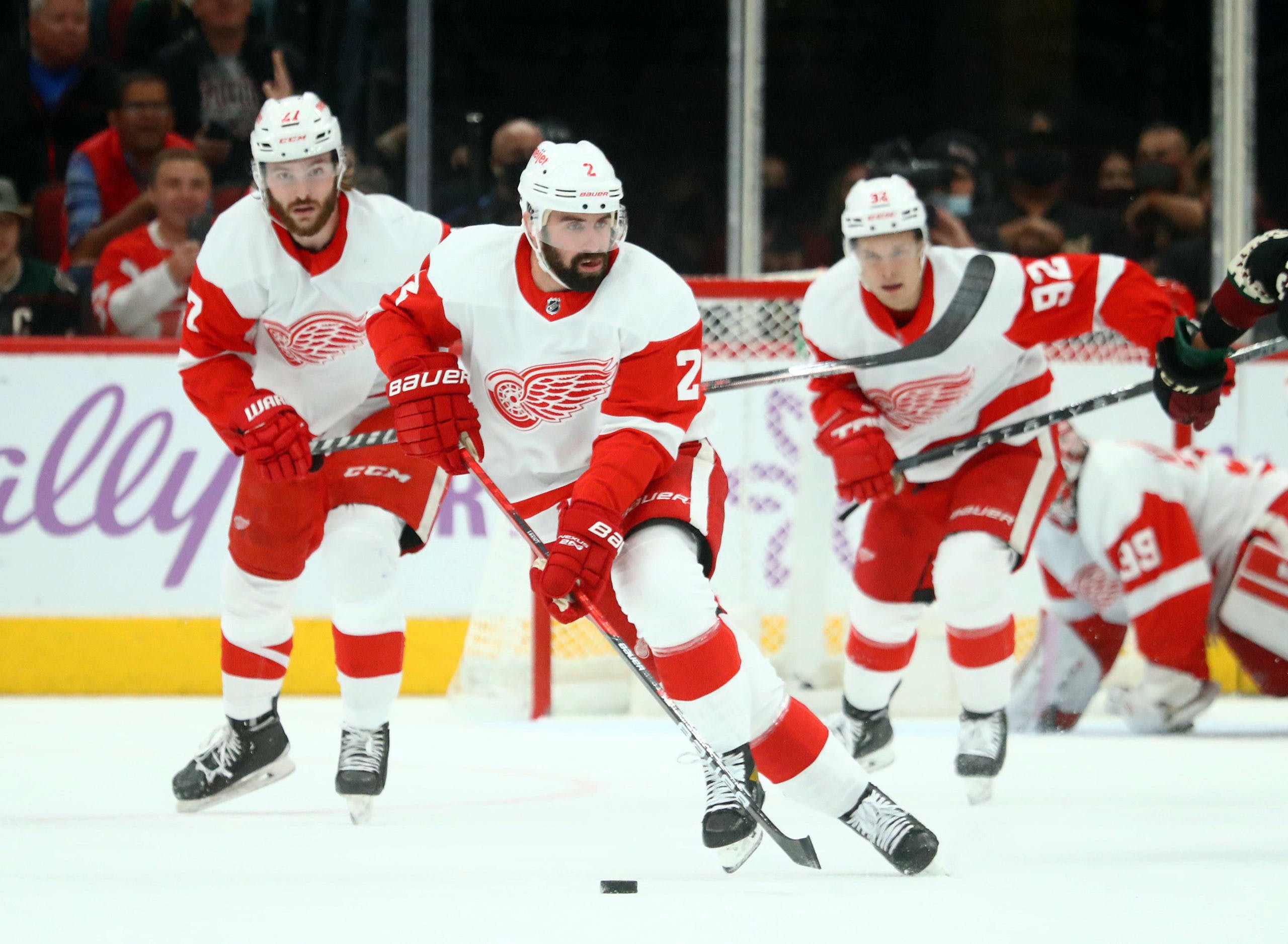 Photo credit: Mark J. Rebilas-USA TODAY Sports
By Mike Gould
8 months ago
Comments
Good morning, Red Wings fans. Welcome to trade deadline day!
The Detroit Red Wings got ahead of the game on Sunday when they dealt pending UFA defenseman @Troy Stecher to the Los Angeles Kings, but general manager Steve Yzerman will likely still be very active prior to Monday’s 3:00 p.m. ET deadline.
At 25–30–7, the Red Wings set well outside the Eastern Conference playoff picture and should primarily be sellers before this year’s deadline passes. @Nick Leddy, @Thomas Greiss, @Vladislav Namestnikov, @Sam Gagner, and @Marc Staal are among the Red Wings players who could be on the move today.
Frank Seravalli will have all the latest breaking news on the Red Wings and from around the National Hockey League on the Daily Faceoff 2022 Trade Deadline live show, which will begin streaming on YouTube at 12:00 p.m. ET.
Advertisement
Ad
Advertisement
Ad
For now, let’s take a look at three of the biggest questions the Red Wings could answer through their actions (or lack thereof) on deadline day.

1. Where will Nick Leddy end up?

Even after Stecher’s departure, the Red Wings still have more than a half-dozen pending UFAs remaining on their roster. @Nick Leddy is easily the most likely to be moved out of that bunch.
To put it simply, the Red Wings have absolutely no reason to keep Leddy beyond Monday’s deadline. They acquired him from the New York Islanders last summer with the hope that he’d be an effective veteran to mentor @Moritz Seider; instead, Leddy has struggled to find a consistent role in the lineup and has just one goal in 55 games this year.
Will the Red Wings trade Nick Leddy? Barring something completely unforeseen, the answer to that question is “yes.” So … where? Could he join Stecher in Los Angeles? If the Calgary Flames were to move out some money, could he go there? The Red Wings could very well answer these questions on Monday.
Advertisement
Ad
Advertisement
Ad

Last week, Daily Faceoff hockey insider Frank Seravalli made waves by suggesting that @Tyler Bertuzzi could be the subject of trade discussions between the Red Wings and various other National Hockey League teams.
On the surface, the 27-year-old winger looks like a very valuable trade chip for the Wings. Bertuzzi has a career-high 49 points (24 goals, 25 assists) in just 51 games with Detroit this season and signed through the end of 2022–23 at a very reasonable $4.75 million cap hit.
Then, there’s the reason why Bertuzzi has appeared in only 51 games with the Red Wings this season: he’s unvaccinated. As a result, he’s ineligible to play games in Canada. Why would a team trade for someone like Bertuzzi when they might only be able to use him in half of a playoff series?
Advertisement
Ad
Advertisement
Ad
For that reason, a Bertuzzi deadline deal seems a little far-fetched. It’s possible that the rules change prior to next season to allow players like Bertuzzi more freedom to travel between the NHL’s two countries. Until then, it’ll be tricky — but perhaps not impossible? — to move him.

3. Will Steve Yzerman shock everybody again?

One of the very last deals to be reported on last year’s trade deadline day was a blockbuster trade between the Detroit Red Wings and Washington Capitals.
Right at the buzzer, Detroit acquired a hefty package (including @Jakub Vrana and a 2021 first-round pick) from the Capitals in exchange for @Anthony Mantha. The deal shook the hockey world and it still remains to be seen who will emerge as the winner (although early returns heavily favour the Red Wings).
Advertisement
Ad
Advertisement
Ad
Will the Red Wings try and replicate the atom bomb that was last year’s Mantha-for-Vrana trade, or will they go a more low-key route and stick to selling off their veterans? Never count out Steve Yzerman when it comes to making a splash.

Less than a week away from the NHL Trade Deadline and @DailyFaceoff will have you fully covered!

3.5 hours of breaking news and top-notch analysis with @frank_seravalli and @PeteBlackburn and our full staff! Live at noon eastern.