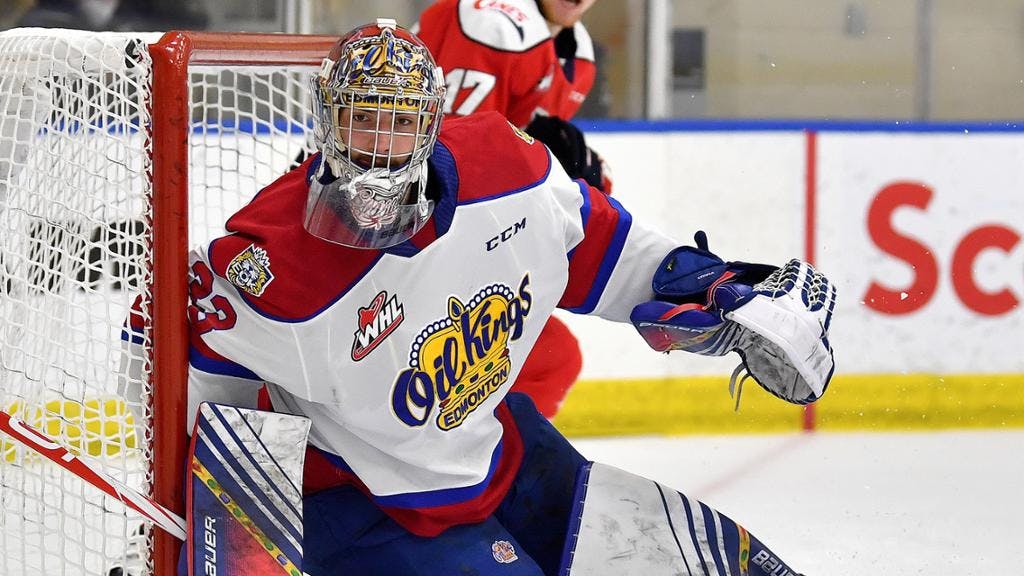 By Liam Horrobin
6 months ago
The Edmonton Oil Kings have been a dominant force in the Western Hockey League for three seasons now. Unfortunately for them, with the landscape of the world at the moment, they’ve not had the opportunity to compete for a championship.
Their last playoff game came in 2020 when they lost to the Prince Albert Raiders in the WHL’s Eastern Conference Finals. Only a few players from that team are still with the Oil Kings now.
You could see the excitement of being back in the postseason on Thursday in game one of their first-round series against the Lethbridge Hurricanes. Edmonton’s high-octane offence was shaky in the early parts of the first period and struggled to gain much offensive zone time.
Luckily for them, Sebastian Cossa didn’t allow the occasion to overwhelm him.
“He (Cossa) was there for us tonight,” said Head Coach Brad Lauer. “He made those saves that we needed at the right time. That’s what you need for your boys this time of the year.”
The big save Lauer is referring to came in the first period. Cossa denied Justin Hall on a shorthanded breakaway and then made two more big saves later in the period. Without those key stops, the game could’ve gone in a different direction.
It’s to no surprise that Cossa showed up for Edmonton. He’s been a key player in the organization’s success since he arrived in 2019. He played a career-high 46 games this season, finishing with a 0.913 save percentage.
“He was unbelievable,” said Dylan Guenther. “The breakaway save he made in the first period was huge for us. We have a lot of confidence in his back there. We expect him to keep performing like that for us throughout the playoffs.”
Cossa finished the game strong, stopping 25 of 26 shots in a 4–1 Oil Kings victory. He was unfortunate not to close out the game and get a shutout. He was beaten on the powerplay with under two minutes to play by Tyson Laventure.
The next step for Cossa and the Oil Kings is to make it a 2-0 series. They’ll go head-to-head with the Hurricanes tonight at Rogers Place. Edmonton has taken care of business throughout the regular season against Lethbridge, going 6-2-0.
“You know, playoff series are so quick,” said Sebastian Cossa. “It doesn’t matter the score; obviously the results matter, but I think just resetting and getting ready to go.”

Looking to up your fantasy hockey game? DailyFaceoff has the tools you need for both daily and season-long fantasy leagues, including a lineup optimizer, daily projections, and a whole lot more. Sign up for the DailyFaceoff tools here.
Content
Recent articles from Liam Horrobin