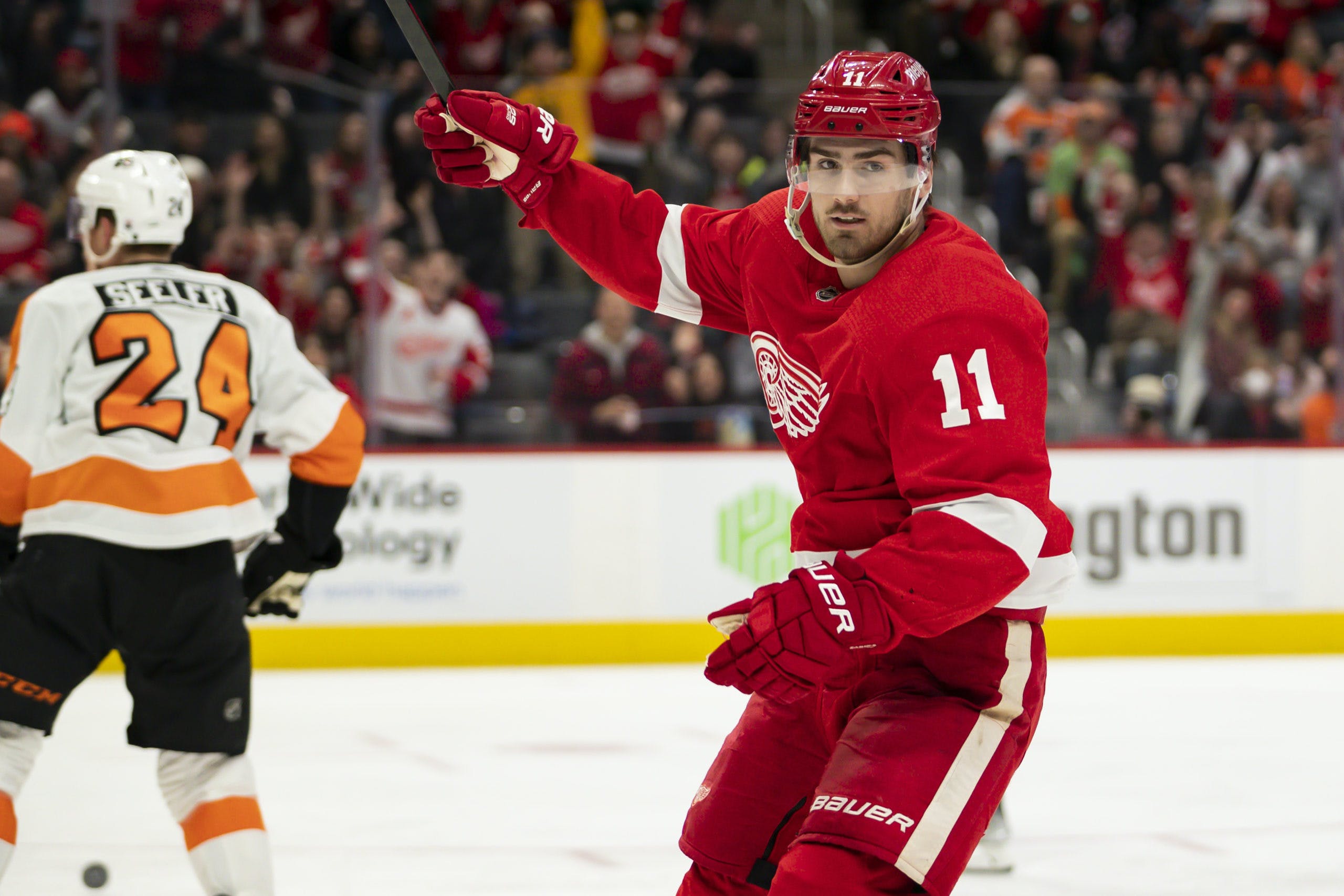 Photo credit: Raj Mehta-USA TODAY Sports
By Mike Gould
9 months ago
Comments
Detroit Red Wings captain @Dylan Larkin set up goals by @Filip Zadina, @Moritz Seider, and @Michael Rasmussen to help his team defeat the Philadelphia Flyers 4–2 in Saturday’s matinee matchup.
Seider’s power-play goal early midway through the third period eventually stood as the winner. After barely missing on a one-time opportunity earlier in the shift, Seider took a pass from Larkin at the point and prepared for another attempt.
This time, his aim was true.

@Thomas Greiss stopped 32 of the 34 shots he faced for his first win since Dec. 18 (and his seventh of the season). The 36-year-old German improved to 7–7–1 on the season with an .898 save percentage.
The Red Wings goal Larkin didn’t factor into came off an excellent passing play by the “Guelph Connection” line. @Tyler Bertuzzi was the ultimate beneficiary off a give-and-go with @Robby Fabbri, scoring his 23rd goal of the season (putting him one shy of Larkin for the team lead).
Advertisement
Ad
Advertisement
Ad

Detroit’s prettiest goal on Saturday came off the stick of @Filip Zadina, playing in his second game on the team’s top line.
After Larkin carried the puck end-to-end with blazing speed, Zadina picked up a drop pass just inside the Flyers’ blue line and wired a shot past goaltender @Carter Hart. Zadina’s sixth goal of the season gave the Red Wings a 2–0 lead at the 9:37 mark of the second period.

@Keith Yandle and @Scott Laughton scored in the game for Philadelphia. 10 different members of the Red Wings registered points, with Larkin having the only multi-point night for Detroit. Zadina, Fabbri, Bertuzzi, Rasmussen, Seider, @Lucas Raymond, @Sam Gagner, @Pius Suter, and @Marc Staal each recorded a single point in the win.
Advertisement
Ad
Advertisement
Ad
The Red Wings improved to 22–21–6 on the year; the Flyers fell to 15–24–8 and continued to rank dead-last in the Metropolitan Division. Detroit will return to action in Minnesota on Monday to do battle with the 28–11-3 Wild.