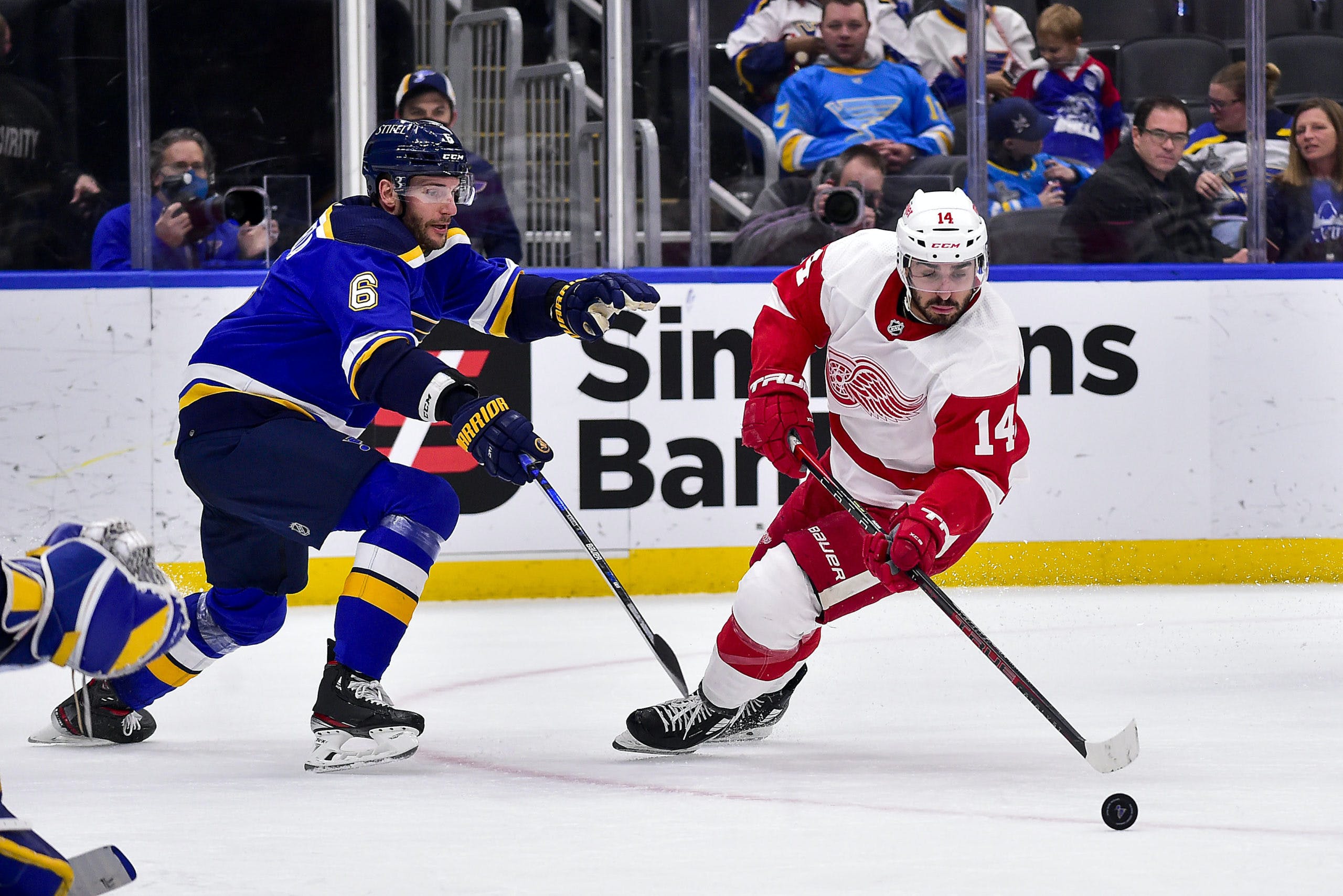 Photo credit: Jeff Curry-USA TODAY Sports
By Mike Gould
11 months ago
Comments
Despite losing to the St. Louis Blues by a 6–2 score on Thursday, the Detroit Red Wings received a pair of goals from a former Blue in the game.
@Robby Fabbri, who joined the Red Wings in 2019 after winning the Stanley Cup with St. Louis earlier the same year, scored twice for Detroit in Thursday’s setback.
Fabbri’s first goal of the night cut the Blues’ lead to 2–1 early in the second period. It came off a nice Red Wings passing play involving team captain @Dylan Larkin and rookies @Moritz Seider and @Lucas Raymond, the latter of whom set up Fabbri to take his shot after delivering a little touch pass right to the blade of his stick.
Raymond and Larkin picked up the helpers on Fabbri’s seventh goal of the season.
Advertisement
Ad
Advertisement
Ad

Robby Fabbri scores (again) against his former team, this time in his return to St. Louis! The @DetroitRedWings are on the board! #LGRW pic.twitter.com/xnnomZoqqr

Fabbri’s second goal came in garbage time with his team already down by four, but at least it was nice. The 25-year-old winger took a long stretch pass from Raymond at the opposing blue line before skating uncontested toward Blues goaltender @Charlie Lindgren.
After dragging the puck over to his backhand, Fabbri flipped it past Lindgren’s blocker to make it a 5–2 game. @Filip Hronek picked up the secondary assist on Fabbri’s eighth of the year.

Advertisement
Ad
Advertisement
Ad
Blues forward @Nathan Walker stole the show on Thursday with three goals, becoming the first Australian-born player ever to record a hat trick in the National Hockey League. Red Wings goaltender @Alex Nedeljkovic allowed three goals on 18 shots in the first two periods before being replaced by @Thomas Greiss in the third; Greiss allowed a further two goals on just seven shots.
@Colton Parayko, @Ivan Barbashev, and @Marco Scandella also scored for St. Louis. The Red Wings fell to 13–11–3 with the loss but will have a chance to rebound on Friday when they take on the Colorado Avalanche.