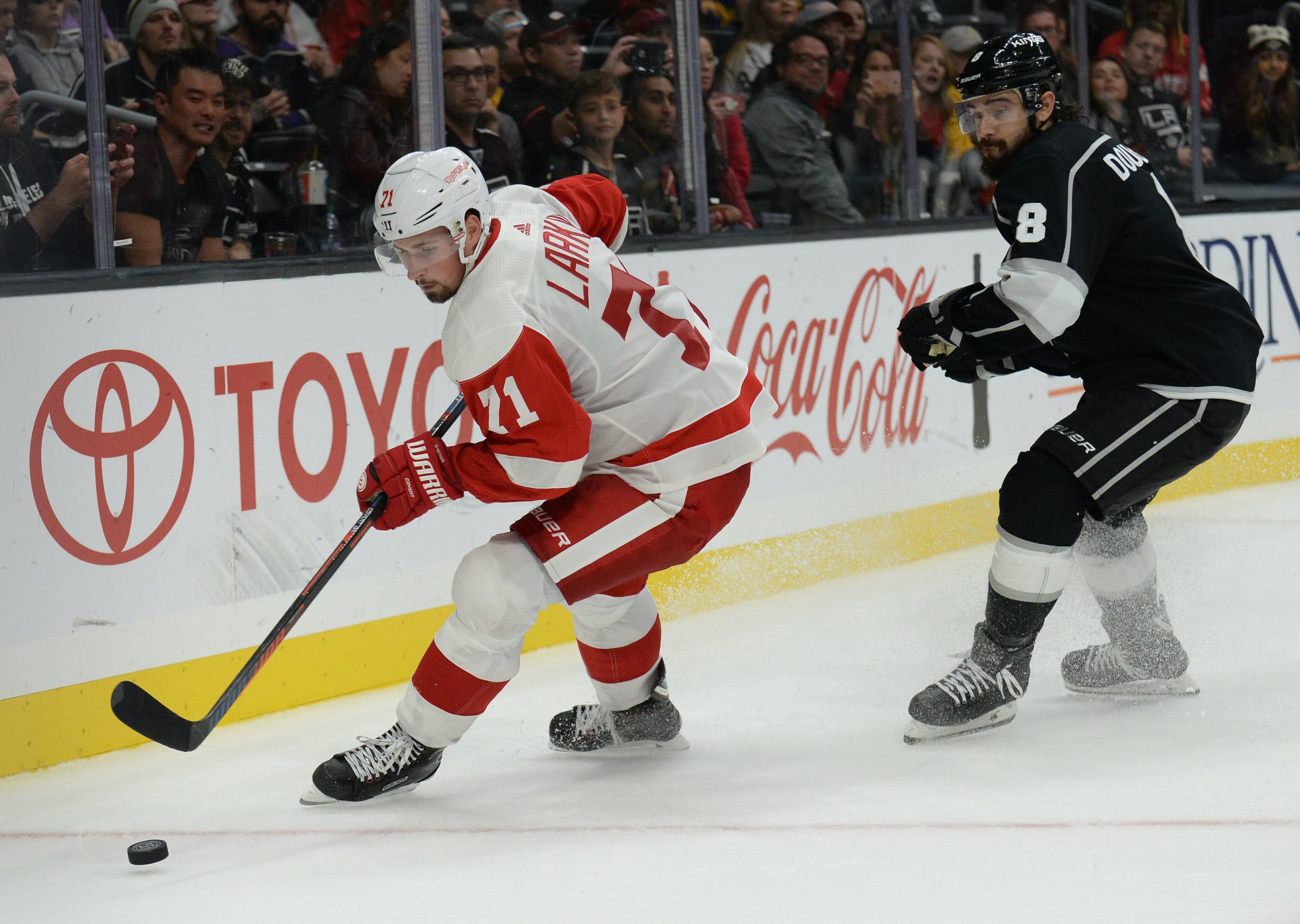 Photo credit: Gary A. Vasquez-USA TODAY Sports
By Mike Gould
10 months ago
Comments
The Detroit Red Wings’ annual California road trip will begin on Saturday — two days later than originally scheduled — with a game against the Los Angeles Kings.
Detroit was previously supposed to open up its road swing with a game in Anaheim on Thursday. Due to COVID-19 issues affecting the Ducks, the National Hockey League postponed that game to Jan. 9 (creating a back-to-back situation for the Red Wings).
The additional time off meant more opportunities for the Red Wings to ease injured forward @Jakub Vrana back onto the ice for individual skating sessions.
The 25-year-old forward has yet to make his season debut for the Red Wings after undergoing shoulder surgery during training camp. While he isn’t expected back until mid-February, Vrana’s presence on the road with the team is undoubtedly a good sign.
Advertisement
Ad
Advertisement
Ad
The Kings will likely be without top-six forward @Alex Iafallo for Saturday’s game. The 28-year-old winger, who ranks second on the Kings with 20 points in 33 games this season, entered COVID-19 protocol on Jan. 3.
Los Angeles most recently faced off against the Nashville Predators on Jan. 6, falling by a 4–2 score despite outshooting the opposition 48–20. @Dustin Brown and former Red Wing @Martin Frk scored for the Kings in the loss.
The Red Wings’ most recent game came on Dec. 4, when they dispatched the San Jose Sharks 6–2. @Tyler Bertuzzi and @Pius Suter both scored twice in the victory.

Detroit: After his hot start to the season, @Vladislav Namestnikov has really slowed down as of late. The 29-year-old winger has just two goals and six assists in his last 20 games after starting the season with seven goals in 14 contests. With Namestnikov set to become an unrestricted free agent in July, you’d have to think Detroit will be keen on moving him — but when, and to where?
Los Angeles: Talk about a familiar face: @Martin Frk made his Kings season debut on Jan. 6, playing alongside @Anze Kopitar and @Adrian Kempe on the team’s top line. The 28-year-old winger scored 31 points in 98 games over two seasons with the Red Wings from 2017 to 2019. Frk scored a power-play goal in the third period on Thursday to cut the Nashville Predators’ lead to 3–2:
Advertisement
Ad
Advertisement
Ad

Saturday’s game in Los Angeles will be broadcast on Bally Sports Detroit starting at 10:30 p.m. ET. It’ll be sent over the airwaves on WXVT-FM 97.1 “The Ticket” in the Detroit area, as well as on the Red Wings’ official website.