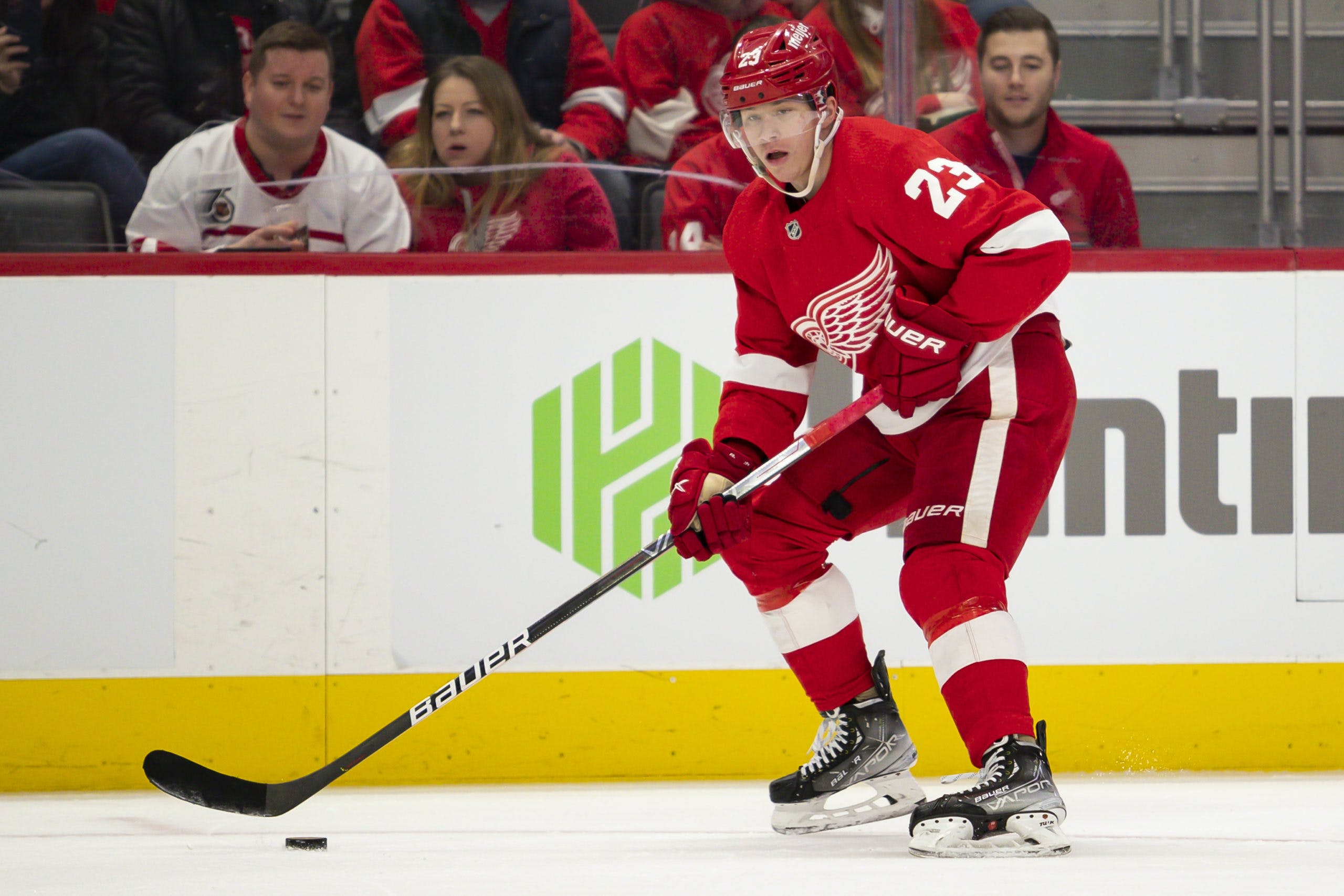 Photo credit: Raj Mehta-USA TODAY Sports
By Mike Gould
10 months ago
Comments
Detroit Red Wings rookie @Lucas Raymond snapped his 14-game goalless drought in his team’s 4–0 shutout win over the Buffalo Sabres on Saturday.
Raymond, 19, entered the contest against Buffalo having last scored in Detroit’s 4–3 shootout victory over the Seattle Kraken on Dec. 1. In the Red Wings’ subsequent 14 games, Raymond amassed eight assists and took 19 shots on goal.
Almost immediately after the puck dropped to kick off the third period of Saturday’s game, @Dylan Larkin and Raymond entered the offensive zone on a partial two-on-one break.
The Detroit captain slid the puck over to a streaking Raymond, who managed to keep his stick on the ice while @Rasmus Dahlin checked him. Raymond got just enough of the puck to push it through Sabres goaltender @Aaron Dell and approximately three inches over the goal line.
Advertisement
Ad
Advertisement
Ad
@Vladislav Namestnikov recorded the secondary helper on Raymond’s 11th goal of the season (and his 32nd point, enough to remain atop the NHL’s rookie scoring race).

The monkey is off his back! Lucas Raymond tallies early in the 3rd to extend the @DetroitRedWings lead! #LGRW pic.twitter.com/tWqx1O1lp2

Raymond also picked up an assist on @Robby Fabbri’s insurance goal late in the opening frame. @Tyler Bertuzzi and @Michael Rasmussen also scored for Detroit, which improved to 17–17–5 on the season with the victory.
Red Wings goaltender Alex Nedeljkovic picked up his first shutout in Detroit colors, stopping all 22 shots he faced in the contest. The 26-year-old rookie (yes, he’s still somehow eligible for the Calder Trophy) now has a .918 save percentage and a 11–10–4 record this season.
Advertisement
Ad
Advertisement
Ad

@Tyler Bertuzzi remained feverishly hot, posting three more points in Saturday’s game (including the winning goal). The 26-year-old forward now has 18 goals and 31 points in just 31 games, including nine goals in his last 10 outings.
One of Bertuzzi’s points came when he sent @Michael Rasmussen in on a breakaway with a stretch pass late in the third period. Rasmussen, 22, had just exited the penalty box and proceeded to beat Dell with a perfect five-hole wrister.

Out of the box, on the board! Michael Rasmussen extends the lead to 4-0! #LGRW pic.twitter.com/FAE16ufU78

Advertisement
Ad
Advertisement
Ad
@Filip Hronek picked up the 100th point of his NHL career with the secondary assist on the play. He now has 20 points (four goals, 16 assists) in 37 games this season.
The Red Wings won’t have to travel far for their next game — and they’ll be facing off against a pretty familiar opponent. These same two teams will meet again for a rematch in Buffalo on Monday at 1:00 p.m. ET.