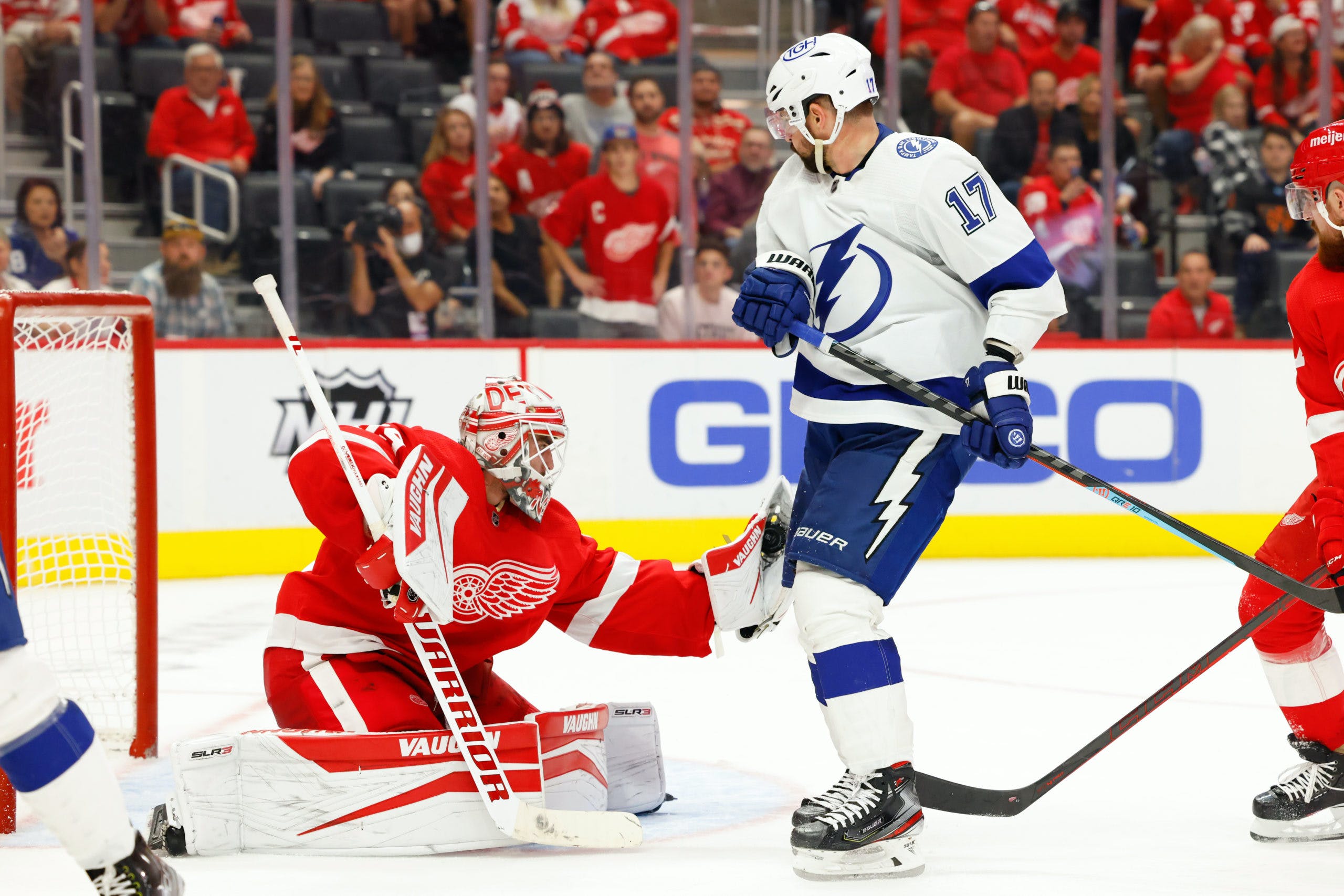 Photo credit: Rick Osentoski-USA TODAY Sports
By Mike Gould
8 months ago
Comments
The Detroit Red Wings could go without defenseman @Marc Staal when they welcome the Tampa Bay Lightning to Little Caesars Arena on Saturday afternoon.
Red Wings head coach Jeff Blashill announced on Friday that Staal is questionable to suit up for the matinee affair (12:30 p.m. ET, Bally Sports Detroit). The 35-year-old defender has three goals and 13 points in 57 games with the Red Wings this season.
Blashill also confirmed that goaltender @Thomas Greiss will miss both of Detroit’s weekend games after suffering an injury in Detroit’s 5–2 loss to the New York Islanders on Thursday. The Red Wings have recalled @Calvin Pickard from the AHL to run tandem with @Alex Nedeljkovic for at least the next two games.
If Staal sits out of Saturday’s game, expect @Olli Juolevi to return to the lineup for the first time since March 19. The 23-year-old Finn does not have a point in 13 games with the Red Wings and Florida Panthers this season.
Advertisement
Ad
Advertisement
Ad
The Red Wings have lost eight of their last 10 games and will be in for a big test against a dominant Lightning team that has already beaten them twice this season. These two teams most recently met in Tampa on March 4, with the Lightning scoring two late goals to eke out a 3–1 victory.
The Lightning (39–18–6) and Red Wings (26–31–7) are separated by 25 points but just one spot in the Atlantic Division standings. The Bolts have fallen into fourth place in the Atlantic; even after its recent slide, Detroit remains in fifth.

Detroit: Newly-acquired defenseman @Jake Walman is already beginning to make an impression in Detroit. The 26-year-old lefty has been rock-solid through two games playing an increased role with the Red Wings and should be a mainstay in the lineup down the stretch (especially if Staal is out for any length of time). Assuming he plays in at least 15 of Detroit’s remaining 18 games, Walman will become a restricted free agent this summer.
Advertisement
Ad
Advertisement
Ad
Tampa Bay: It didn’t take long for @Nick Paul to pick up his first goal in a Lightning sweater. The 27-year-old forward scored 9:39 into the second period of his first game since being acquired by Tampa prior to the 2022 trade deadline, neatly deflecting a @Ross Colton feed past Carolina Hurricanes goaltender @Frederik Andersen. The Hurricanes ultimately defeated the Lightning 3–2 on March 22.

Nick Paul is a goal per game scorer with the @TBLightning. pic.twitter.com/2MpsmNS9tp

Saturday’s game at Little Caesars Arena will be broadcast on Bally Sports Detroit starting at 12:30 p.m. ET. It’ll be sent over the airwaves on WXYT-FM 97.1 “The Ticket” in the Detroit area, as well as on the Red Wings’ official website.