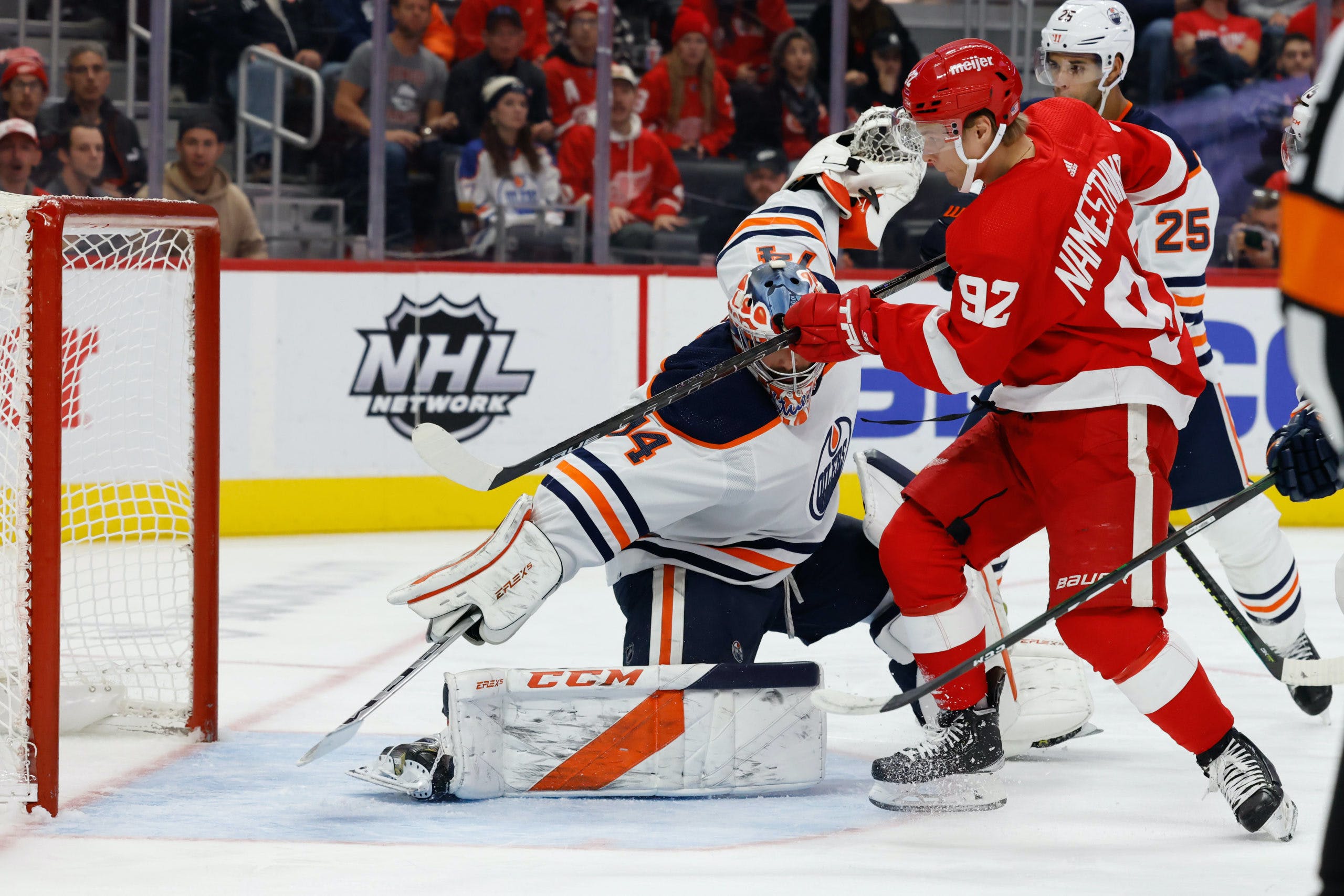 Photo credit: Rick Osentoski-USA TODAY Sports
By Mike Gould
1 year ago
Comments
Detroit Red Wings forward @Vladislav Namesntikov scored two goals on Tuesday to help his team defeat the red-hot Edmonton Oilers by a 4-2 score.
Led by superstars @Connor McDavid and @Leon Draisatil, Edmonton entered Tuesday’s action sitting atop the National Hockey League’s Western Conference with a 9-1-0 record. The Red Wings managed to hold McDavid and Draisaitl to just one point in the game, combined.
Namestnikov opened the scoring for Detroit at the 14:03 mark of the first period, taking a pass from former Oiler @Sam Gagner — playing in his 900th NHL game — and cutting past @Tyson Barrie with a power move before depositing the puck past goaltender @Stuart Skinner.
Gagner registered the lone assist on Namestnikov’s sixth goal of the season. Here’s the video, as posted to Twitter by Bally Sports Detroit:
Advertisement
Ad
Advertisement
Ad

It's the 6th goal of the season for @Vladdy18 and the assist goes to @89SGagner, who is playing in his 900th game. #LGRW pic.twitter.com/kyiHqlWKeM

Namestnikov doubled the Red Wings’ lead just 6:43 into the second period, banging home a rebound at the foot of Skinner’s crease.
The puck arrived at the vicinity of the net off an initial point shot by Red Wings defenseman @Filip Hronek, which was tipped en route by @Michael Rasmussen. Skinner made the initial save but couldn’t corral the puck, allowing Namestnikov to slam it home.
Namestnikov had eight goals in 53 games with the Red Wings last season. This year, he has seven in 14.

One more and @Vladdy18 ties his total from last season. @hronek_filip and @mrasmussen16 with the assists. #LGRW pic.twitter.com/8sKzeYl6jA

Advertisement
Ad
Advertisement
Ad
@Dylan Larkin and @Moritz Seider also scored for Detroit, which improved to 7-5-2 with the win. The Oilers fell to 9-2-0 with the loss, receiving goals from McDavid and @Jesse Puljujarvi.
@Alex Nedeljkovic stopped 31 of 33 shots for his third win as a Red Wing. His team will return to action on Nov. 11 for a home clash against the Washington Capitals at 7:30 p.m. ET.