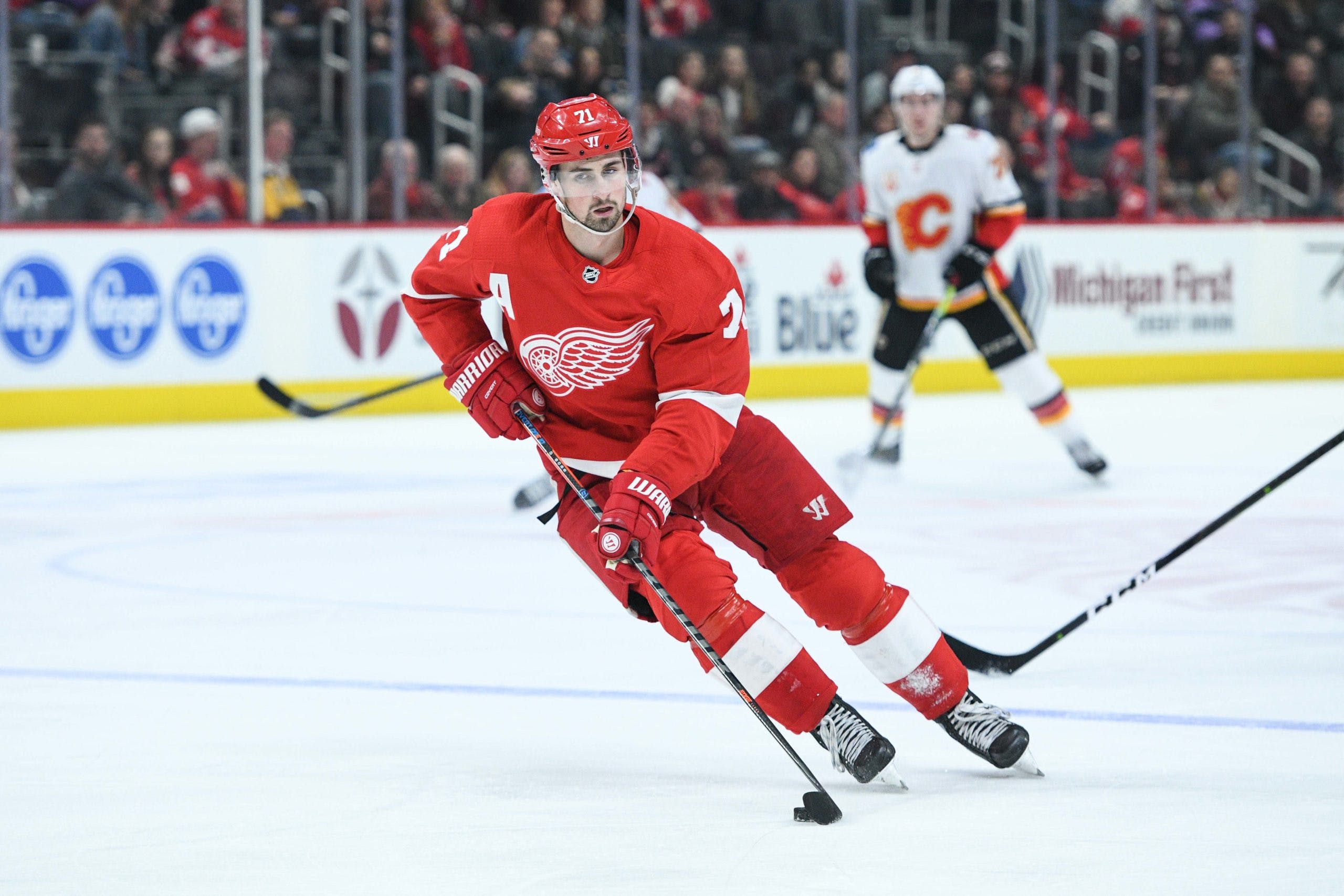 Photo credit: Tim Fuller-USA TODAY Sports
By Mike Gould
1 year ago
Comments
The Detroit Red Wings and Calgary Flames will meet at Little Caesars Arena on Thursday for their first meeting since Feb. 23, 2020.
In their last matchup, the Flames won 4-2 on the strength of two goals by @Andrew Mangiapane. @Johnny Gaudreau and @Sean Monahan also scored for Calgary; @Dylan Larkin and @Tyler Bertuzzi tallied for the Red Wings.
Thursday’s game will be the Flames’ first regular-season contest in the United States since Mar. 1, 2020, when they defeated the Florida Panthers 3-0.
Detroit will aim to continue its three-game point streak with a win on Thursday. The Red Wings currently own a 2-0-1 record and have won their last two games; the Flames are 0-1-1 and have already allowed eight goals.

Detroit coach Jeff Blashill went with these lines in Wednesday’s practice:
Advertisement
Ad
Advertisement
Ad
@Tyler Bertuzzi – @Dylan Larkin – @Lucas Raymond
@Robby Fabbri – @Pius Suter – @Filip Zadina
@Vladislav Namestnikov – @Michael Rasmussen – @Adam Erne
@Givani Smith – @Mitchell Stephens – @Sam Gagner
@Danny DeKeyser – @Filip Hronek
@Nick Leddy – @Moritz Seider
@Marc Staal – @Gustav Lindstrom
Unsurprisingly, it doesn’t look like the Wings will be making any changes after their commanding 4-1 win over Columbus on Tuesday.
Expect @Alex Nedeljkovic to get the start in goal for Detroit on Thursday. @Thomas Greiss was excellent in his appearances against Vancouver and Columbus but the Wings will want to give Nedeljkovic an opportunity to get on track against a struggling opponent.

Detroit: Who among us would have predicted @Tyler Bertuzzi would be the NHL’s early goal-scoring leader? The 26-year-old winger is currently tied with Los Angeles Kings center @Anze Kopitar for the league lead with five goals in three games. Bertuzzi will face a Canadian opponent for the second time of 2021–22 on Thursday; of course, owing to his unvaccinated status, he’ll only be able to play against the NHL’s seven international opponents inside the friendly confines of Little Caesars Arena.
Advertisement
Ad
Advertisement
Ad
Calgary: The Flames need more out of @Sean Monahan. The 27-year-old center has yet to score his first point of the 2021–22 season; last year, he managed just 10 goals and 18 assists in 50 games. Monahan has dealt with a ton of injuries and has undergone at least six surgeries over the course of his nine-season NHL career. In 593 games with the Flames, Monahan has 204 goals and 439 points.

Thursday’s Wings/Flames game will be broadcast on Bally Sports Detroit and, for Calgary viewers, Sportsnet West. It’ll be sent over the airwaves on WXVT-FM 97.1 “The Ticket” in the Detroit area, as well as on the Red Wings’ official website.