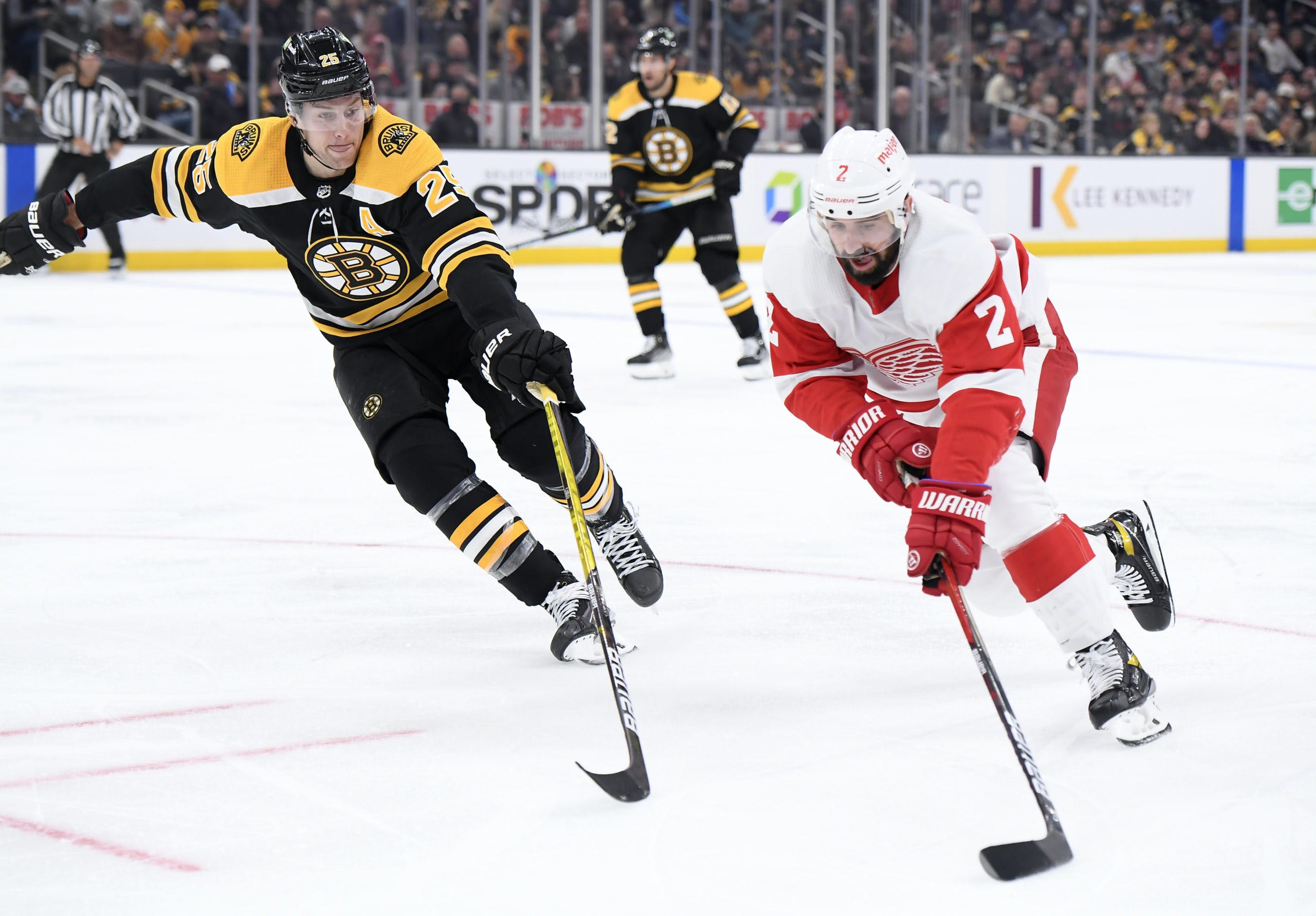 Photo credit: Bob DeChiara-USA TODAY Sports
By Mike Gould
1 year ago
Comments
The Detroit Red Wings will go for a third consecutive win when they take on the Boston Bruins at 7:00 p.m. ET on Tuesday.
@Lucas Raymond scored in overtime against the Buffalo Sabres on Nov. 20 to push the Red Wings back above .500 for the season. Detroit (10–9–3) currently ranks fourth in the Atlantic Division — one spot ahead of the Bruins — with 23 points in 22 contests. Boston (11–7–0) sits just one point back of Detroit despite having played four fewer games.
During the Bruins’ 3–2 win over the Vancouver Canucks on Sunday, leading scorer @Brad Marchand slew-footed opposing defenseman @Oliver Ekman-Larsson. The NHL’s Department of Player Safety took notice, announcing on Monday it had suspended Marchand for three games. The 33-year-old winger will begin serving his ban during Tuesday’s contest.
Advertisement
Ad
Advertisement
Ad
Red Wings defenseman @Filip Hronek is questionable for Tuesday’s game with a non-COVID illness. While Hronek did not participate in Monday’s practice, Red Wings head coach Jeff Blashill told reporters he expects the 24-year-old rearguard to be available to play in Boston.
The Bruins and Red Wings have already met once this season, with Boston captain @Patrice Bergeron scoring four goals in a 5–1 win back on Nov. 4.

Detroit: The Red Wings shifted @Givani Smith onto the second line in Monday’s practice, relocating Filip Zadina down into Smith’s old spot on the fourth line. While the move might be more of a demotion for Zadina than a reward for Smith, it could nevertheless translate into a long-term arrangement if the 2016 second-round pick is able to mesh with his new linemates. Smith has long been a capable AHL producer but has just nine points in 53 career NHL games.
Boston: Tuesday’s game will likely be the first for Bruins winger @Jake DeBrusk since news of his trade request became public on Monday. The 25-year-old winger sat out of Boston’s win over Vancouver as a healthy scratch. With Marchand out of the lineup, DeBrusk could now be in line for an opportunity to prove his worth — and potentially raise his trade value — in a significant role.
Advertisement
Ad
Advertisement
Ad

Tuesday’s Red Wings game will be broadcast on Bally Sports Detroit starting at 7:00 p.m. ET. It’ll be sent over the airwaves on WXVT-FM 97.1 “The Ticket” in the Detroit area, as well as on the Red Wings’ official website.