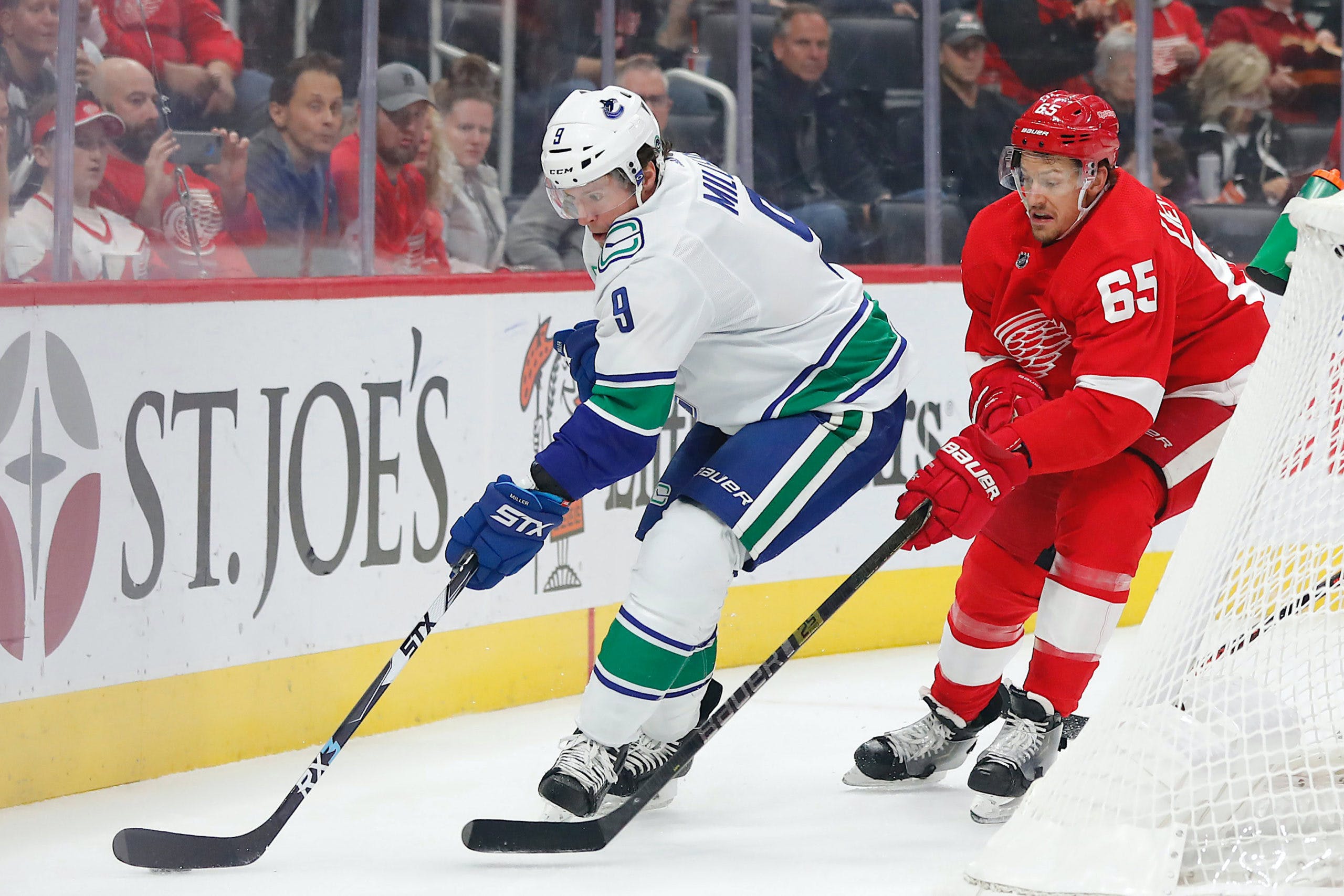 Photo credit: Rick Osentoski-USA TODAY Sports
By Mike Gould
1 year ago
Comments
It’ll be hard for Saturday’s game to live up to the spectacle that was the Detroit Red Wings’ season opener against the Tampa Bay Lightning.
Detroit fell in overtime Thursday by a 7-6 score. It truly was a game with everything, including four goals from @Tyler Bertuzzi, two blown three-goal leads for Detroit, and a controversial incident involving @Dylan Larkin and @Mathieu Joseph that led to a one-game suspension for the Wings’ captain.
Without Larkin in the lineup, the Wings will host Quinn Hughes and the Vancouver Canucks on Saturday at 7:00 p.m. ET. Here’s what you need to know before the game.

Detroit: Elevated to the No. 1 center position in Larkin’s absence, look for Robby Fabbri to make the most of his increased opportunity on Saturday. He meshed well with Raymond during the pre-season and connected with him again on Thursday to set up Tyler Bertuzzi’s third goal of the night.

Tyler Bertuzzi completes the hat trick with this goal coming on the 4-on-3 power play. Robby Fabbri and Lucas Raymond get the assists. First NHL point for Raymond. #LGRW pic.twitter.com/ZyEjEhg1OF

Vancouver: Early returns have been promising for new Canucks defenseman Oliver Ekman-Larsson, acquired from the Arizona Coyotes in a blockbuster deal this past summer. The 30-year-old rearguard had shown signs of decline at 5-on-5 play in his final few campaigns with the ‘Yotes but has acquitted himself nicely thus far on Vancouver’s top pairing with Myers.
Advertisement
Ad
Advertisement
Ad

You’ll be able to watch this game on Bally Sports Detroit. It’ll be broadcast over the airwaves on WXVT-FM 97.1 “The Ticket” in the Detroit area, as well as on the Red Wings’ official website.
Canadian readers: Sportsnet Pacific will be carrying this game. Once again, it’s scheduled to start at 7:00 p.m. ET.

After signing up for a free account, we’re going to give you a bunch of boxes with player names and you’re going to pick a name from each box until you’ve put together a super crew that you think can contend for a NationDrafts championship. Seems easy, right? It is easy and that’s not just because you’re wicked smaht. Sign up for FREE right here.