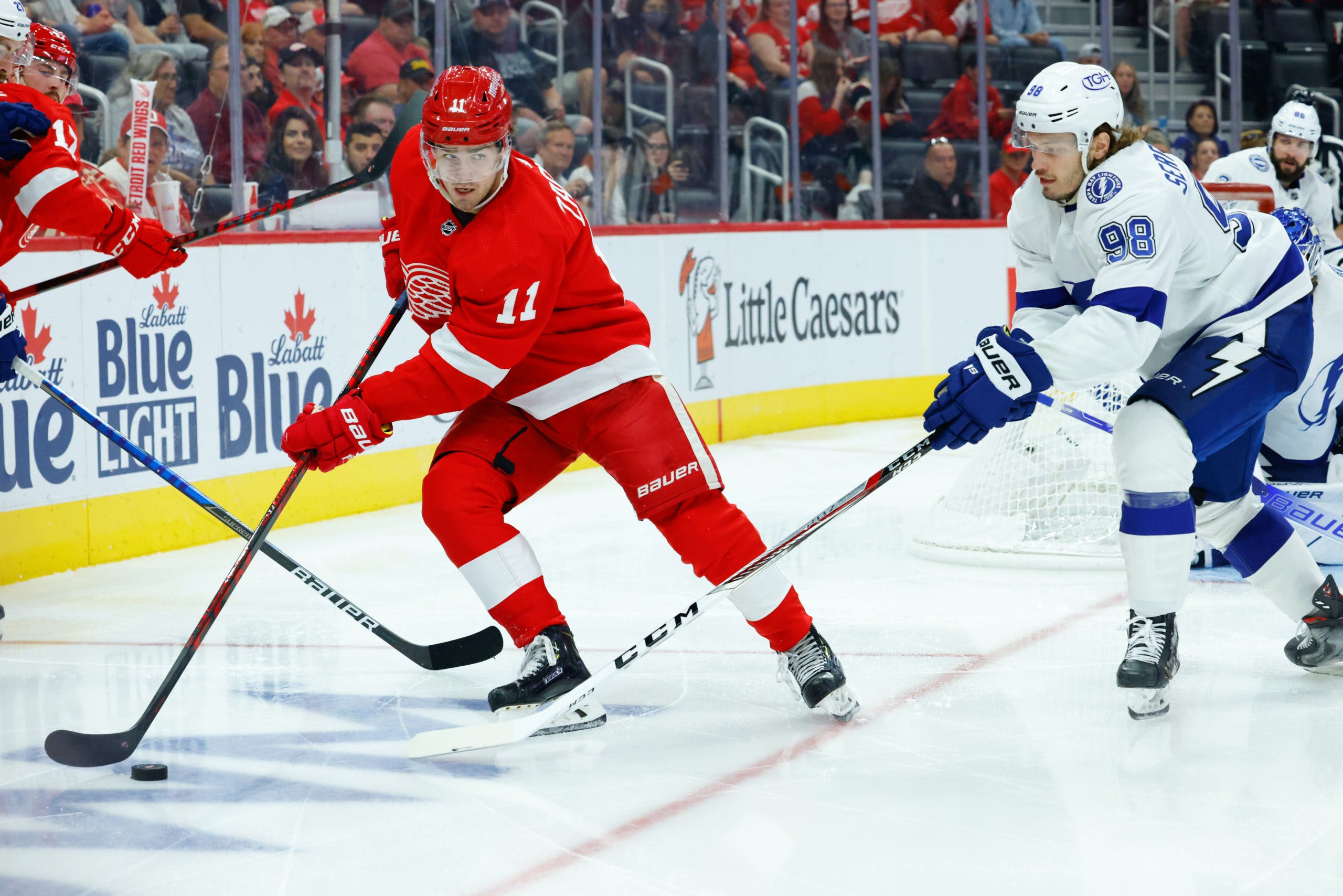 Photo credit: Rick Osentoski-USA TODAY Sports
By Mike Gould
8 months ago
Comments
You’d be forgiven if you’ve forgotten the last meeting between the Detroit Red Wings and the Tampa Bay Lightning. It was nearly five months ago, after all.
These two teams last faced each other at Little Caesars Arena way back on Oct. 14, 2021. Playing in their season-opening game, the Red Wings carried a 6–3 lead into the final seven minutes of regulation; the Bolts proceeded to score four answered goals and took the game in overtime by a 7–6 score.
If you’ve chosen to repress the part about the Red Wings blowing a late three-goal lead, you might instead remember it as the game where @Tyler Bertuzzi scored four goals.
As expected, the Lightning remain one of the National Hockey League’s top teams after capturing the last two Stanley Cups. They have a 7–2–1 record in their last 10 games and rank second in the Atlantic Division with a 35–12–6 record in 2021–22.
Advertisement
Ad
Advertisement
Ad
Detroit is in the midst of a relatively middling season, albeit one significantly improved from recent years. Bolstered by the play of rookies @Moritz Seider, @Lucas Raymond, and @Alex Nedeljkovic, the Red Wings rank fifth in the Atlantic — and 13 points out of a playoff spot — with a 24–24–6 record.
The Red Wings most recently took on the high-flying Carolina Hurricanes on Mar. 1 and managed to defeat them in overtime by a 4–3 score. @Dylan Larkin tallied late in the third period to tie the game before Raymond won it for the Red Wings in extra time.

Detroit: Like Red Wings general manager Steve Yzerman, @Adam Erne is a former member of the Tampa Bay Lightning. It’s been a tough third season in Detroit for Erne, with the 26-year-old forward having scored just once since Nov. 24, 2021. During the 2020–21 campaign, Erne managed 11 goals in just 45 contests; this year, he has four goals in 53 games.
Tampa Bay: @Nikita Kucherov was held off the board entirely during Tampa’s 5–1 loss to the Pittsburgh Penguins on Thursday, ending his own personal streak of recording exactly one goal and one assist in four consecutive games. The 28-year-old winger has provided a huge boost to the Bolts since making his return from injury on Jan. 6, recording nine goals and 22 points in 15 contests.

Friday’s game at Amalie Arena will be broadcast on Bally Sports Detroit starting at 7:00 p.m. ET. It’ll be sent over the airwaves on WXYT-FM 97.1 “The Ticket” in the Detroit area, as well as on the Red Wings’ official website.
Advertisement
Ad
Advertisement
Ad