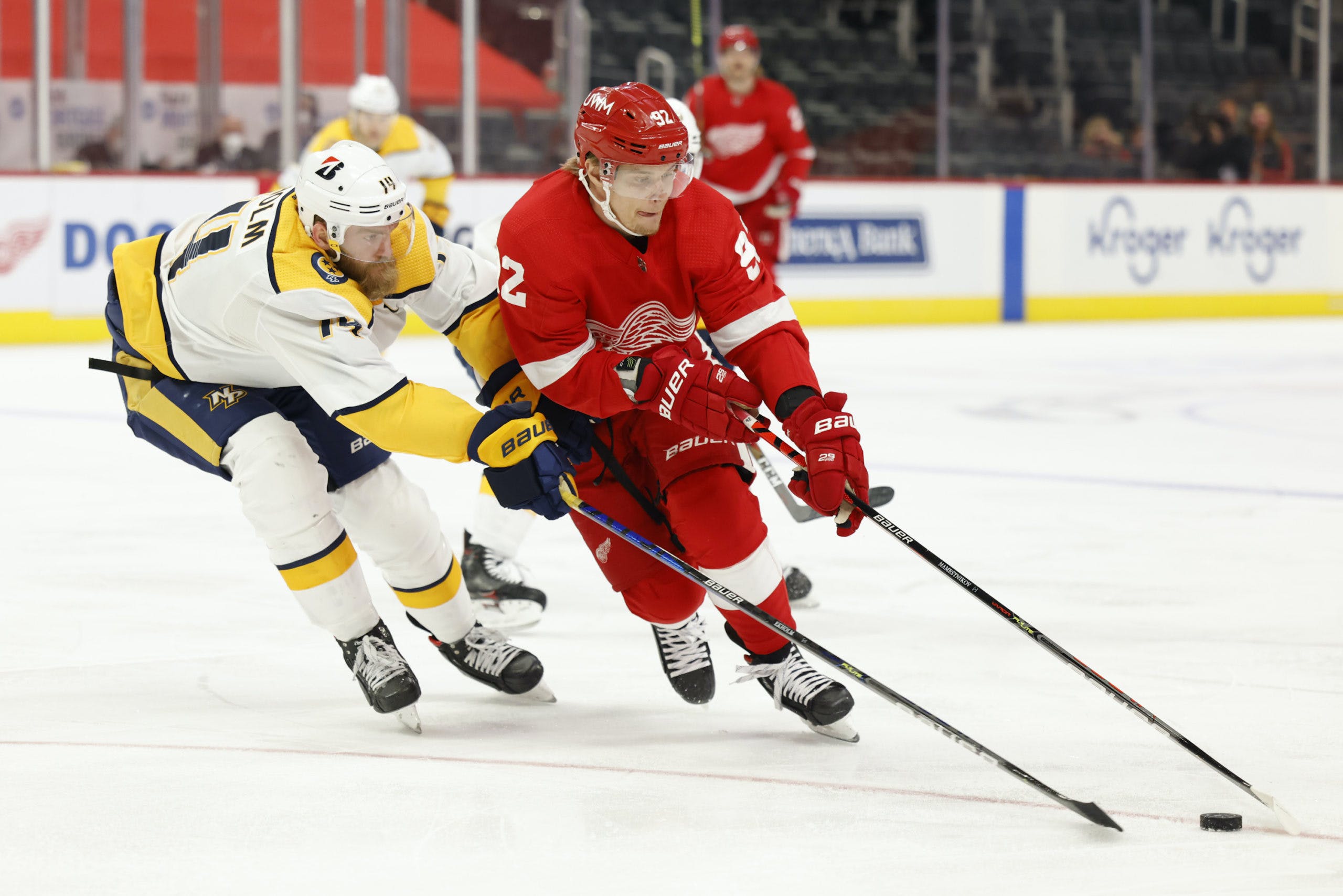 Photo credit: Rick Osentoski-USA TODAY Sports
By Mike Gould
11 months ago
Comments
The Detroit Red Wings will look to build upon their current five-game winning streak — a season-best mark — when they play host to the Nashville Predators on Tuesday evening.
Detroit and Nashville boast nearly identical records through the first two months of the season. The Red Wings currently rank fourth in the Atlantic Division at 13–9–3; their Tennessee counterparts sit sixth in the Central with a 13–10–1 line.
The Red Wings and Predators temporarily competed against each other last season as part of the temporary “Discover Central” division. Detroit managed a measly 2–5–1 record against Nashville in 2020–21, scoring just 15 goals in their eight meetings.
Already missing @Tyler Bertuzzi (COVID protocol), the Red Wings will likely be without the services of @Gustav Lindstrom
(lower-body injury) and @Marc Staal (COVID protocol) against Nashville. Lindstrom suffered his injury during Detroit’s 4–3 overtime win against the New York Islanders on Dec. 4.
Advertisement
Ad
Advertisement
Ad
The Predators are in the midst of an unusual streak. They have alternated between winning one game and losing the next in their last eight contests, with this up-and-down stretch dating back to their 6–3 loss in Montreal on Nov. 20. Nashville is coming off a 4–3 win against the Canadiens on Saturday, so who knows — maybe it’s their turn to lose a game.

Detroit: What more is there to say about @Moritz Seider? Forget his Calder Trophy candidacy — it’s starting to look like he should get some Norris votes as one of the best defensemen in the entire National Hockey League. He sure looked the part against the Islanders on Saturday, especially when he uncorked a ferocious one-timer in overtime for the game-winning goal.

Who should win the Norris trophy?

Nashville: It’s been fun to watch @Matt Duchene bounce back after his miserable 2020–21 season. The 30-year-old centre scored just 13 points in 34 games last season; this year, he already has 13 goals in just 24 contests. Duchene is still quite a ways away from living up to his contract, which has four years at $8 million remaining after this one, but he certainly looks like a first-line forward right now.
Advertisement
Ad
Advertisement
Ad

Tuesday’s Red Wings game will be broadcast on Hulu starting at 7:00 p.m. ET. It’ll be sent over the airwaves on WXVT-FM 97.1 “The Ticket” in the Detroit area, as well as on the Red Wings’ official website.