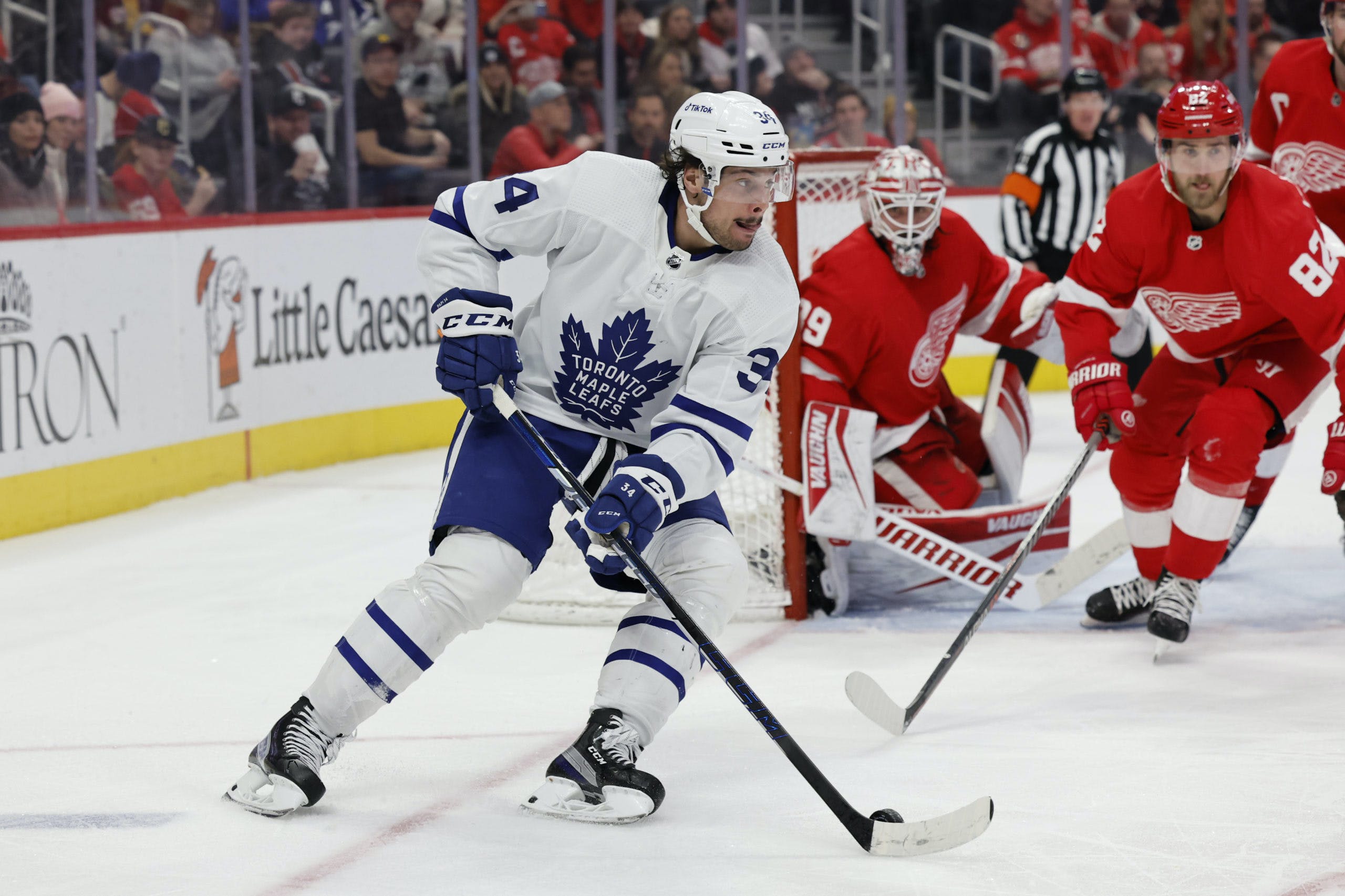 Photo credit: Rick Osentoski-USA TODAY Sports
By Mike Gould
9 months ago
Comments
The Detroit Red Wings (23–23–6) will be handed a tough assignment on Saturday night when they host the Toronto Maple Leafs (33–14–4) at Little Caesars Arena.
Leafs center @Auston Matthews has forced himself into the forefront of the Hart Trophy conversation with a dominant stretch of play in recent weeks.
The 24-year-old forward has become a nearly automatic goal-scorer, with his impressive game-tying marker against the Minnesota Wild on Thursday prompting Sportsnet’s Chris Johnston to post the following tweet:

Auston Matthews has 76 goals in his last 100 games.

Impressive, hey?
And ultimately inaccurate. Less than an hour later, Johnston was forced to correct the record when Matthews scored the eventual game-winner against Minnesota:

Advertisement
Ad
Advertisement
Ad
When you’re hot, you’re hot. Matthews now leads the NHL with 36 goals in 48 games this season and is on pace to become only the fourth player ever to post a 50-goal season while wearing a Maple Leafs sweater. (Rick Vaive, Gary Leeman, and Dave Andreychuk are the others).
Interestingly enough, Matthews does not have a goal in two games against the Red Wings this season. While his Leafs are 2–0–0 against Detroit, Matthews has zero goals and a pair of helpers to go along with a minus-one rating in the season series.
The Red Wings and Maple Leafs last met up in Detroit on Jan. 29, with Toronto using a @Michael Bunting hat trick to come back from a 4–2 deficit to win 7–4.
Red Wings captain @Dylan Larkin scored twice in that game. Larkin missed Thursday’s practice for a maintenance day but returned to the ice on Friday, indicating he’s likely good to go against the Leafs.
Advertisement
Ad
Advertisement
Ad

Detroit: The last seconds might be ticking down on @Nick Leddy‘s tenure with the Red Wings. The 30-year-old defenseman hasn’t lived up to expectations in Detroit and will likely be moved for the best possible return ahead of next month’s trade deadline. Acquired to mentor @Moritz Seider and add some offense from the blue line, Leddy has scored just once in 47 games while struggling to find his defensive game.
Toronto: Leafs captain @John Tavares has had a tough February. The 31-year-old centre hasn’t scored a goal since Jan. 29, with 11 scoreless games having passed in that span. Tavares still has eight assists in February but has seen his deployment decrease to the point where he’s logged 15:30 or less in four of his last six games. When @Auston Matthews’ pace inevitably slows, the Leafs will need Tavares to pick up some of the slack.
Advertisement
Ad
Advertisement
Ad

Saturday’s game at Little Caesars Arena will be broadcast on Bally Sports Detroit (and CBC in Canada) starting at 7:30 p.m. ET. It’ll be sent over the airwaves on WXYT-FM 97.1 “The Ticket” in the Detroit area, as well as on the Red Wings’ official website.