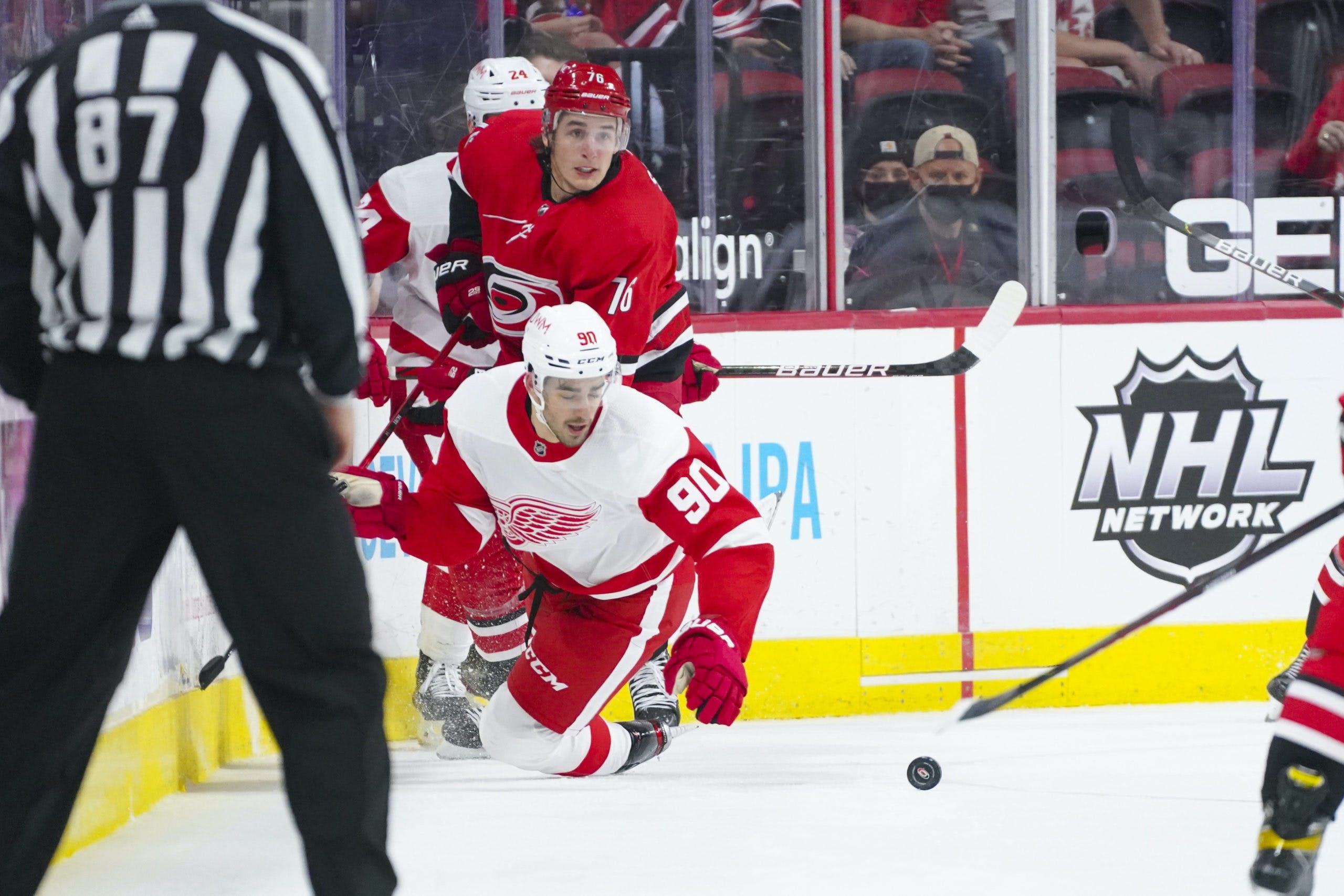 Photo credit: James Guillory-USA TODAY Sports
By Mike Gould
11 months ago
Comments
At this point, it’s still not for certain whether Thursday’s game between the Detroit Red Wings and Carolina Hurricanes will even take place.
The Hurricanes — like so many teams around the league — are in the midst of a COVID-19 outbreak. @Jordan Staal, @Sebastian Aho, @Andrei Svechnikov, @Seth Jarvis, @Ian Cole, and @Steven Lorentz have all been placed in the National Hockey League’s COVID-19 protocols and will be unavailable for Thursday’s contest.
To offset their losses, the Hurricanes recalled forwards @Jack Drury, @Andrew Poturalski, and @Stefan Noesen on Thursday from the Chicago Wolves of the American Hockey League. Drury will likely make his NHL debut against Detroit.
The Hurricanes are currently in the midst of testing all their players and support staff for the virus. If all the tests come back negative, it’ll be game on in Carolina; if not, the status of the game might be in doubt.
Advertisement
Ad
Advertisement
Ad
Detroit will be without forwards @Robby Fabbri and @Michael Rasmussen on Thursday, with both players also currently in COVID-19 protocol. Rasmussen scored the winning goal in Detroit’s 2–1 victory over the New York Islanders two nights ago.
At their strongest, the Hurricanes are one of the top teams in the NHL. Their 17–9–1 record and .722 points percentage currently lead the entire league.
This will be the first of three meetings between Carolina and Detroit this season. They’ll play again in Detroit on Mar. 1 before returning to Carolina on Apr. 14 for the rubber match.

Detroit: Welcome back to Carolina, @Alex Nedeljkovic! The 25-year-old goaltender was a finalist for the Calder Trophy in his only full season with the Hurricanes last year, posting a 15–5–3 record and a .932 save percentage in 23 games. Nedeljkovic spent seven seasons in the Hurricanes organization after being drafted by the club in the second round of the 2014 NHL Entry Draft; the Hurricanes traded him to Detroit this past July in exchange for the pending UFA rights to @Jonathan Bernier and a 2021 third-round pick.
Carolina: While the Hurricanes may have come out on the wrong side of the Nedeljkovic trade, they look to have pulled off a major coup by acquiring @Ethan Bear from the Edmonton Oilers in the offseason. The 24-year-old defenceman has been a positive two-way presence in Carolina and has six points in his first 20 contests with his new team.
Advertisement
Ad
Advertisement
Ad

Not great so far for the Oilers. pic.twitter.com/kU1qsha62g

Thursday’s Red Wings game will be broadcast on Bally Sports Detroit starting at 7:00 p.m. ET. It’ll be sent over the airwaves on WXVT-FM 97.1 “The Ticket” in the Detroit area, as well as on the Red Wings’ official website.