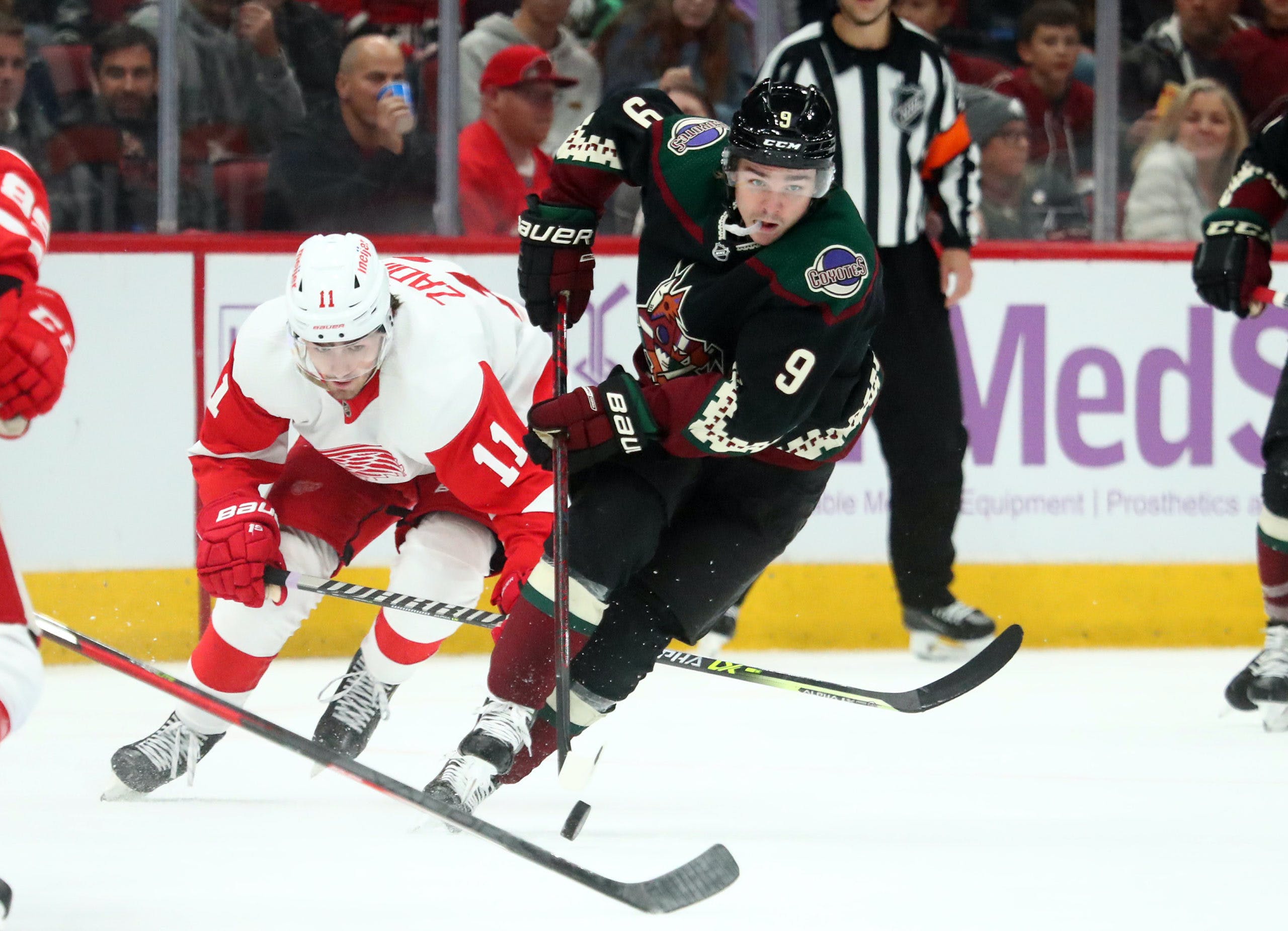 Photo credit: Mark J. Rebilas-USA TODAY Sports
By Mike Gould
8 months ago
Comments
The Detroit Red Wings will return to action at Little Caesars Arena on Tuesday to wrap up their season series against the Arizona Coyotes.
Detroit last faced off against Arizona at Gila River Arena back on Nov. 20, 2021, falling 2–1 in overtime off a goal by @Clayton Keller.
Forward @Jakub Vrana could make his season debut for the Red Wings on Tuesday after sitting out the entire 2021–22 campaign to date while recovering from shoulder surgery. The 26-year-old winger skated alongside @Robby Fabbri and @Pius Suter on the Red Wings’ second line during Monday’s practice.
Vrana returning would be a big boost to a Red Wings team going up against the surprisingly pesky Coyotes, who have won back-to-back games (including a 2–1 victory over the Western Conference-leading Colorado Avalanche on Mar. 3).
Advertisement
Ad
Advertisement
Ad
Coyotes forward @Nick Schmaltz was named the National Hockey League’s second star of the week ending Mar. 6 after scoring three goals and five assists in two games, including a franchise-record seven points (two goals, five assists) in Arizona’s 8–5 win over the Ottawa Senators on Mar. 5.
Schmaltz became just the fourth NHL player to score seven points in a single game since 2000, joining Jaromir Jagr, Daniel Alfredsson, and Sam Gagner in that category.

The Red Wings have lost back-to-back games — both on the road against very good Florida teams — since taking down the Carolina Hurricanes in overtime on Mar. 1.
Detroit currently sits in fifth place in the Atlantic Division with a 24–26–6 record. Arizona ranks last in the Central at 16–35–4.
Advertisement
Ad
Advertisement
Ad

Detroit: It’s been a nice past few weeks for @Robby Fabbri, who has seven points in his last nine games and goals in each of his last two. The 26-year-old winger has been a fixture in the Red Wings’ middle-six forward group all season long and is the only player on the team under contract through 2025.

Robby Fabbri scores his 15th of the season and Moritz Seider extends his point streak to eight games, 1-1! #LGRW pic.twitter.com/ACcQMto1TZ

Arizona: Back in 2018, the Coyotes took center @Barrett Hayton one spot ahead of where @Filip Zadina ultimately went to Detroit. While Hayton hasn’t yet panned out the way former Coyotes general manager John Chayka may have envisioned, he’s still very young for an NHL forward (he won’t turn 22 until June) and has shown flashes of the skill that made him a top-five draft selection.
Advertisement
Ad
Advertisement
Ad

Tuesday’s game at Little Caesars Arena will be broadcast on Hulu starting at 7:30 p.m. ET. It’ll be sent over the airwaves on WXYT-FM 97.1 “The Ticket” in the Detroit area, as well as on the Red Wings’ official website.