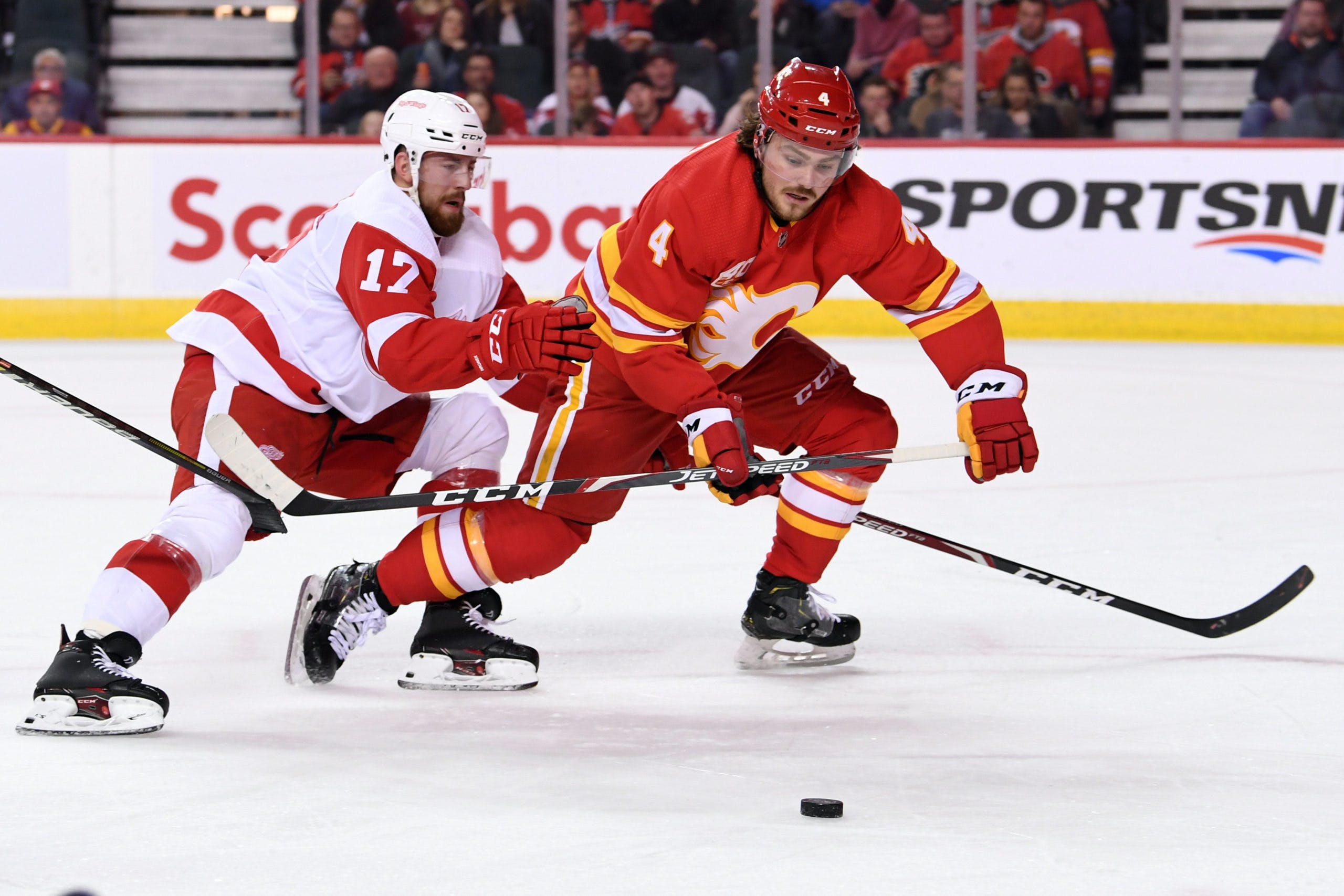 Photo credit: Candice Ward-USA TODAY Sports
By Mike Gould
8 months ago
Comments
The Detroit Red Wings have lost four consecutive games. They’ve been outscored 24–10 in those contests, with nine of those goals against coming in an embarrassing loss to the lottery-bound Arizona Coyotes on Mar. 8.
On the other hand, the Calgary Flames have points in 18 of their last 21 games and currently lead the Pacific Division by a comfortable five-point margin. The Flames (35–15–7) will play host to the Red Wings (24–27–7) at the Scotiabank Saddledome on Monday evening.
Calgary’s plus-61 goal differential ranks behind only the Florida Panthers (plus-73) in the entire National Hockey League. The Flames defeated the Red Wings by a 3–0 score when the two teams met at Little Caesars Arena back on Oct. 21, 2021.
Detroit will be without the services of @Robby Fabbri in Saturday’s game and for the rest of the 2021–22 season. The club announced on Friday that Fabbri has suffered a suspected torn ACL and is likely done for the year.
Advertisement
Ad
Advertisement
Ad
Also on Friday, the Red Wings recalled forward @Taro Hirose from the American Hockey League. The 25-year-old forward played at Calgary’s Edge School as a teenager before moving on to the BCHL’s Salmon Arm Silverbacks, the NCAA’s Michigan State Spartans, and (finally) the Red Wings organization.
At this point, it’s unclear whether Hirose will draw into the Red Wings’ lineup for Saturday’s game. Furthermore, @Tyler Bertuzzi will be unable to play in Calgary due to his unvaccinated status. Expect to see some shuffled forward lines in Calgary as the Red Wings try to find successful new combinations.

Detroit: When was the last time @Sam Gagner played on the second line? The 32-year-old forward used to be a top-six mainstay during his first stint with the Edmonton Oilers but has primarily been relegated to depth duty in Detroit. Gagner has six goals and 21 points in 58 games with the Red Wings this season.
Calgary: @Sean Monahan has been mired in a tough stretch lately. The 27-year-old centre has gone his last eight games without a point and has just eight goals in 57 contests this season. A three-time 30-goal scorer, Monahan is on pace for just 12 goals in 2021–22; his last tally came in the Flames’ 3–1 win over the Winnipeg Jets back on Feb. 21.

Saturday’s game at the Scotiabank Saddledome will be broadcast on Bally Sports Detroit starting at 7:00 p.m. ET. It’ll be sent over the airwaves on WXYT-FM 97.1 “The Ticket” in the Detroit area, as well as on the Red Wings’ official website.