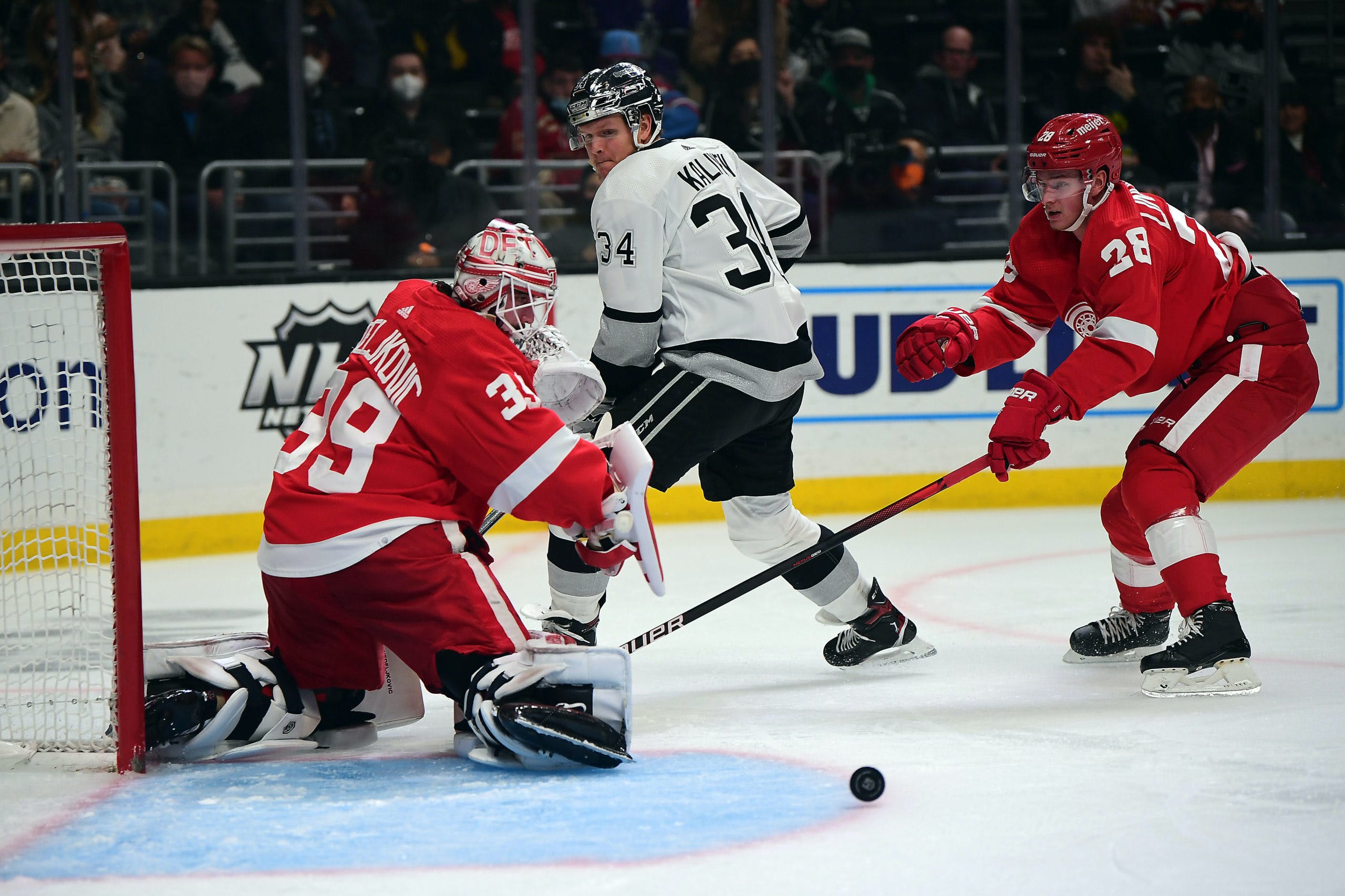 Photo credit: Gary A. Vasquez-USA TODAY Sports
By Mike Gould
10 months ago
Comments
@Andreas Athanasiou will play his first game as a visitor at Little Caesars Arena on Wednesday when his Los Angeles Kings take on the Detroit Red Wings.
The Wings dealt Athanasiou to the Edmonton Oilers during the 2019–20 season, receiving two second-round draft picks and forward @Sam Gagner in return. The Oilers never faced the Red Wings during Athanasiou’s tenure with the team, which lasted just 13 games.
Athanasiou joined the Kings prior to the 2020–21 season. Los Angeles exclusively played against West Division teams that year due to the COVID-19 pandemic, delaying Athanasiou’s Red Wings reunion by another season.
The speedy 27-year-old forward has 14 goals and 31 points in 61 games since signing with the Kings, including eight points (four goals, four assists) in 14 contests this year.
Advertisement
Ad
Advertisement
Ad
In 294 career games over parts of five seasons with the Red Wings, Athanasiou amassed 83 goals and 154 points. 30 of those goals came in 76 games with the team during the 2018–19 season.
Wednesday’s game will be the second and final meeting between the Red Wings and Kings in 2021–22. Detroit fell by a 4–0 score in Los Angeles back on Jan. 8, with Kings goaltender @Cal Petersen making 21 saves for his first (and, to this day, only) shutout of the season.
The Kings have points in each of their last five games, having gone 3–0–2 over that stretch (which dates back to Jan. 23 in New Jersey).
Detroit is coming off a dramatic 2–1 overtime win over the Anaheim Ducks on Monday. @Jordan Oesterle scored the game-winner in the extra frame after @Dylan Larkin netted the Wings’ lone goal in regulation.
Advertisement
Ad
Advertisement
Ad

Detroit: With @Nick Leddy confirmed to be unavailable Wednesday’s game, Danny DeKeyser should return to the lineup to play alongside @Gustav Lindstrom on the Red Wings’ bottom pair. DeKeyser, 31, has struggled mightily alongside @Moritz Seider this season. Perhaps he’ll be able to find a niche playing in a lesser role next to a quietly steady partner in Lindstrom.
Los Angeles: After defying typical aging curves for the past few seasons, it looks like time might finally be catching up with @Dustin Brown. The Kings’ former captain has just six goals and 20 points in 41 games this year after amassing 84 goals and 178 points in 268 games over the last four seasons. The 37-year-old forward is set to become an unrestricted free agent when the eight-year, $5.875 million-AAV contract he signed in 2013 expires this summer.
Advertisement
Ad
Advertisement
Ad

Wednesday’s game in Detroit will be broadcast on Bally Sports Detroit starting at 7:30 p.m. ET. It’ll be sent over the airwaves on WXYT-FM 97.1 “The Ticket” in the Detroit area, as well as on the Red Wings’ official website.