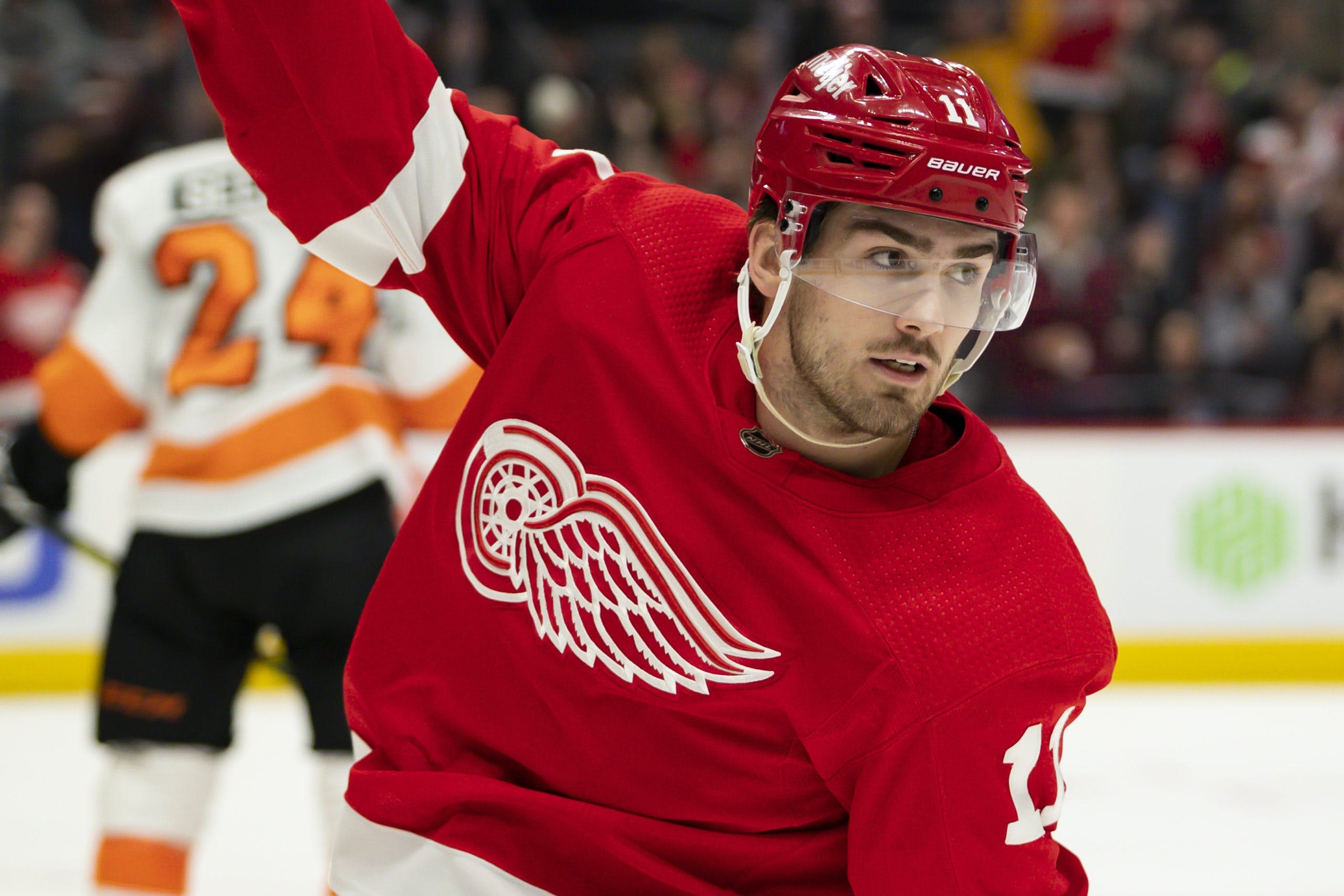 By Mike Gould
9 months ago
The Detroit Red Wings will have some decisions to make this off-season about their pending restricted free agents.
Six players currently under contract with the Red Wings can become restricted free agents this summer. If tendered qualifying offers, three of them would subsequently be able to file for salary arbitration.
Of course, the Red Wings are not obligated to present qualifying offers to each of their RFAs. If any of the following six players do not receive QOs, they’ll become unrestricted free agents (UFAs) eligible to sign with any National Hockey League team.
Here’s a look at how each of the Red Wings’ six pending RFAs currently stand in the organization in advance of a critical summer for both them and the team.

This is the big one.
The only way the Red Wings won’t tender Zadina a qualifying offer is if they trade him first. Otherwise, the 22-year-old forward is a shoo-in to remain with the club beyond this season — even considering his disappointing production in his second full NHL campaign.
The Red Wings used the sixth-overall pick in 2018 to add Zadina to their organization. He has just six goals and 15 points in 49 games this season but hasn’t looked out of place on Detroit’s top line. As we’ve previously stated, the Red Wings can afford to remain patient with him.
This summer, Zadina will require a one-year, two-way qualifying offer worth $874,125 in the NHL. Expect him to decline the offer and eventually sign a short-term contract at an average annual value (AAV) somewhere between $1.25 million and $1.75 million.

Stephens’ case is relatively unique among the players on this list.
The 25-year-old forward hasn’t played since suffering a lower-body injury in a game against the Montreal Canadiens way back on Nov. 13. In 16 games with the Red Wings this season, Stephens has four assists.
Stephens played in 45 games (regular season and playoffs) as a member of the 2019–20 Tampa Bay Lightning, earning a spot on the Stanley Cup along the way, but has since appeared in just 23 contests over the last two seasons.
If Stephens does not play 12 more NHL games this season, he’ll become a “Group 6 UFA” instead of an RFA and will be eligible to sign with any team as a free agent.
In the NHL, a “Group 6 UFA” is defined as such (according to PuckPedia):

If Stephens returns from injury in time to play 12 more games with the Red Wings this year, he’ll become an RFA eligible to receive a one-year, two-way qualifying offer worth $813,750. He would also be able to file for salary arbitration.
Given that the Red Wings just traded a sixth-round pick to acquire him from Tampa Bay last summer — and he’s a player who Steve Yzerman clearly covets — it’s likely Stephens would receive that QO, although it’s possible he might try and hold out for a one-way contract (even at a lower cap hit).

It feels like Pearson has been in the Red Wings’ system forever.
The 24-year-old forward has taken a step back with the AHL’s Grand Rapids Griffins this season after emerging as one of the team’s scoring leaders in 2020–21. In 28 games with last year’s Griffins, Pearson had eight goals and 22 points; this year, he has four goals and 14 points in 34 games.
A fifth-round selection of the Red Wings from back in 2015, Pearson had a strong three-year NCAA career at the University of Maine before becoming a full-time AHLer with Grand Rapids in 2019–20. He has yet to play an NHL game.
Yzerman didn’t draft Pearson. His development appears to have stagnated, and the Red Wings will need to make room for the likes of Elmer Soderblom, Robert Mastrosimone, Theodor Niederbach, Cross Hanas, Carter Mazur, and Red Savage to join the Griffins in the coming seasons.
Like Stephens, Pearson would be eligible to file for salary arbitration after receiving a qualifying offer. However, at this point, it looks more likely than not that the Red Wings will elect not to tender Pearson his one-year, two-way QO (worth $917,831).

Not many things have gone Larsson’s way during his entry-level deal with the Red Wings.
The Swedish goaltender has performed reasonably well in Sweden’s second-tier professional league (HockeyAllsvenskan) this season, posting an 11–4–0 record with a .911 save percentage with HV71. However, the 23-year-old Larsson still has yet to appear in a single Swedish Hockey League game during his entire career.
The 2016 sixth-round pick had outstanding tenures with the USHL’s Tri-City Storm and the NCAA’s Denver Pioneers after being drafted. Unfortunately, Larsson has struggled mightily since turning professional in 2019.
Larsson posted a 2–5–0 record and a .843 save percentage in seven AHL games with the Griffins in 2019–20 and didn’t fare much better with HockeyAllsvenskan club Almtuna IS the following year (1–4–0, .883 SV%). Even after rebounding with HV71 this season, Larsson remains a very long shot to be qualified as a pending RFA.
By age 23, a goaltending prospect ideally should have already shown promise in the SHL or AHL. With Sebastian Cossa and Jan Bednar on the way, the Red Wings will likely move on from Larsson this summer.

Primarily used as an ECHL goalie during his entry-level contract with the Red Wings, Fulcher is unlikely to be qualified as a pending RFA.
The Red Wings originally signed the 23-year-old goaltender as an undrafted free agent from the Hamilton Bulldogs of the Ontario Hockey League back in 2017.
Fulcher appeared in 27 minutes of a single NHL contest with the Red Wings in 2018–19 but has otherwise played just eight games in the AHL and 41 in the ECHL over the duration of his current deal.
With the Griffins, Fulcher has posted a 2–3–2 record and an .894 save percentage; he has a career .901 save percentage and a 22–12–6 record with the ECHL’s Toledo Walleye.
Fulcher’s ECHL record this year has been very strong: 7–3–0, .924 SV%. There’s an outside chance the Red Wings opt to tender him a $787,500 qualifying offer to continue in his current role, but the 50-contract limit (and Cossa’s impending arrival) will likely prevent that outcome.

Brattstrom is still pretty new to North American hockey.
The 24-year-old AHL rookie netminder has spent the majority of the 2021–22 season with the Griffins, going 4–7–2 with an .885 save percentage in 13 games while primarily serving as @Calvin Pickard’s backup.
Of note: Brattstrom’s numbers have significantly improved in his eight games since the calendar flipped over to 2022. In those eight appearances, Brattstrom has a 3–4–1 record and a .907 save percentage (exceeding .925 in four of those games).
Prior to making the jump to North America in 2021, Brattstrom was a serviceable (if unspectacular) starting goaltender in the top-tier Swedish and Finnish men’s leagues. The Red Wings originally selected him as a 21-year-old overager in the sixth round of the 2018 NHL Draft.
If the Red Wings want to retain the services of one of their three pending RFA goaltenders, Brattstrom is likely their best bet. He has the most experience in high-level professional leagues and would cost just $787,500 to keep on a one-year, two-way qualifying offer.
It’s not hard to imagine a scenario where the Griffins carry Brattstrom, Cossa, and a veteran goaltender (perhaps Pickard) on their roster for the 2022–23 season. At this point, it appears more likely than not that he’ll be tendered a QO.