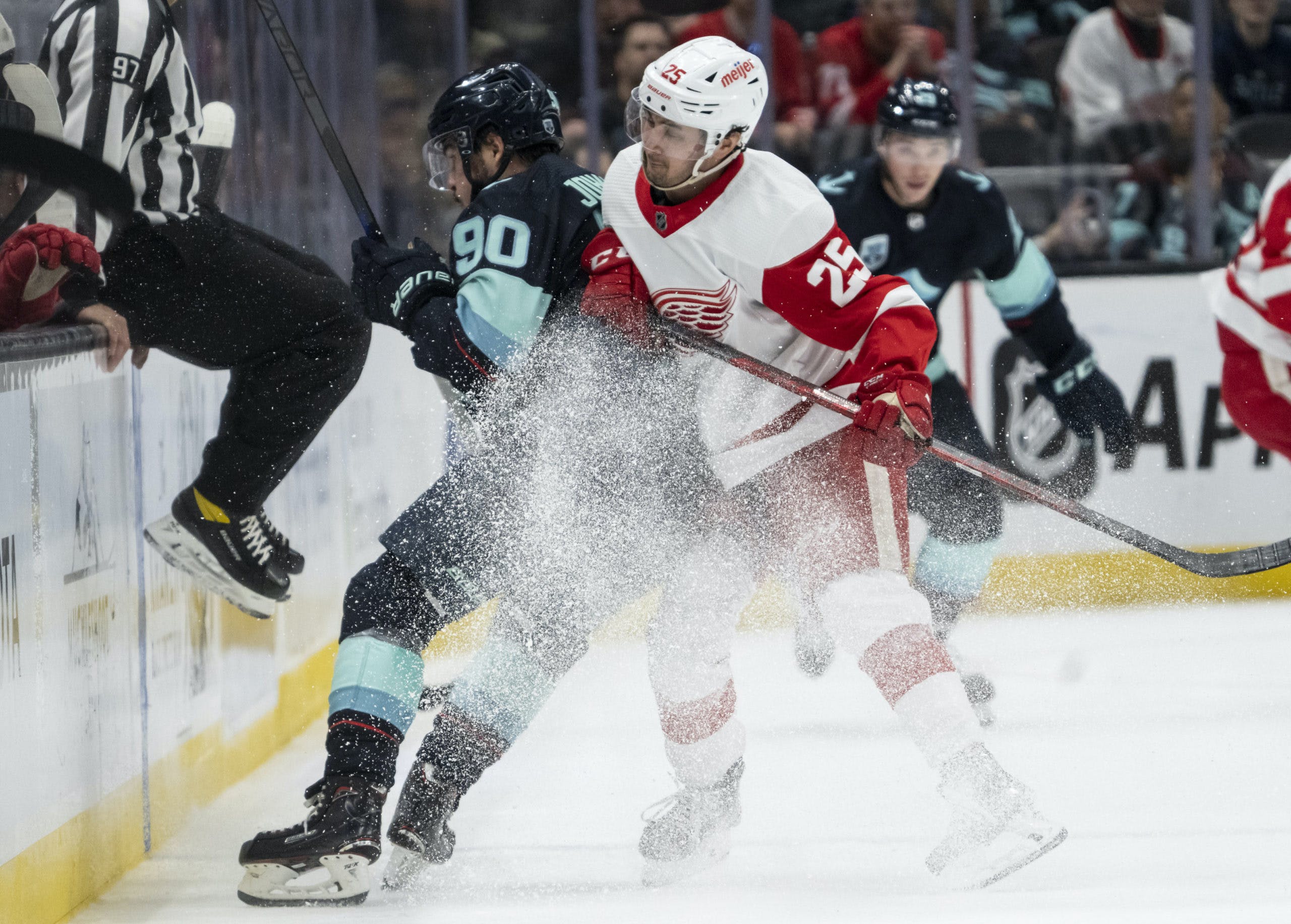 By Mike Gould
8 months ago
For two periods on Saturday, Detroit Red Wings goaltender @Alex Nedeljkovic was able to keep the Seattle Kraken at bay.
In all honestly, the Red Wings had no business carrying a 2–0 lead into the second intermission at Climate Pledge Arena. They were soundly outplayed by the Kraken in the first 40 minutes of play, generating just 38.3% of the expected goals and being out-chanced 22–5 at five-on-five.
Red Wings forward @Joe Veleno nevertheless managed to give his team a 1–0 lead at the 13:18 mark of the second period. After the Wings successfully killed a @Dylan Larkin minor penalty, the captain sped out of the box and found a wide-open Veleno for a one-timer in the low slot.
With 24 square feet of open net in front of him, Veleno made no mistake.
The Red Wings doubled their lead by capitalizing on a @Vince Dunn interference penalty in the dying minutes of the second period.
This time, it was @Taro Hirose who managed to beat Kraken goaltender @Philipp Grubauer off a @Tyler Bertuzzi feed. The 25-year-old winger is up to three points in four NHL games with the Red Wings this season.
The dam finally burst for the Kraken in the third period, as they beat Nedeljkovic three times on 14 shots before @Yanni Gourde added an empty-netter (his second goal of the period).
@Adam Larsson and @Jaden Schwartz scored 2:44 apart just prior to the midway point of the final frame — Nedeljkovic didn’t stand much of a chance on either shot — before Gourde tallied the go-ahead goal at the 13:03 mark of the period.
Seattle’s first two goals came as a result of attacking players being given time and space to beat Nedeljkovic. Gourde’s eventual game-winning marker bounced off @Moritz Seider’s skate before trickling through Nedeljkovic’s legs.
What’s a goalie gonna do?
Nedeljkovic was ultimately named the game’s second star. Despite taking the loss, his save percentage improved to .904 on the season and his goals-against average fell to 3.15.
The Kraken out-shot the Red Wings 42–23 in Saturday’s game. Seattle (19–38–6) remains the NHL’s No. 31-ranked team in the standings; Detroit (25–30–7) sits in 24th place league-wide.
The Red Wings will return to action one day after Monday’s trade deadline when they host the @Claude Giroux-less Philadelphia Flyers at Little Caesars Arena. Tuesday’s opening faceoff in Detroit is scheduled for 7:30 p.m. ET.