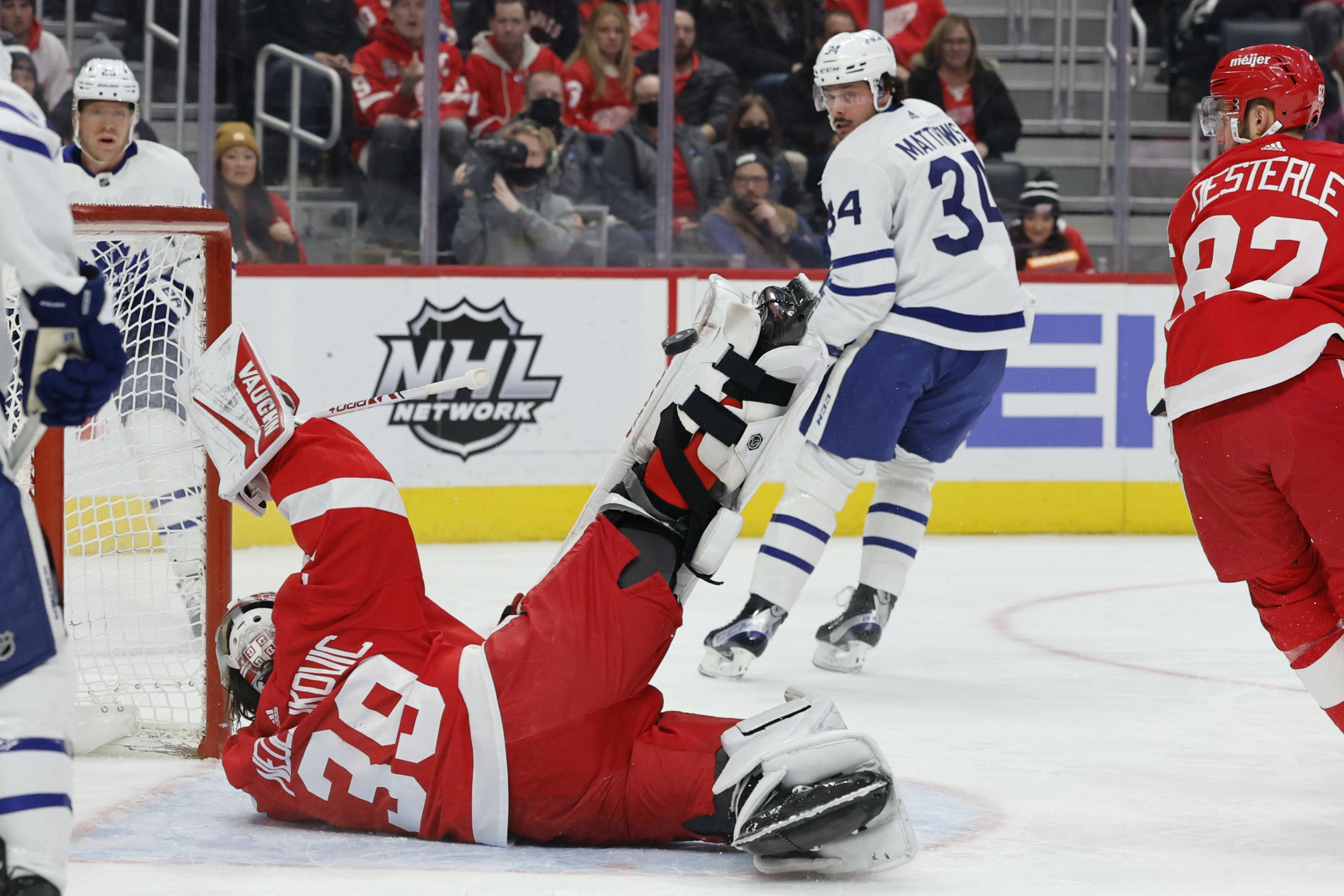 By Mike Gould
10 months ago
Put simply: they blew it.
Despite leading 4–2 with 11 minutes remaining in the third period, the Detroit Red Wings lost by a 7–4 score against the Toronto Maple Leafs on Saturday.
Leafs forward @Michael Bunting scored two goals 2:30 apart midway through the final frame to tie the game at four (completing his second NHL hat trick in the process).
Defenseman @Rasmus Sandin scored the go-ahead goal with 2:51 left in regulation, with @Mitch Marner and @John Tavares adding insurance empty-net markers to seal the win.
It was an unfortunate ending to an otherwise strong game for the Red Wings.
Team captain @Dylan Larkin mustered his fourth multi-goal effort of the season, opening the scoring early in the first period and also giving the Wings their ill-fated 4–2 lead late in the middle frame.
@Vladislav Namestnikov and @Tyler Bertuzzi also scored for Detroit, which outshot the Maple Leafs 28 to 24 through the first 40 minutes of play.
According to Natural Stat Trick, the Red Wings generated 2.55 expected goals at five-on-five during the first two periods; the Maple Leafs managed 1.91. Detroit also controlled the five-on-five high-danger chances 13 to 9 through the first 40.
Unfortunately for the Wings, the tide noticeably started to turn in the second period — and the Leafs managed to beat @Alex Nedeljkovic on the majority of their threatening scoring opportunities.
In fairness, Nedeljkovic had no chance on Sandin’s game-winner. Instead, Red Wings forward @Adam Erne became hyper-fixated on the puck and lost sight of his man streaking in from the point toward the net.
The Maple Leafs controlled the scoring chances (14 to 4), high-danger chances (5 to 2), shot attempts (16 to 11), and expected goals (1.05 to 0.55) during five-on-five play in the third period.
On top of Larkin’s two-goal night (during which he also recorded a primary assist), the Red Wings received multiple points from @Vladislav Namestnikov (one goal, one assist), @Moritz Seider (two assists), and @Robby Fabbri (two assists). Larkin and Namestnikov were respectively named the game’s second and third stars, following Bunting in first.
Having now gone six consecutive games without a regulation victory, the 19–20–6 Red Wings will return to action at home on Jan. 31 when they take on the 23–16–8 Anaheim Ducks.