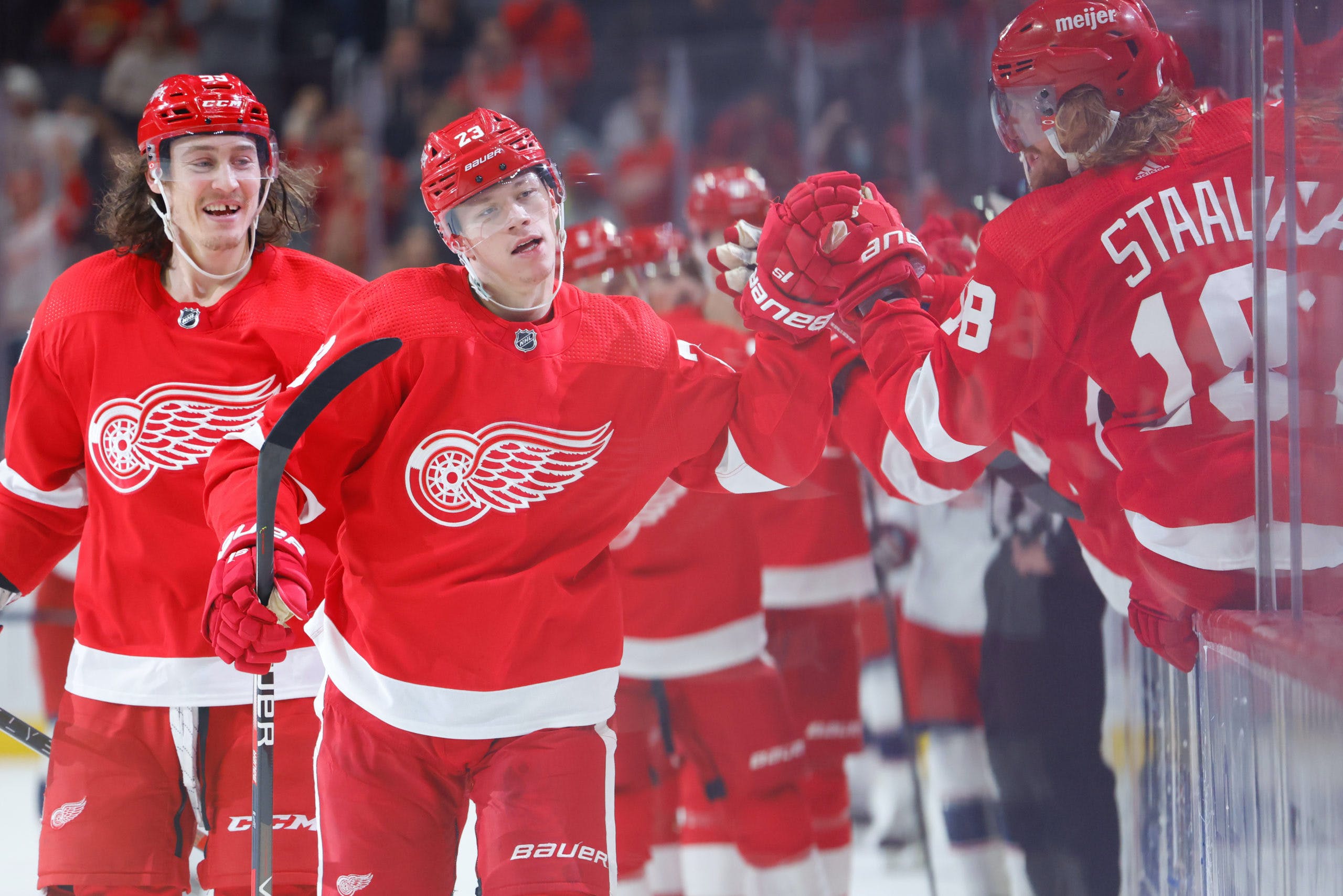 By Mike Gould
1 year ago
The Detroit Red Wings’ season-opening point streak continued Tuesday with a commanding 4-1 victory over the visiting Columbus Blue Jackets.
The Wings heavily outshot and out-chanced the Blue Jackets in the win. Both goaltenders were excellent, with @Joonas Korpisalo making 41 saves on 43 shots for Columbus and @Thomas Greiss stopping 22 of 23 at the other end.
@Lucas Raymond scored his first NHL goal for Detroit, which improved to 2-0-1 on the season. @Tyler Bertuzzi, @Vladislav Namestnikov, and @Adam Erne also scored for the Wings; @Boone Jenner tallied for Columbus, which fell to 2-1-0 with the losss.

After carrying the play for much of the first two periods, outshooting the Blue Jackets 31 to 13 in that span, the Red Wings finally solved Columbus goaltender @Joonas Korpisalo in the final frame.
It took 19-year-old Detroit rookie @Lucas Raymond firing a perfect shot past Korpisalo to break the deadlock. You might’ve read about Raymond’s first NHL goal here on WingsNation yesterday.
@Dylan Larkin and @Nick Leddy picked up the helpers on the tally, which came at the 6:17 mark of the third period.
@Tyler Bertuzzi doubled Detroit’s lead just 2:36 later, taking a pass from Larkin on a 2-on-1 and beating Korpisalo high on the blocker-side to make it 2-0. Raymond picked up the secondary assist on Bertuzzi’s league-leading fifth goal of the season.
Columbus answered back on the power play just a few minutes later, with team captain @Boone Jenner beating @Thomas Greiss with a backhand shot after taking a pass just outside the crease from @Jakub Voracek.
@Patrik Laine also assisted on Jenner’s second of the season, which came at the 12:51 mark of the third.
The Blue Jackets continued to push for an equalizer as the third period wore on but the Red Wings ultimately sealed the victory with two empty-net goals. @Vladislav Namestnikov figured into both, scoring the first before setting up @Adam Erne on the second.
Detroit ultimately took this one by a 4-1 score, out-shooting the Blue Jackets by an impressive 45-23 margin.

Why the Wings won

As was the case against Vancouver, Detroit dominated play at 5-on-5. The Red Wings won the expected goals battle 2.84 to 1.71 and outshot the Blue Jackets 37-18 at 5-on-5 (according to Natural Stat Trick).
Here’s the even-strength shot heatmap from Tuesday’s game, via NST: 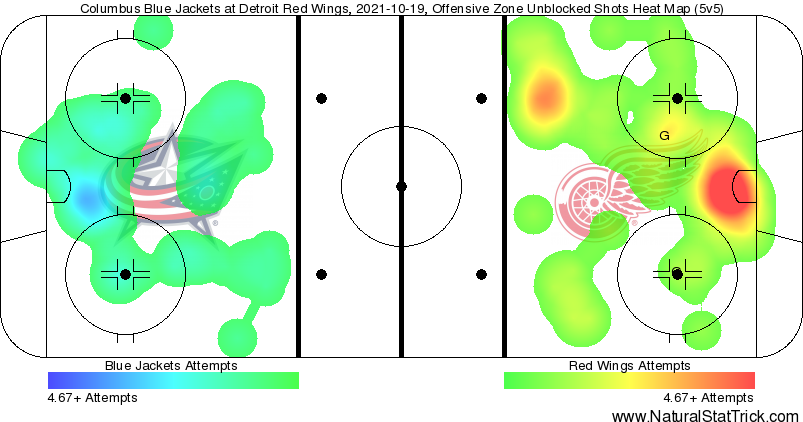 It has to be @Lucas Raymond, who picked up his second and third NHL points while finishing second on the Red Wings with a 75.43 on-ice expected goals percentage at 5-on-5.
The 19-year-old hasn’t looked one bit out of place alongside @Tyler Bertuzzi and @Dylan Larkin on the Wings’ top line. If he keeps up this play, he’ll be there all year long.