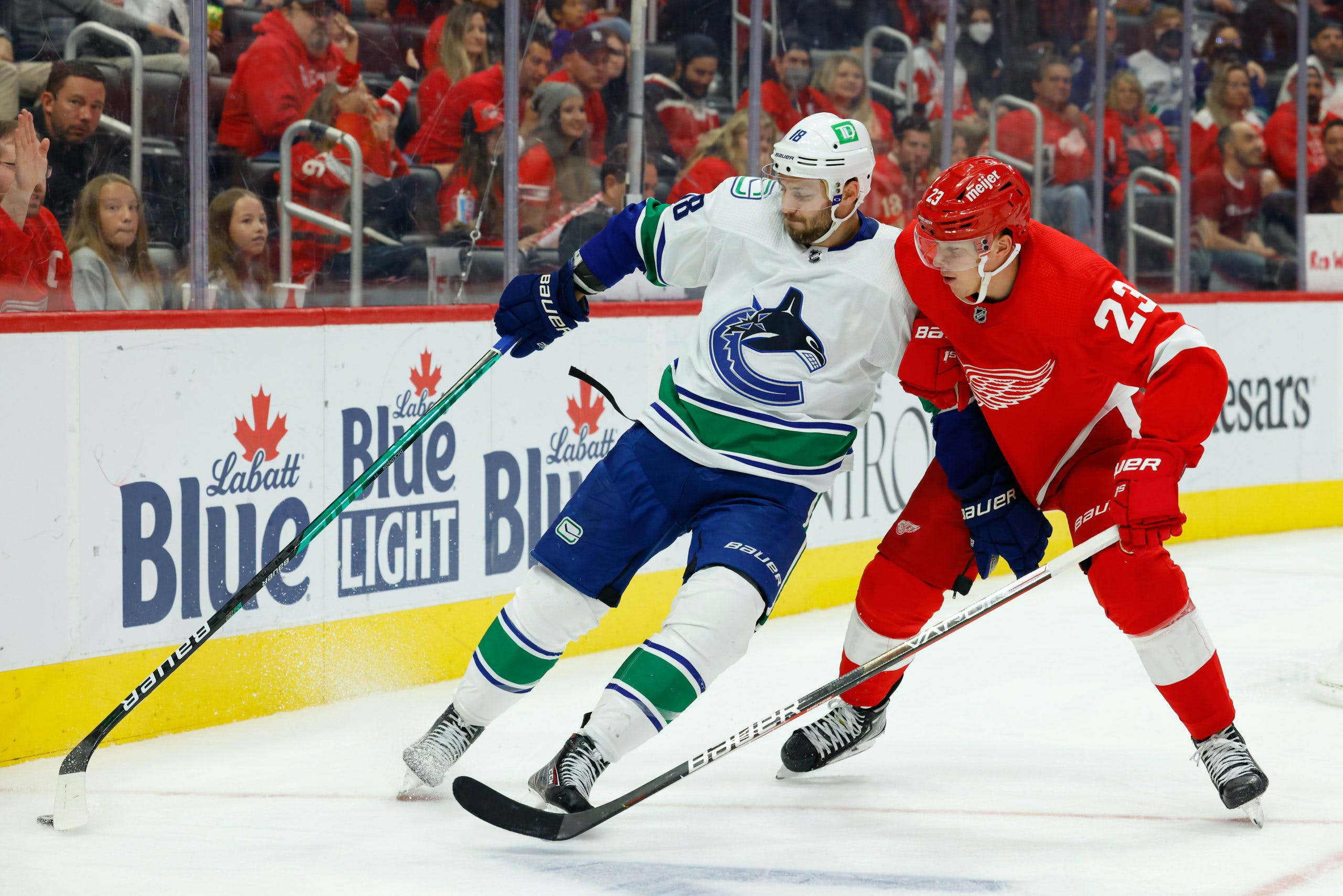 By Mike Gould
1 year ago
Compared to Thursday’s season opener, Saturday’s 3-1 Detroit Red Wings victory over the Vancouver Canucks featured nine fewer goals, one less ejection, and 100% fewer four-goal performances by @Tyler Bertuzzi.
Tampa’s 7-6 win over Detroit on Oct. 14 was a nail-biter to an extent rarely seen in the NHL, although Saturday’s follow-up contest might still have damaged a few cuticles in Michigan. The Red Wings successfully held onto a one-goal lead for much of the third period despite allowing 23 shots in the final 20 minutes.
The Red Wings only generated 21 shots and surrendered a total of 41. While the chances coming Detroit’s way weren’t always of the most dangerous variety, they all still had a chance to go in. Detroit goaltender @Thomas Greiss made 40 saves in the win, his team’s first of the season.
@Robby Fabbri, @Filip Zadina, and @Sam Gagner scored for Detroit, which improved to 1-0-1 on the year. @Conor Garland netted the lone tally for the Canucks in the loss.

The Red Wings took the lead at the 11:05 mark of the first period. Standing in the low slot, Detroit winger @Robby Fabbri tipped a low shot by @Marc Staal high over the left shoulder of Canucks goaltender @Jaroslav Halak.
Gustav Lindström picked up the secondary assist on Fabbri’s first goal of the season.
The ‘Nucks answered 4:56 into the second period. It took a perfect shot to beat @Thomas Greiss on Saturday and that’s exactly what @Conor Garland unloaded from an extremely acute angle to the left of the Red Wings goaltender.
The former Arizona Coyotes winger came around from behind the Detroit net and quickly lifted a perfect wrister over Greiss’ left shoulder to tie the game. @Bo Horvat and @Tanner Pearson picked up the helpers on Garland’s first goal as a Canuck.
@Filip Zadina restored the Red Wings’ one-goal lead just 106 seconds later, with Canucks forward @Jason Dickinson in the penalty box for hooking. You might’ve read about this goal on WingsNation yesterday evening.
The Red Wings quickly gained control of the puck in the offensive zone on the power play and started moving it around, with @Moritz Seider and @Filip Hronek playing catch up top before Seider set up Zadina for a one-timer at the right circle.
The 2018 sixth-overall pick got all of the puck and then some, absolutely wiring it over Halak’s left shoulder for his first goal of the 2021–22 season.
Vancouver continued to push for another equalizer as the second period neared its close, with the Canucks’ best opportunity coming on a 2-on-1 rush in the dying minutes.
Garland broke into the Detroit zone with the puck alongside Nils Höglander and feathered a saucer pass over to the young Swede. Höglander immediately fired a shot that Greiss was somehow able to lunge over and stop.
The game started to heat up in the third period. First, @Tyler Bertuzzi and @Oliver Ekman-Larsson took coincidental minors after a small fracas early in the frame; then, just past the halfway mark, tensions really boiled over when Garland smoked Zadina with a hard reverse hit.
Garland got dinged with a two-minute penalty on the play for an illegal check to the head. @Bo Horvat, @Michael Rasmussen, and @Filip Hronek all received two minutes for roughing.
Despite allowing 23 shots in the final 20 minutes of play, Detroit scored the only goal of the third period. With just 58 seconds remaining in regulation, @Sam Gagner scored a long-range empty-net goal to seal a 3-1 Detroit victory against his former team.

Why the Wings won

Despite being outshot 41-21, the Red Wings defended their crease pretty well and managed to hold the Canucks to just five high-danger chances at 5-on-5 in the entire game. Here’s the 5-on-5 shot heatmap for the game, via Natural Stat Trick: 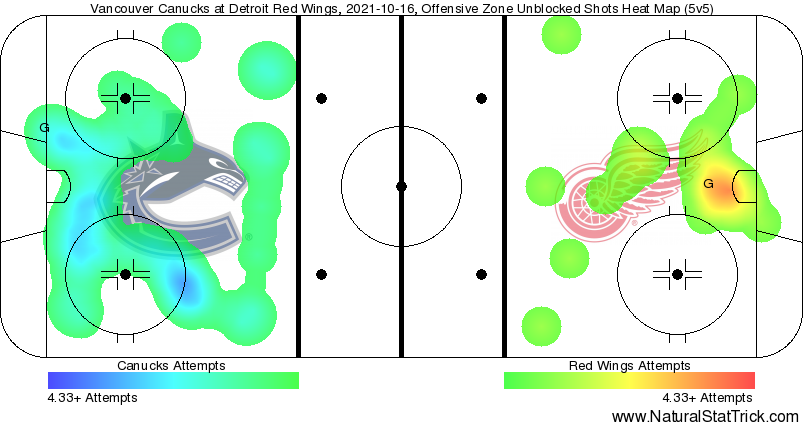 The defensive zone became a little less structured for the Wings during penalty-killing situations but @Thomas Greiss was able to keep the Canucks from scoring even once during their three power-play opportunities.

@Filip Zadina played a tremendous game on Saturday. In addition to his game-winning goal, the 21-year-old Czech winger posted an impressive 64.41 on-ice expected goals percentage at 5-on-5 (according to Natural Stat Trick).
That figure is made even better when considering the Red Wings, as a whole, only controlled 47.18% of the 5-on-5 expected goals on Saturday. Not only did Zadina pick up his first goal of the season, he consistently helped his team push the play forward during his shifts.

The Red Wings have two days off before they return to action against the Columbus Blue Jackets on Oct. 19. Puck-drop at Little Caesars Arena will go just after 7:30 p.m. ET on Bally Sports Detroit.