By Mike Gould
10 months ago
The Detroit Red Wings’ new-look top line of @Dylan Larkin, @Lucas Raymond, and @Vladislav Namestnikov had a very quiet night in Saturday’s 4–1 loss to the Nashville Predators.
Larkin and Raymond were both held to just one shot during five-on-five play; Namestnikov was one of eight Red Wings skaters (including fellow forwards @Tyler Bertuzzi, @Pius Suter, @Robby Fabbri, @Joe Veleno, and @Givani Smith) not to test Predators goaltender @Juuse Saros while his team was at full strength.
The Red Wings struggled enormously to generate any offensive opportunities during the 8:06 the top line spent together on the ice at five-on-five.
With Larkin, Raymond, and Namestnikov on the ice at even strength, the Predators attempted seven shot attempts to the Red Wings’ two and won the expected goals battle 0.21 to 0.05 (according to Natural Stat Trick).
As a team, the Red Wings barely managed to test Saros from any dangerous areas of the ice. At the other end of the ice, the Predators peppered Red Wings goaltender @Alex Nedeljkovic from in close. Saros stopped 28 of 29 shots on Saturday; Nedeljkovic made 21 saves on 24 shots in the loss.
Nashville recorded nine high-danger chances at five-on-five during regulation; Detroit managed just three. Both of Nashville’s goals at even strength came from the low slot. 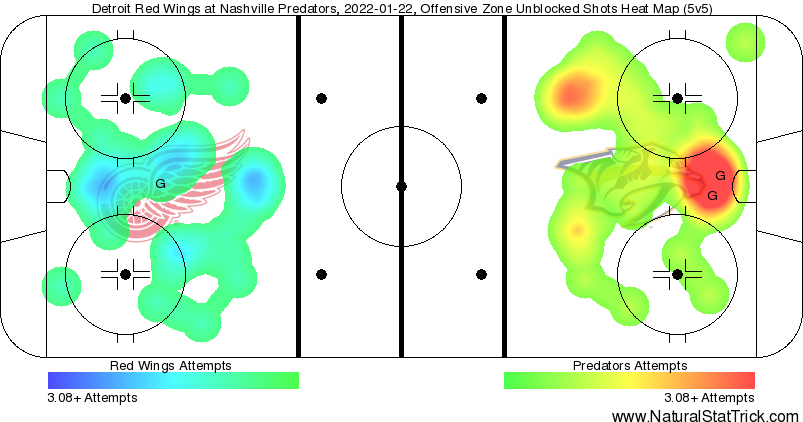 Five-on-five heat map via Natural Stat Trick.
@Michael Rasmussen led the way for Detroit with four shots in just 9:34 at five-on-five. Rasmussen played alongside @Filip Zadina and @Adam Erne for 5:58 at even strength, with the unit controlling an impressive 89.79 percent of the expected goals and 80.00 percent of the shot attempts during its shifts.
Erne scored Detroit’s only goal in the contest, picking up a stretch pass from Bertuzzi immediately after leaving the penalty box and beating Saros on the ensuing breakaway. The 26-year-old forward snapped a 20-game goalless drought on the play.
The Red Wings have now lost two consecutive games and have fallen to 3–4–3 in January 2022. They’ll have three days to practice and recuperate before they return to action against Chicago on Jan. 26.

RED WINGS GAME RECAP BROUGHT TO YOU BY DAILYFACEOFF