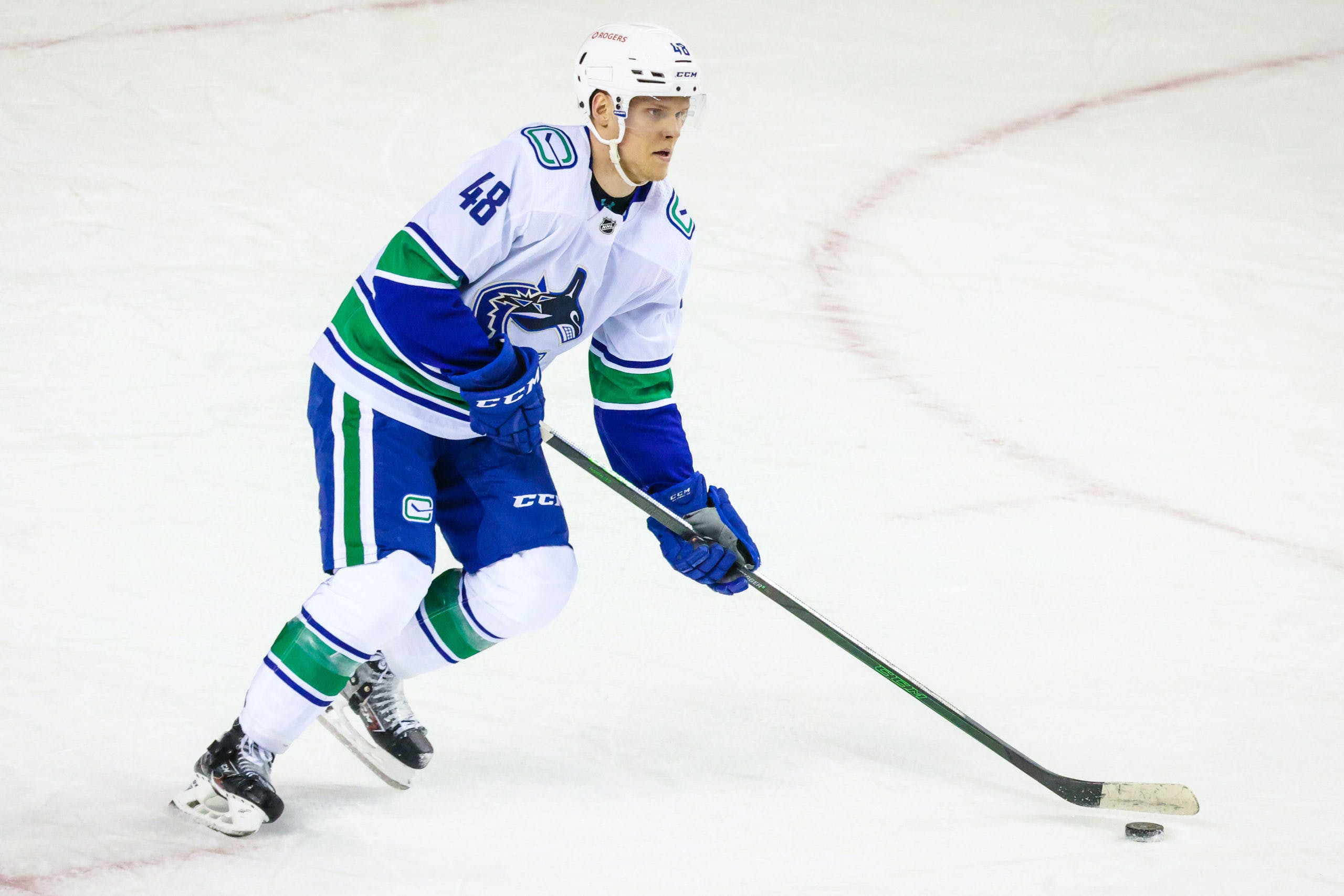 By Mike Gould
8 months ago
The Detroit Red Wings are a little short on left-handed NHL defensemen.
@Nick Leddy has underperformed since arriving in Detroit and is set to become an unrestricted free agent this summer. He’ll almost certainly be traded before then.
Marc Staal and Danny Dekeyser are also pending UFAs, but their respective contracts carry certain protections that will make it harder for Detroit to move them. (Given DeKeyser’s decline over the past few seasons, it’s unlikely the Red Wings would have been able to find a trade partner either way).
Leddy, Staal, and DeKeyser are all on the wrong side of 30 and will all be long gone by the time the @Moritz Seider and Lucas Raymond-led Red Wings are ready to contend. @Jordan Oesterle is signed through next season but doesn’t project to be more than a depth player at this point in his career.
The Red Wings have plenty of promising defensive prospects who play the left side, including Simon Edvinsson, Albert Johansson, Shai Buium, William Wallinder, and Jared McIsaac. With the possible exception of Edvinsson, it’s unlikely that any of those players will be patrolling the Red Wings’ blue line next season.
Red Wings general manager Steve Yzerman has proven himself more than willing to take low-risk gambles on reclamation project-type players during his tenure. @Robby Fabbri has worked out nicely, @Adam Erne has been hit-and-miss, and the jury’s still out on @Mitchell Stephens.
When the Florida Panthers waived defenseman Olli Juolevi on Saturday, the Red Wings saw an opportunity to add a U-25 player with National Hockey League experience who could potentially slot in and fill a void left by one of their pending UFAs.
Pardon the pun, but the Red Wings pounced on the now-former Panther.
Juolevi, 23, has been through a lot in his young professional career. Controversially selected by the Vancouver Canucks one spot ahead of @Matthew Tkachuk at the 2016 NHL Draft, Juolevi suffered multiple injuries in the following seasons and appeared in just 24 NHL games with Vancouver before being dealt to Florida just before the start of the 2021–22 campaign.
The Panthers traded forward @Juho Lammikko and @Noah Juulsen to the Canucks in exchange for Juolevi. Stuck behind a deep defensive group in Florida, Juolevi played in 10 games with the team before being waived on Saturday. He averaged 12:27 per night and did not register a point during his time with the Cats.
@MacKenzie Weegar, @Gustav Forsling, and @Lucas Carlsson stood in the way of Juolevi getting more reps in with the Panthers. Juolevi should face significantly fewer obstacles in Detroit, especially if Leddy is dealt prior to the Mar. 21 trade deadline.
Back in 2016, Juolevi was a highly-touted prospect who was widely expected to be a top-10 draft selection. TSN’s Bob McKenzie had him ranked as the sixth-best player available that year. During his time with the London Knights of the Ontario Hockey League, Juolevi looked like he could be a star in the making.
As they so often do, injuries got in the way of Juolevi’s upward trajectory. After scoring 13 points in 18 American Hockey League games as a 20-year-old, Juolevi suffered a season-ending knee injury that required surgery. The following year, Juolevi dealt with hip issues that caused him to miss a month of action.
Juolevi’s various afflictions have impacted his skating in recent seasons, with CanucksArmy editor David Quadrelli questioning his ability to pivot and defend on the rush with the AHL’s Utica Comets in 2019–20. (For what it’s worth, Quadrelli also added that Juolevi’s skating looked much better at the Canucks’ mini-camp prior to the 2020 bubble playoffs).
Here’s what CanucksArmy‘s Chris Faber had to say about Juolevi’s performance in Vancouver during the shortened 2020–21 season, in which he scored two goals and three points in 23 games while posting solid (if unspectacular) underlying metrics:

The big success in Juolevi’s development is that he has been able to stay healthy all season long. He has proved that his game is NHL ready and though he didn’t overachieve this season, he has accomplished another step in reaching his potential.
He has proven that he can play at the NHL level.
There’s still work to do for him to become a top-four defenceman and right now, the most you can rely on him in one game seems to be 15 minutes. In only four of his 22 games has he been asked to play more than 15 minutes of ice time. His quality of competition has been very easy with much of his time coming against bottom-six lines.

The Red Wings shouldn’t set their expectations too high with Juolevi, but they also have nothing to lose at this point by giving him a fair shot.
Juolevi will become a restricted free agent this summer and currently commands the league-minimum salary of $750,000. If he proves himself capable of handling even bottom-pairing minutes, the Red Wings might actually have a player they can slot in on the left side beyond this season.
@Moritz Seider has spent much of the 2021–22 season playing next to Danny DeKeyser, who might be in tough to get another NHL contract after his current deal expires. Who’s to say that Juolevi couldn’t eventually get a turn in that spot? The Red Wings have plenty of room to help a young left-handed defenseman grow into an NHL role.
The Red Wings have 26 games remaining in their 2021–22 schedule. That leaves lots of time for Juolevi to be tested. If it doesn’t work out for him in Detroit, no harm done — his contract is a drop in the bucket and the Red Wings aren’t making the playoffs this season.
On the other hand, what if Juolevi is able to find his game with the Red Wings? It wouldn’t be the first time that a struggling young player ended up making a home for himself in Detroit.