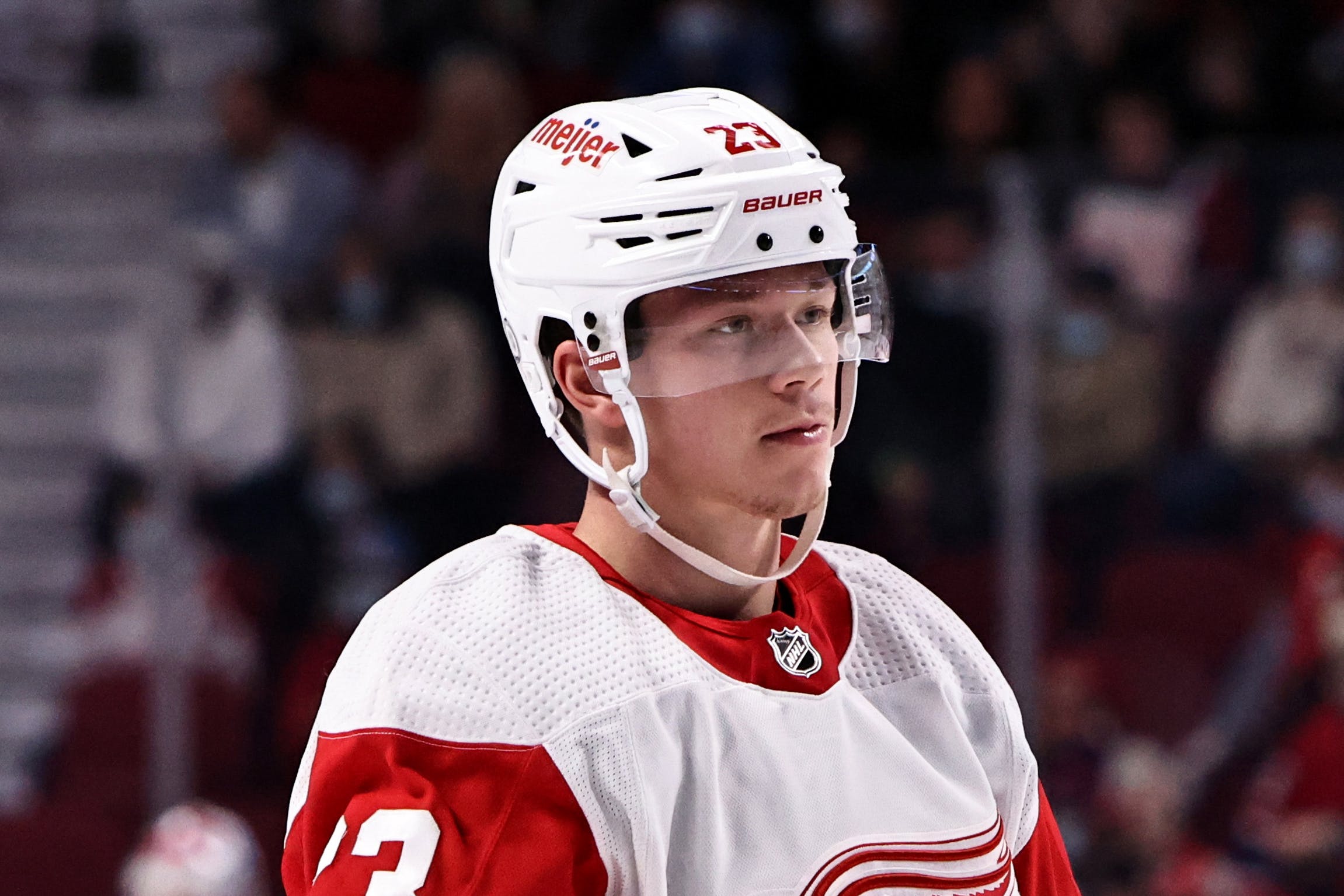 By Mike Gould
1 year ago
@Lucas Raymond has impressed Detroit Red Wings fans everywhere with his stellar play over his first 16 National Hockey League games.
Raymond has received national attention for his efforts and currently leads all NHL rookies with six goals and 15 points.
The first Red Wings fan Raymond needed to impress to force his way into the NHL lineup was none other than Erica Blashill, the wife of head coach Jeff Blashill.
“It should be clear to my wife that [Raymond] should be on the hockey team,” the head coach told reporters in September during the Wings’ training camp.
Evidently, Mrs. Blashill took notice of Raymond’s play. Perhaps Jakub Vrána’s long-term absence opened the door for the 19-year-old winger to crack the lineup, but make no mistake — when Vrána returns, Raymond isn’t going anywhere.
Raymond led the Red Wings in pre-season action with six points in six games. He then picked up his first NHL point in his debut (a wild 7-6 overtime loss to the Tampa Bay Lightning), kicking off an impressive tic-tac-toe passing play to set up @Tyler Bertuzzi’s third of four goals in the game.
Two games (and six nights) later, Raymond notched his first NHL goal. It was no less impressive than his first point.
Little Caesars Arena has likely never been louder since it became the home of the Red Wings in 2017.
Raymond has been a consistent producer throughout his first 16 NHL games, recording at least one point in nine of them. He picked up his first NHL hat trick in Chicago on Oct. 24 and added three assists in Buffalo on Nov. 6.
In addition to racking up points, Raymond has been one of the best offensive play-drivers in the entire league. He’s certainly been one of the league’s most impactful rookies to this point in the 2021–22 season.
According to Evolving-Hockey’s Goals Above Replacement (GAR) model, Raymond currently ranks third among NHL rookies — behind New Jersey Devils standout @Dawson Mercer and Red Wings teammate @Moritz Seider — with 2.5 total GAR this season.
Raymond has provided Detroit with the majority of his value through his play in the offensive zone (primarily at 5-on-5) and his plus-three penalty differential.
The Red Wings have peppered their opponents with chances during Raymond’s shifts at even strength. According to Natural Stat Trick’s model, Detroit has averaged 3.33 expected goals per 60 minutes (xGF/60) with Raymond on the ice at 5-on-5.
Among NHL forwards with at least five games played this season, Raymond’s on-ice xGF/60 rate ranks seventh. The six attackers ahead of him? 2021 Calder Trophy finalist @Jason Robertson, Carolina Hurricanes star @Andrei Svechnikov, underrated Calgary Flames wingers @Andrew Mangiapane and @Dillon Dube, Toronto Maple Leafs leading scorer @William Nylander … and, of course, @Connor McDavid.
Detroit has outshot its opponents 132–107 with Raymond on the ice at 5-on-5. He’s helped the Wings outscore their opposition 11–8 during his shifts, a margin that closely matches Raymond’s on-ice expected goal differential of 11.24–9.03.
Raymond’s on-ice shooting percentage is a mere 8.33, the 177th-best figure among the NHL’s 352 forwards with at least 100 minutes played at 5-on-5 this season. His current level of production is not being juiced by lofty percentages.
It looks like Raymond is for real.
Raymond currently ranks as PointsBet’s odds-on favorite to win the Calder Trophy as the NHL’s top rookie for the 2021–22 season.
PointsBet lists Raymond’s odds to capture the Calder at +400, narrowly ahead of Anaheim Ducks upstart @Trevor Zegras (+650) and Seider (+750).
Regardless of whether Raymond takes home any hardware, he’s already a cornerstone of this Detroit Red Wings team. Just 16 games into his NHL career, Raymond is helping to lead the charge toward what would be an incredibly unlikely playoff berth for a Red Wings team that finished 27th in the league last season.
The future is now for the Detroit Red Wings, and Lucas Raymond is rightfully at the forefront.
Uncategorized
Recent articles from Mike Gould